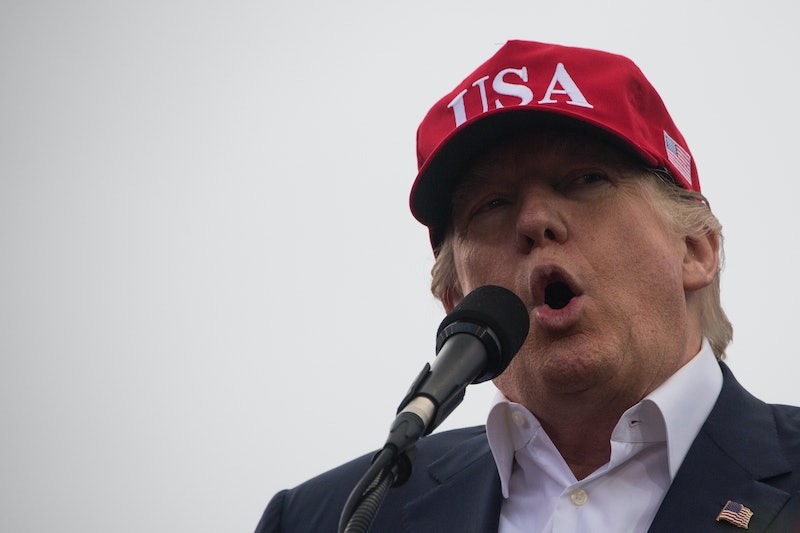 It's been over a month since it became official, and now, it's just under four weeks until Donald Trump will take office as the next President of the United States — I know, it still stings to say it. People everywhere are nervous, to say the least, as every passing day brings with it news of a racist cabinet nomination, inexperienced advisory appointment, or an inappropriate late-night Twitter rant from the man whose going to be the the mouthpiece for our entire country. But because its the holiday season, a time of not hopelessness and despair but rather optimism and goodwill, I'm gathering books I wish I could give the president elect for Christmas. He may not understand the basic concepts of kindness, acceptance, and tolerance, but maybe with a little help from Dr. Seuss, the soon-to-be Commander and Chief can learn a thing or two about manners? I like to think its never to late to change.

Books are wonderful, magical tools with the power to transport you to another time and place, the ability to let you walk in someone else's shoes, and the influence to change your thoughts and beliefs. From picture books that share lessons about sharing and bullying to novels that expose untold stories of hardship to nonfiction reads that expose the often overlooked truths about our everyday realities, books are powerful enough to even influence the most stubborn of minds.

Forget about sending a wish list to Santa this year — even he can't change the results of the election — and instead consider sending a note to your soon-to-be president or other elected officials, laying out your concerns and priorities for the new year. If that doesn't work, join me in my campaign to gather these 11 books I wish I could send to the president elect, because books have the power to do anything, even grow a heart that is two sizes two small.

1. If the World Were A Village: A Book about the World's People by David J. Smith

A beautiful and simple picture book meant to promote world-mindedness, If the World Were a Village is the perfect present for the president elect. By imagining the entire planed, all 6.8 billion people, as a village of only 100 people, this children's book strives to show readers how differently other people live, and how each of us can live better lives as engaged global citizens. Sound like a lesson that needs teaching? I thought so, too.

Speaking of childhood lessons that could benefit the future president, Marlene, Marlene, Queen of Mean teaches a very valuable one Mr. Trump apparently missed in grade school: bullying is wrong. In this bright and bold picture book by actress Jane Lynch, Marlene, the mean queen of the school, scares and intimidates her classmates so she can get everything she wants — that is, until someone finally stands up to her and shows her how to be a better person, and a better friend. What do you say, America, do you think we can teach our future president the same thing?

3. Asking for It: The Alarming Rise of Rape Culture and What We Can Do About It by Kate Harding

Now that he is going to be the most powerful man in America, it's about time Donald Trump started standing up against rape culture, instead of being a driving force behind it. Kate Harding's Asking for It can teach the president elect all about what the term means, how we contribute to it every day in ways we don't realize it, and what we can do to stop it. Maybe he will finally learn why his "locker room talk" was so much more than that.

4. The Book of Unknown Americans by Cristina Henríquez

The perfect book for him to read on his next trip to Mexico, The Book of Unknown Americans should be at the top of Mr. Trump's TBR list. A beautiful, heartbreaking story about the love between two young people from immigrant families, Cristina Henríquez's stunning novel is filled with the very real conflict, violence, and hatred facing millions of people in America today, but it is also filled with the sense of hope that gets everyone through another day (and the next four years.)

5. The New Jim Crow: Mass Incarceration in the Age of Colorblindness by Michelle Alexander

An eye-opening examination of the major racial issues facing America today, including the mass incarceration of young black men in our nation's cities, The New Jim Crow is a must-read for every politician, but especially one supported by the alt-right, white supremacists, neo-Nazis, and the KKK. A scholarly yet accessible critique of the criminal justice system and other institutionalized racism at play in our modern world, Michelle Alexander's proves colorblindness isn't the solution, but rather a more dangerous problem.

6. Behold the Dreamers by Imbolo Mbue

Another brilliant and beautiful fictional portrayal of very real issues facing millions of Americans today, Behold the Dreamers should be required reading before inauguration day. The Jongas moved from Cameroon to give their son a better life, and they find exactly what they're looking for: steady employment, opportunity for advancement, financial stability. That is, until it all comes crashing down and the Jongas are forced to make the same hard choices millions of hardworking immigrants are forced to make all the time. A powerful story, Behold the Dreamers is the painfully realistic story the future president needs to read.

7. The Handmaid's Tale by Margaret Atwood

If Donald Trump needed one book to teach him all the lessons he needed to know, Margaret Atwood's The Handmaid's Tale might just be it. A dystopian vision of a world where women are defined by their sex and their ability to bear children, the lower class is almost entirely ignore and taken advantage of, minorities are disenfranchised and even relocated from their homes, the future president may learn that this nightmare fiction is not too far off from the future he has promised the nation. And hey, if he doesn't have time to read the classic novel, there's always hope he will catch the TV adaptation on Hulu.

8. Shrill: Notes from a Loud Woman by Lindy West

Humorist, writer, and author Lindy West is no stranger to putting people in their place, opening their eyes up to their wrong and damaging ways, and shouting over men who insist on drowning out women's voices. Her memoir, Shrill, could open Mr. Trump's own eyes to body positivity and fat acceptance, rape culture, sexism, feminist theory, and a whole long list of topics the president of this country should understand. At the very least, maybe it could show him how damaging Twitter trolling is — maybe.

9. We Should All Be Feminists by Chimamanda Ngozi Adichie

The title says everything Mr. Trump, needs to know: we should all be feminists, especially the future president of a nation whose majority is made up of females. This small, short pocket guide to why feminism and the fight for equality is essential to everyone, not just women, is the perfect quick read for a man as busy as the next president-in-training.

10. Just Mercy: A Story of Justice and Redemtion by Bryan Stevenson

If there is a quality our president should get to know, it's mercy. Perhaps Bryan Stevenson's groundbreaking book can teach him all about it by exposing him to the stories of those who need it the most: poor people, the wrongly condemned, women, and children.

11. Rachel and Her Children: Homeless Families in America by Jonathan Kozol

It's not uncommon for a politician to be out of touch with the people they represent, but our incoming president brings that to a whole other level. With the help of Jonathan Kozol's eye-opening Rachel and Her Children, a book exploring the realities facing the hundreds of thousands of homeless families in America, Trump can see the side of America he has never experienced, but one he will be charged with leading and protecting.

More like this
The 20 Best Audiobooks To Fall Asleep To
By Aoife Hanna and K.W. Colyard
President Zelensky Spoke Out On Ukraine's Chances Of Hosting Eurovision Next Year
By Sam Ramsden
How Reality TV Stars Conquered Your Bookshelves
By Anna Peele
10 Must-Read New Books Out This Week
By K.W. Colyard
Get Even More From Bustle — Sign Up For The Newsletter