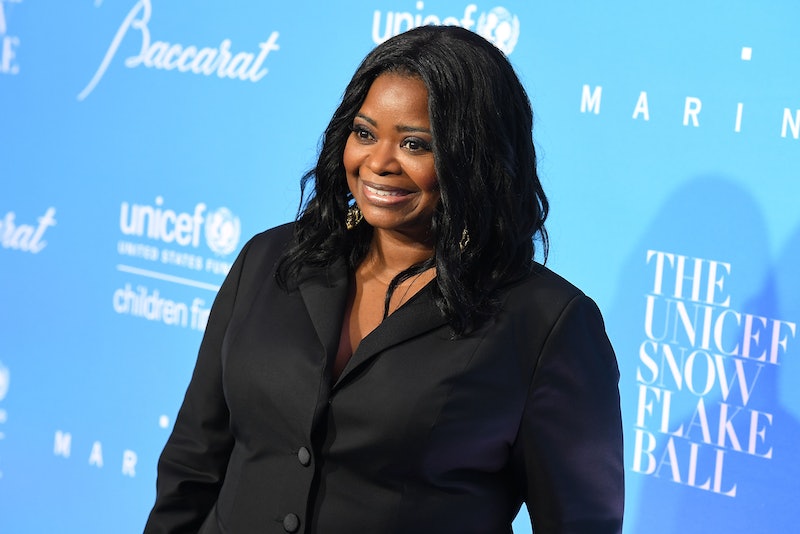 As all pop culture fans know, awards shows tend not to be particularly inclusive when it comes to honoring African Americans, Asians, Hispanics, and other minorities. But as I've realized over the years, there's also a real lack of plus-size actors, especially women, nominated as well. This year, it looks like there is only one plus-size Oscar acting hopeful this year, according to most Oscar nominations predictions: Hidden Figures' Octavia Spencer. The lack of other plus-size actors in contention is truly disappointing, as audiences deserve an award season that reflects reality and honors people of all different sizes.

Considering that an estimated 67 percent of American women are plus-size (size 14 or larger), according to Bloomberg, film representation is incredibly low. The CDC reports the average American woman’s measurements equate to a size 14, but full-figured women account on average for just 1-2 percent of the bodies represented in mainstream media. And in Hollywood, the idea that plus-size women are less worthy of leading roles is constantly perpetuated. In the last few years, several notable plus-size stars like Melissa McCarthy, Danielle Brooks and Ashley Graham have spoken up about body positivity and representation, but awards season, in particular, tends to honor only straight-size women.

In the past 10 years, just three plus-size women have won acting Oscars: Jennifer Hudson, Mo'Nique, and Octavia Spencer (and those have all been for supporting roles — I've found that in over 30 years, no plus-size woman has taken home an Oscar for Best Actress). As a plus size woman myself, I'm frustrated with that low number, as it shows the harsh realities of the lack of body positive representation in Hollywood, especially in Oscar-worthy movies.

The film industry rarely casts full-figured women in lead roles and if they do, they tend to be used as comedic relief, like Melissa McCarthy in Bridesmaids or Rebel Wilson in Pitch Perfect. We rarely see plus-size women in true leading roles, especially in Oscar-worthy movies. This needs to change, and the stigma around casting plus-size stars in major parts needs to go. Just look at how unfair the situation was for Jennifer Hudson, who, after losing 80 pounds in 2010, was shocked at how different her experience was in Hollywood after losing weight. "But the truth is, so many more opportunities open up when you’re on the other side, as I am now. I’d no idea what I was missing out on. It’s like a whole other world. Suddenly every designer wants to dress you. It’s like, “You look amazing! Please, choose a dress. Have a bag. And what about shoes?” I mean, wow!" Hudson told The Daily Mail. The fact that this happened for Hudson, an Oscar-winning actor, only after she lost weight makes my heart drop.

As a plus-size woman, I know what it's like to feel that if you aren't straight-size in this society, you will be declared second-best. It's up to the media to change things, as people's perceptions of others are hugely affected by what they see on TV and in movies. Plus-size women need to be given roles that aren't just supporting parts or overlooked characters. And it needs to happen now; out of what I've deemed the 50 biggest films of 2016 so far, there are no plus-size women in leading roles, with only one movie (Hidden Figures) featuring a plus-size woman in a supporting role.

Plus-size women deserve leading roles just as much as their straight-sized peers, and films, especially those being honored in awards season, should reflect reality, in order to make real, positive change when it comes to the representation of all women on-screen.

More like this
Here's How To Practice Self-Love In Small Ways Every Day
By Mackenzie Sylvester
Jake Daniels Just Became The UK’s First Active Football Player To Come Out As Gay Since 1990
By Sam Ramsden
Simply Sayo Doesn’t Consider Kpoetry Hard Work
By Jessica Morgan
Sandra Bullock, Girlboss Extraordinaire
By Matt Harkins & Viviana Olen
Get Even More From Bustle — Sign Up For The Newsletter