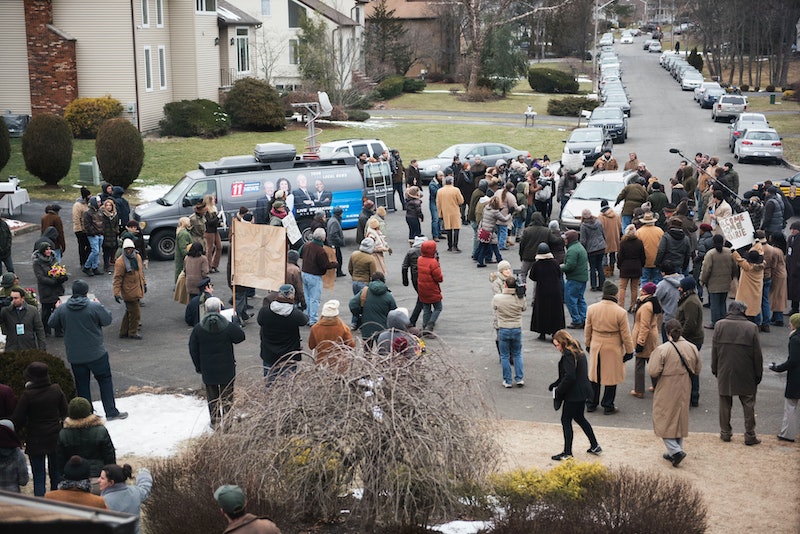 In a modern social climate where it feels like mass shootings are more prevalent than ever, TV shows often try and make sense of the tragedies that befall communities all over the world by depicting such events of their own. Spoilers for The OA ahead. But that's not exactly the case with The OA 's school shooting, as the tragedy is less about its real world implications and instead connects to the series' much more mystical elements. In fact, we don't even know who the shooter is on The OA, because the series barely focuses on them.

The OA introduces a lot of mysteries throughout its first season and ends with some pretty major cliffhangers. While a lot of the loose threads may be more compelling or out-there to theorize about (for example: Is the angel who performs interpretive dance to create multidimensional portals telling the truth?), the lack of identity for the shooter feels like an overlooked detail in a show that usually pays close attention to even the smallest details. Furthermore, the shooting seems to come out of absolutely nowhere and happens completely independently of the main plot. Is the show intentionally withholding information about the shooter to answer that mystery in a potential Season 2?

The final 10 minutes of The OA's inaugural season felt reminiscent of the "Evan" PSA that recently went viral. A peaceful cafeteria scene is suddenly interrupted by a burst of violence — but the way it's presented very obviously intends to shroud the identity of the shooter in mystery. When Prairie's group performs the five movements, one can only imagine that everyone else in the room, including the shooter, is incredibly baffled and confused at what they are witnessing — and yet that's never truly shown to the audience.

The only time viewers glimpse the shooter is when they are getting tackled by a cafeteria employee, after they've been distracted by the movements. Then the camera cuts to Prairie, who has been shot and is taken away in an ambulance, thus providing no resolution for the massive, violent intrusion into these character's lives. If the showrunners are purposely trying to hide the identity of the shooter, they are likely setting up a major reveal for Season 2 (should The OA get a second season).

There are a few possibilities for who committed the season-ending act of violence, but nothing concrete. It looked like a student, but it certainly wasn't any of the main characters, as they were in the frame at the same time. There's a chance that the shooter was the student that Steve attacked early in the series, but even that is a long shot. The OA simply hasn't introduced many high school characters that aren't part of Prairie's main group.

Another possibility is that the shooter was someone who has a connection to Prairie's past — either in Russia or with Hap — and sought to hurt her friends. Yet another possibility is that the shooter has a connection to the FBI, as there are many theories that Prairie's FBI therapist was involved in some kind of cover-up of Hap's experiments. There are no clear answers to this question, but if this mystery was intentionally left unresolved, I wouldn't be surprised if it becomes a theme in future seasons of The OA.

More like this
Michael & Kathleen Peterson’s House From ‘The Staircase’ Has New Owners
By Kadin Burnett and Kayla Blanton
The Time Traveler’s Wife Book Has A Heartbreaking Ending
By K.W. Colyard
Twitter Got *Very* Emotional Over 'The Split’s “Perfect” Finale
By Sam Ramsden
Everything To Know About A Million Little Things' Reported Final Season
By Brad Witter
Get Even More From Bustle — Sign Up For The Newsletter