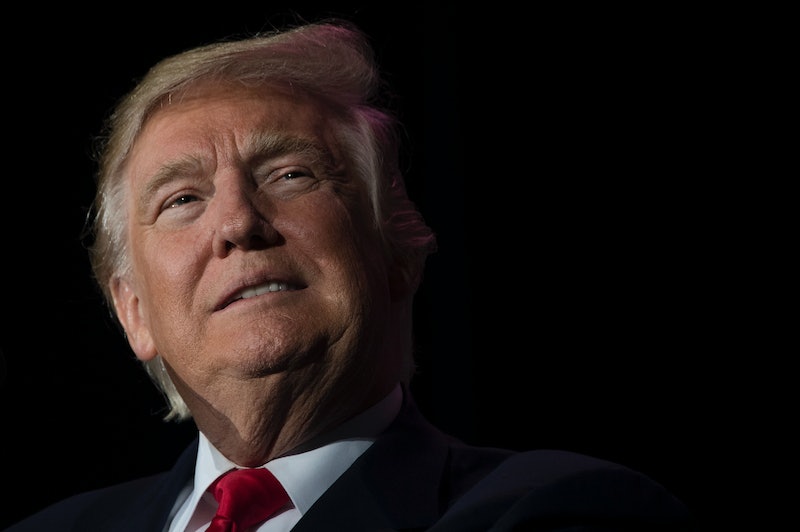 According to ThinkProgress, members of the Trump Organization allegedly encouraged the Kuwaiti Embassy to hold its annual National Day celebration in one of Donald Trump's hotels — instead of the hotel it normally used — after Trump won the November election. ThinkProgress' editor-in-chief claimed that the embassy supposedly canceled its contract with the Four Seasons and allegedly booked the event at Trump's Washington D.C. hotel instead. A spokesperson for Trump didn't return Bustle's request for comment.

Normally, the Kuwaiti Embassy holds its National Day event at the Four Seasons, and it had signed a contract with that hotel earlier in the year. But ThinkProgress claimed that members of the Trump Organization reached out to Salem Al-Sabah, Kuwait's ambassador to the United States, after the election, and allegedly pressured him to move the event to the Trump International Hotel in Washington D.C. ThinkProgress also alleged that Kuwait subsequently signed a contract with that hotel; a representative from the Kuwaiti Embassy did not confirm or deny this to ThinkProgress, and the embassy didn't respond to inquiries from Bustle on the matter.

If Kuwait did indeed book an event at Trump's D.C. hotel after the election, as the allegations claim, it wasn't the only Middle East country to allegedly do so. Earlier in December, Bahrain celebrated its own national day at the Trump International Hotel, according to Politico. Reportedly, the Azerbaijani embassy is also planning on co-hosting an event at the same hotel in celebration of Chanukkah.

Trump's business holdings in America and abroad have raised questions about the possibility of a conflict of interest arising during his administration. Some have argued that Trump risks running afoul of the Emoluments Clause of the Constitution, which prohibits officeholders from accepting gifts from foreign governments. However, the text of the clause is somewhat vague. Here's what it says:

No Title of Nobility shall be granted by the United States: And no Person holding any Office of Profit or Trust under them, shall, without the Consent of the Congress, accept of any present, Emolument, Office, or Title, of any kind whatever, from any King, Prince, or foreign State.

Whether or not this would apply to foreign governments staying in Trump hotels is unclear, and legal scholars aren't in complete agreement. Some believe that, if Trump sells any goods or services above market value to a foreign government, that would constitute an emolument; others have argued that the Emoluments Clause doesn't apply to the president at all.

Part of the confusion stems from the fact that nobody with anything resembling Trump's business portfolio has ascended to the presidency before, so there's no precedent for dealing with the types of situations that could arise. But Trump will be sworn in on Jan. 20, so we'll find out soon enough.