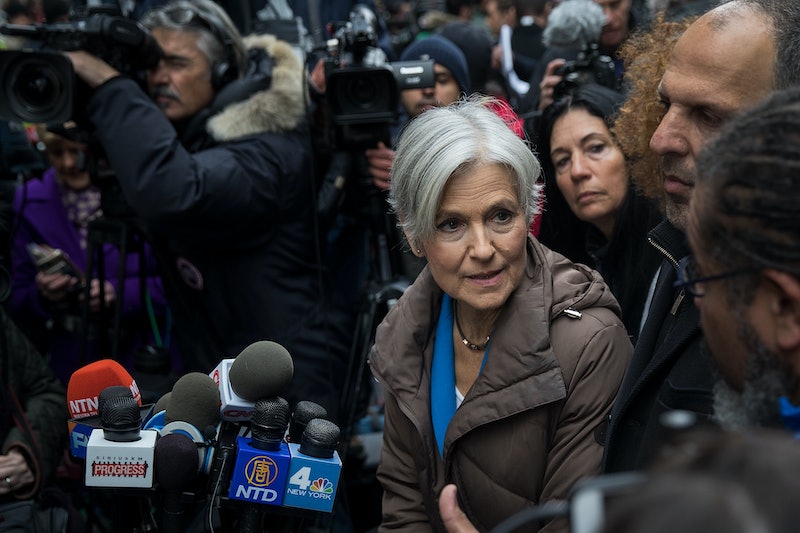 The Electoral College has voted and Donald Trump will officially be the next president of the United States. But just because he cleared the 270 electoral votes he needed to win the presidency doesn't mean there weren't those who defected. In the end there were six faithless voters, those who went against their state's vote: Four Democratic electors in Washington and two Republicans in Texas. These voters wrote in their own candidates, including Ohio Gov. John Kasich, former congressman Ron Paul and Democratic presidential nominee Bernie Sanders. But, did any faithless voters end up voting for Jill Stein?

According to the final count, Stein received zero votes from faithless electors. Unlike the above mentioned write-ins, Stein was actually on the ballot in a majority of states as the Green party candidate. She earned 1.4 million popular votes, which gave her 1 percent of the general election vote. While she didn't earn a single electoral vote in the election, the fact that Stein's been a vocal supporter — and monetary backer — of a recount that gave Clinton voters hope in Wisconsin, Michigan and Pennsylvania made her seem like a possible choice for those who wanted to shake things up. Not to mention a fitting choice for those electoral voters who really wanted to stick it to Trump.

While Stein didn't earn any votes of her own, there were women not named Clinton who did get some love from the faithless voters. The Electoral College doesn't just vote for president, but vice president too; it's here that the faithless voters broadened their choices. Former Republican presidential nominee Carly Fiorina received one electoral vote from someone in Texas. Faithless voters in Washington gave their votes to Sens. Elizabeth Warren, Susan Collins and Maria Cantwell, all of whom received one electoral vote. Winona LaDuke, an environmental activist who was Ralph Nader's running mate in 2000, also received a vote for vice president from a Washington voter. It should be noted that an elector who does not vote for the party's candidate in Washington could face a fine of up to $1,000, meaning these people were willing to put their money where their vote is.

While these electors who opposed Trump, and in the case of Washington state, Clinton, were unable to change the result of the election they did manage to make a little history. According to CNN, this is the first election since 1872 in which there was more than one faithless elector when it came to the presidential vote. For someone like Stein, who through her recount efforts has been fighting to "ensure the integrity of our elections," this should be a sign that the electors do have power. They can make sure their voices are heard — even when they are not in the majority.

The faithless electors may not have won this battle, but they certainly haven't lost the war. In the four years ahead, these voices of dissent will be needed to make sure that our electoral system stays honest. Can't imagine Stein isn't happy to know that there are passionate people on her side — even if they didn't vote for her.