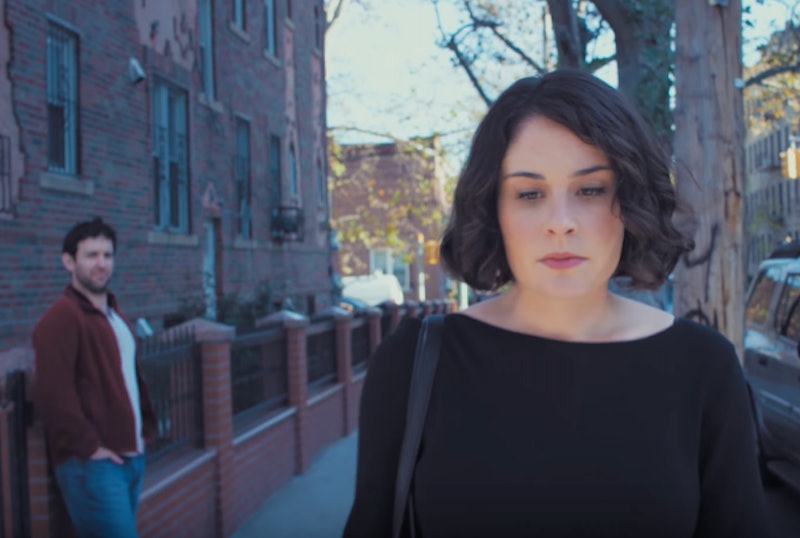 As someone who is a natural-born expert in the art of an at-rest expression that our culture persists in calling Resting B*tch Face, nothing drives me bonkers quite like someone telling me to smile. New York City-based actress, writer, and producer Rebecca Blaine Carton feels the same way — which inspired her to create "Smile," a short film about verbal street harassment in which the main character (played by Carton) explores a few different reactions to a strange man on the street telling her to smile. In less than three minutes, we see Carton have three different responses: One where she's absolutely thrilled, one where she and the intrusive stranger have a real heart-to-heart about what he's said, and one where she kicks his behind. Created in collaboration with HollaBack!, a global movement to end harassment formed by a network of grassroots activists, it nails exactly what the problem is with telling a woman on the street to smile.

Anyone who doesn't have that naturally "cheery" face (whatever that actually means) can relate. I, for instance, constantly look like I'm ready to punch someone. PSA: This is just how my face looks. Odds are I'm in a great mood, which I am, most of the time. I just keep it on the inside. Countless strangers have told me in passing, "Oh, come on. Just smile" — which, oddly, kind of makes me feel like punching someone. What am I, a performing monkey?

But it isn't just people with "Resting B*tch Face" (which, by the way, is a sexist phrase that really, really needs to be retired) who experience these kinds of comments; women from all different backgrounds all over the world have experienced someone telling them that they're at fault if their faces aren't arranged in a way that's meant to be pleasing to others. Yes, in the grand scheme of things, telling a woman to smile is seemingly harmless — but "seemingly" is the key word here, and in an email to Bustle, Carton makes many fine points about why this behavior needs to stop, like, yesterday.

"I've had so many men walk by me on the streets and command me to smile, as if I have been literally put on this Earth to walk by this particular man at this particular time and smile for him just to lighten up his day," she explains. Carton is no stranger to street harassment, having been both yelled at and touched in public: "Nice tits!" "Nice ass!" "I would give my right testicle to..." These are just a few words that have been directed her way. "Smile," therefore, "is an exploration for me of how many different thoughts and opinions and emotions I have surrounding this issue," she says.

I've heard the argument that telling someone to smile has nothing to do with harassment against women, but Carton points out exactly why that's incorrect. "Would you say that to a strange man walking by you in the streets?" she says. "If the answer is no and I'm guessing it is, then stop thinking it's acceptable to say to women."

I can already hear the haters telling us we're too sensitive. To this, I say: I don't like being bossed around, period. I stopped letting my mom dress me when I was three. Do you think I want some rando on the street commanding me to smile because it makes him happy? No. No, I do not. And that rando on the street is not entitled to me in any way — including how I arrange or don't arrange my face.

"For the men who tell women to smile, I'd like to say: STOP," Carton says. Heck. And yes. Check out the full video above.

More like this
How To Fight For Reproductive Rights, Based On How Much Time You Have
By Courtney Young
Sandra Bullock, Girlboss Extraordinaire
By Matt Harkins & Viviana Olen
Meet The Disney Imagineer Bringing 'Guardians Of The Galaxy' To Epcot
By Charlie Mock
8 TikTok Pasta Recipes To Try Out At Home
By Emma Garza
Get Even More From Bustle — Sign Up For The Newsletter