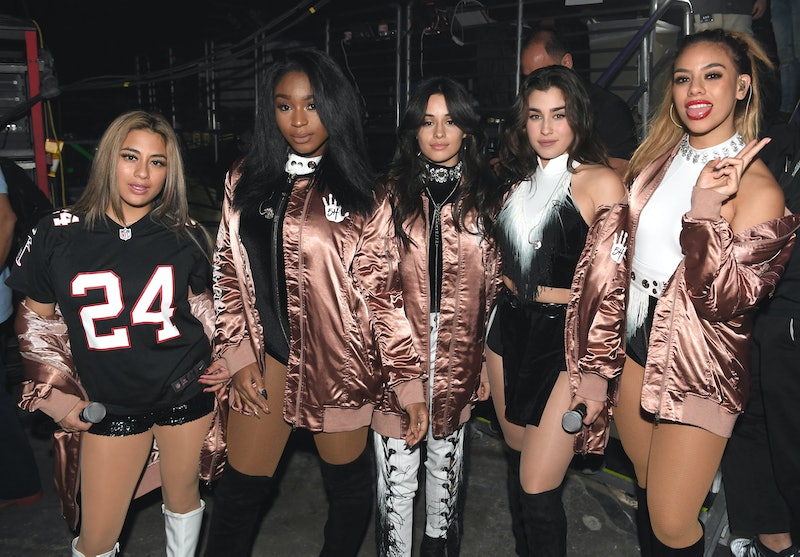 If you're still reeling from the news that Camila Cabello left Fifth Harmony, then the band's latest statement about the split might give you some closure. But, first, let's backtrack. On Sunday, the band announced Cabello's departure. Afterward, Cabello shared her own side of the story. Monday night, Fifth Harmony (or should we call them Fourth Harmony now?) reacted and shared another message with their fans. Their response to Cabello's latest statement aims to clarify some things, as well as put this whole ordeal behind them. "Onward and upward," it closes, which might be the best message to take from all this. Bustle has reached out to Cabello's publicist for comment, but have yet to receive a response.

Here's the gist. Cabello took issue with Fifth Harmony's original statement, which professed that her representatives informed them of her departure, not Cabello herself. In her message, Cabello put that story to rest, claiming that she had multiple conversations with the girls about leaving. She also stated that her intentions were not to "leave this way," which makes it sound like those conversations might have not been amicable, or at least one-sided. But Cabello also included hopefulness and well wishes for the band in her sentiments. At the time, Bustle reached out to the band's representatives for comment, but did not receive a response.

In response, Fifth Harmony has decided to delve a bit deeper into Cabello's words. On Dec. 19, they posted a screed that refutes some of Cabello's declarations. As of right now, they have the last word.

"To our Harmonizers - We know you are hurt and confused, we are too. We know you want answers. And you deserve them, as you are just as much a part of this group as the four of us are," the foursome wrote. "The last thing we want to do is engage in a battle of we said, she said, but we’ve let our story play out in press and on social media for too long. So, to our Harmonizers, who we care so deeply about, we want you to hear everything from us, unedited, not manipulated, just us, to you.”

A large portion of the letter seems to be coming from a place of frustration. Fifth Harmony lists out all the ways they tried to make it work with Cabello. According to them, the group “consistently made every effort to sit down and discuss the future of Fifth Harmony with Cabello." They called for multiple group meetings, but "she refused." They even went to group counseling.

Then, they negate Cabello's previously shared assertions. "After months of rejection from her and her team, these supposed lengthy conversations in fact never happened, although we pleaded," they wrote, adding that "efforts" from both parties "were not mutual."

The letter fades in and out of two things — the band airing grievances and the band trying to remain graceful about the split. See: “We truly support anyone’s decision to do what makes them happy and to that end we do wish Camila all the best, although saddened by the way she and her team handled the situation." And: "To watch Camila walk away from this special world we’ve built with you is tough, but we will move forward together.”

Ultimately, Fifth Harmony wants to put this all behind them. They want to be done "engaging in this back and forth," concluding that even though they "tried time and time again to make this work for the five of us," they intend to keep going as a foursome, with the support of their fans, "the loyal Harmonizers." Finally, they note, "We wish only good things for all. Onward and upward.”

Hopefully, this will be the final statement regarding Cabello's departure, and both parties will be able to move on and be happy with the decision, regardless of how it was made.