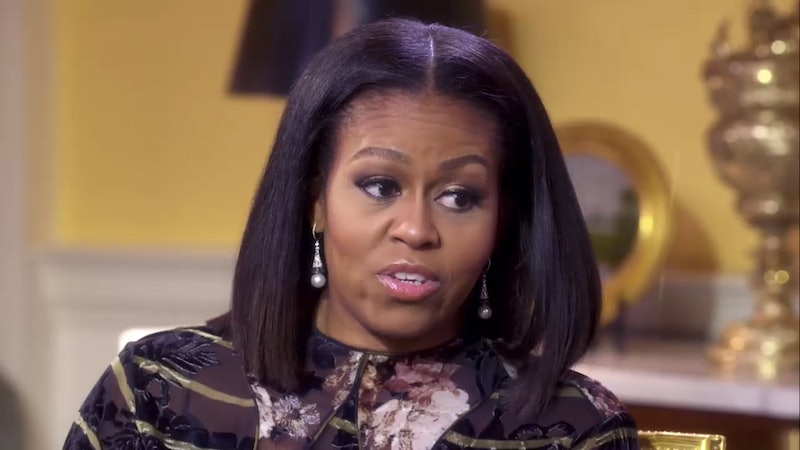 After eight years as first lady, Michelle Obama sat with Oprah for her final interview to be conducted inside the White House. The special was aired by CBS on Monday night and lasted 43 minutes, making it one of Michelle's lengthiest one-on-one interviews to be televised. As we've come to expect, the soon-to-be-former first lady proved herself to be one of the most intelligent, wise, and respectable figures in American politics. If you're a Michelle admirer who didn't manage to catch the original broadcast, you're probably hoping to find another way to see it, and fortunately, there are several options available that don't cost any money.

The Oprah Winfrey Network's YouTube channel has uploaded seven snippets of the full conversation, each ranging between one to three minutes. If you don't have time to watch the entire special, checking out these videos is a good idea. The clips they've shared include some of the interview's most poignant moments, such as Michelle's thoughts on regularly being stereotyped as an "Angry Black Woman," her advice for young girls, her way of coping with negativity, and her belief of the necessity of hope, especially in the country's current climate of division and despair.

Those who want to hear everything Michelle had to share with Oprah should head over to the official CBS website, where the entire interview is available for viewing. You won't have to sign up for a paid account, but you will have to watch commercials periodically. The free CBS All Access app is a convenient alternative if you'd prefer to watch on a phone or tablet. Should the network later choose to put the special behind a paywall, you can sign up for a one-week free trial to gain access — just don't forget to cancel before the trial period ends.

The interview primarily puts the spotlight on Michelle and her experiences, but President Obama made sure to stop by for a few moments to talk about the importance of hope.

Oprah was an outspoken supporter of the president during his 2008 campaign, and she has interviewed the Obamas multiple times throughout their administration. She has specifically had several in depth sitdowns with Michelle over the years.

Though Michelle insists she has no interest in running for office herself, this interview, as well as her many inspirational speeches, will undoubtedly leave countless of us hoping she'll continue spreading her wisdom in the future.

More like this
What Is Barack Obama’s Net Worth? He Makes *Way* More Now As An Ex-President
By Hugh McIntyre
Taylor Swift, Kerry Washington & More Speak Out On Uvalde Mass Shooting
By Jake Viswanath
How To Support Gun Control Reform Right Now
By Morgan Brinlee and Carolyn Steber
10 Times Diana & Meghan Spoke Similarly On The Royal Family
By Sophie McEvoy
Get Even More From Bustle — Sign Up For The Newsletter