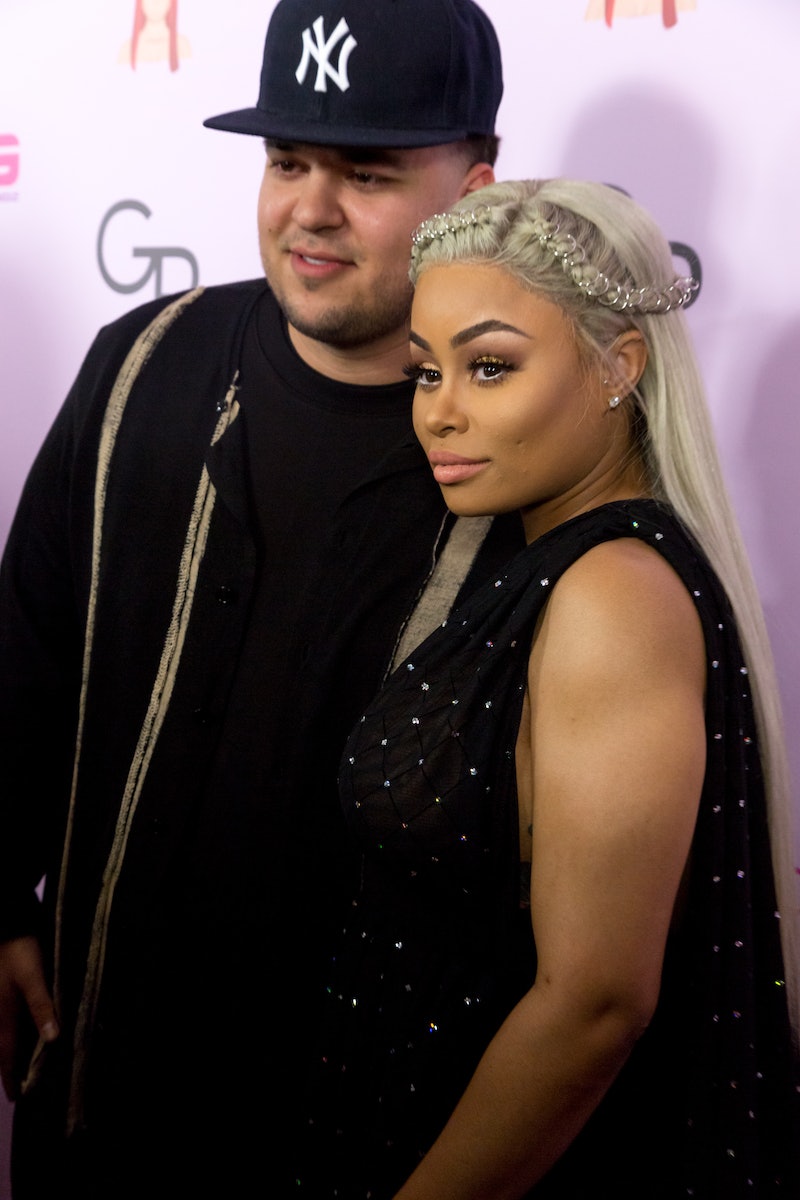 If you're still scratching your head about what seemed like a Rob Kardashian and Blac Chyna breakup last week, now, new alleged details could mean the situation was even worse. According to what a source claiming to be close to the reality couple tell E! Online, Chyna allegedly beat Kardashian before she and their daughter, Dream, left their home. Bustle has reached out to Kardashian and Chyna's reps for comment, but did not receive a response at the time of publication.

As the insider tells the site, before their blowout hit social media, their fight allegedly got physical until Kris Jenner's boyfriend, Corey Gamble, reportedly stepped in and "ripped Chyna off Rob" when he saw them fighting. The source claims that Chyna was allegedly "punching him in his back and arms and was in a drunken rage" before leaving with Dream and her son, King Cairo. Shortly afterward, Chyna's Instagram was littered with alleged text messages from Chyna as Rob shared videos of himself on Snapchat announcing that she had left him. Since then, Kardashian has issued Chyna (and Dream) an apology via Instagram, although it isn't yet clear what the future will be for the couple and their relationship going forward.

The source adds that although their fight seemed massive on social media, Kardashian and Chyna are reportedly still together and everything has already blown over, although they are allegedly still living apart. The source claims:

This argument got a lot of attention, but honestly, this was kind of like a normal tiff for them. They always have these up and downs. Everything is fine between them now. Rob has promised to get some help for self-esteem and jealousy issues. They are both committed to making this work. Ultimately, they both love one another. As for whether they will last, who knows? But they're both going to try.

So far, Chyna and Kardashian have yet to give an update on the state of their relationship themselves, but hopefully, more details are coming soon.

More like this
Kourtney Kardashian & Travis Barker Are Married – Officially
By Sophie McEvoy
Is Megan Fox Pregnant? MGK Gave A Shout-Out To Their “Unborn Child” Onstage
By Hugh McIntyre
Sasha Lane’s Greatest Love Of All Is Her Daughter
By Sophie McEvoy
Kelly Osbourne Found Love In Her Best Friend & Now They're Expecting
By Vivian Iroanya and Rachel Mantock
Get Even More From Bustle — Sign Up For The Newsletter