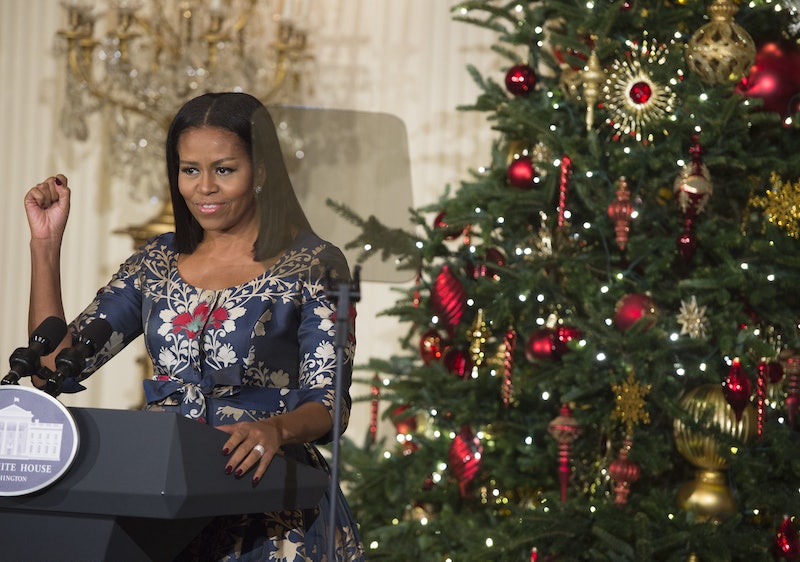 In a new interview with Oprah Winfrey this week, Michelle Obama talked about the harmful effects of stereotypes during her time as first lady, and reminded the whole world how much it's going to miss her come January. Obama's inspiring honesty is a welcome symbol of strength in an especially dark moment for racial and ethnic minorities — one that everyone should keep in mind throughout the next four years.

“That was one of those things where you just sort of think, 'Dang, you don’t even know me,'” Obama said specifically in reference to the "angry black woman" label she labored under as first lady. “That’s the first blowback because you think, ‘That is so not me.’ But then you think, ‘This isn’t about me.’ This is about the person or people who write it, you know? That’s just the truth... I thought, 'Okay, well let me live my life out loud so that people can then see and then judge for themselves.'”

Obama has been the subject of near-constant criticism on everything from her fashion to her physical features to her race (which arguably is the root of all the criticism right there). Yet through it all, she's maintained a cool, focused determination on her policy projects and promoted the causes she believes in, making her one of the most admirable first ladies in this nation's history. None has ever had to face the volume or intensity of vilification that Obama has, and few achieved the grace, poise, and influence that she has, either.

Obama's willingness to talk about the racism she faced is one of the reasons she and her family will make such a lasting cultural difference, particularly for young black men and women. Obama acknowledges the effects of race even in the highest levels of society and gives advice for how to overcome the struggles of reconciling your self-perception with how others see you, which is incredibly powerful representation and guidance for those young people who will grow up to face similar struggles. Even those who won't experience the direct effects of racism have a new perspective through which to view their actions and the society from which they benefit, hopefully opening their eyes to the realities of discrimination and using their privilege to promote equality.

For better or worse, the Obamas' legacy will always be intertwined with their race, and they have handled everything within their control with thoughtfulness and wisdom. They have done an incredible job speaking frankly about how race has affected their time in the White House, giving minorities and allies new platforms to speak about inequality in America.

Though it feels like the nation will be taking a giant step backwards in January, the Obamas have moved the United States forward, and it will keep moving forward even now. The important thing to remember in order to make that happen is that minorities must always have the space and respect to speak about their oppression, or society will be condemned to perpetuate it.