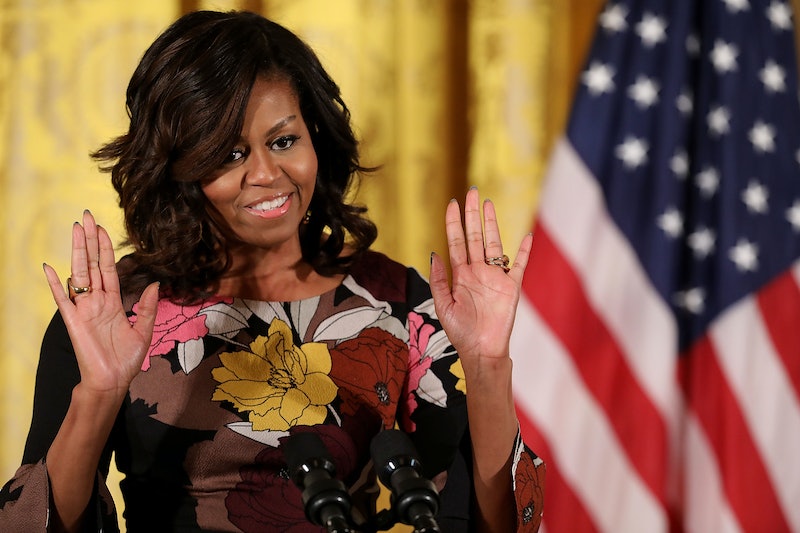 In her final interview as first lady, Michelle Obama sat down with Oprah Winfrey to reflect on the past eight years. In the refreshingly frank and enlightening conversation, talk eventually turned to Obama's potential political future. But even though Obama told Oprah she will not run for president in 2020, the internet will not drop its push to have the first lady back in the White House.

The farewell interview aired on CBS on Monday night. Obama spoke about how the election was painful for her, and the lack of hope the country now feels after Trump's election. But she also said that she and Barack are supportive of Donald Trump's transition team, and that she will help Melania with whatever she needs.

Oprah couldn't help but bring up the rumors swirling around a 2020 presidential run for Obama. Obama was direct and steadfast in her assertion that she will not run for president in the future. “No, no. Look, that’s one thing I don’t do. I don’t make stuff up. I’m not coy. I’m pretty direct. If I was interested, I’d say it," Obama said when asked point blank if she would run for office by Oprah. However, even the first lady's direct answer won't stop the internet from speculating about how great a Obama 2020 run would be.

The calls for Obama to run started after her speech at the Democratic National Convention in July. People have always admired FLOTUS's intelligence and grace. But that speech, in which she said her famous "When they go low, we go high" line, was the catalyst for the calls for her to run for president. And it's only gained steam since Hillary Clinton's loss last month.

Her Supporters Are Pretending They Didn't Hear Her

No mater how many times she says that she will not run, her supporters are not ready to accept a White House without Michelle Obama.

But What If She Can Still Keep Her Passion Projects?

One of Obama's primary focuses as first lady was on health and wellness initiatives. And if Donald Trump doesn't have to give up his favorite projects when he comes into office, namely his executive producer role on Celebrity Apprentice , why should she?

When It Sinks In

When it does eventually sink in that Obama will not return to 1600 Pennsylvania Avenue in 2020, champions of the First Lady will be distraught.

But She's Not Going Away Forever

We need to move on from the idea that Obama will run for president, but she will undoubtedly remain on the national scene. And we may even have the road trip adventures of Obama and Oprah to look forward to.