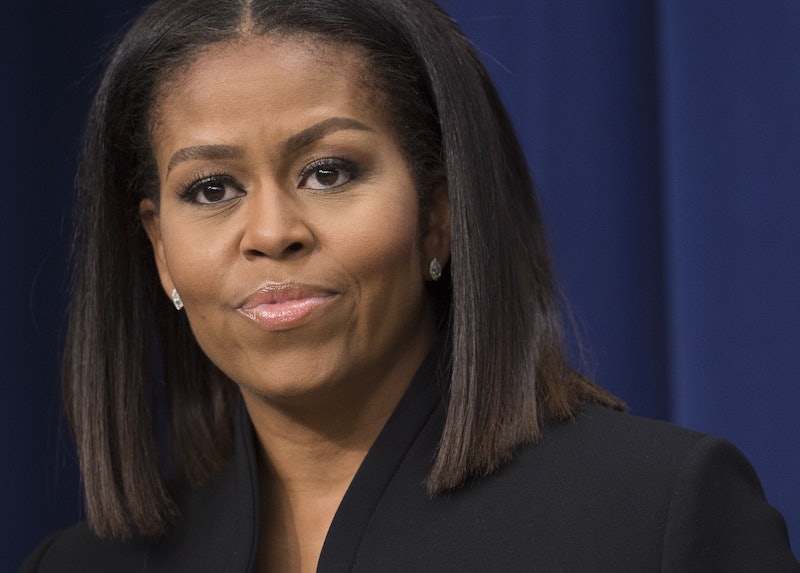 The subject of race was a big part of Michelle Obama's last one-on-one interview in the White House, both in content and context. Oprah Winfrey conducted the historic interview with the first lady to discuss her legacy, her sacrifices, and her experience with racism, and it felt even more historic because of both women's races. Two of the most influential black women in America talking to each other frankly about race is a powerful symbol of hope for black women in the next four years, and they're definitely going to need it.

Obama and Winfrey are two of the most successful black women in America, so their conversation about the effects of racism had a special veracity and wisdom. "This is a defense mechanism that I've had throughout my life. You know, the bad stuff, I just don't hold on to," Obama told Winfrey about how she dealt with negativity as first lady. "I think we as women do it, we as black women better be able to do it, because there's so much that comes at us all the time and every day, in subtle ways that could tear your soul apart if you let it. But my mother always taught me: Girl, you'd better keep it moving, you know, you'd better brush it off."

Obama and Winfrey also have similar backgrounds that create a shared history, giving further strength to their interview together. Both women have powerfully and publicly talked about their enslaved ancestors, citing them as part of their motivation to achieve. They also both grew up with in underprivileged communities, but managed to fight their way out, gain an exceptional education, and become leaders of their respective fields. Seeing these two incredible women's shared experiences openly discussed on national television is an amazing symbol of the respect and agency that all black women deserve.

In this current cultural moment, when blackness is being brutally demeaned and the war on women is gaining momentum, two successful, famous black women sharing their thoughts and perspectives is so necessary. Obama and Winfrey have already given millions of women of all colors the hope and strength to work harder, but this symbol for black women is a sign that they, specifically, can achieve anything. Black women will have a lot to deal with throughout Donald Trump's now inevitable presidency, but Obama and Winfrey are two amazing reminders that black women are strong and worthy, even when the world tries to convince them otherwise.