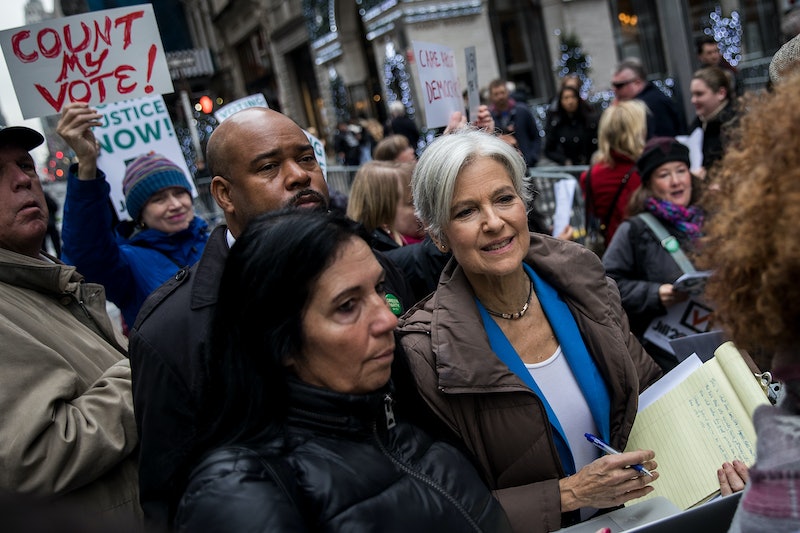 While Donald Trump's Electoral College victory on Monday cemented his presidency, it wasn't always a clear path, especially when Green Party candidate Jill Stein launched recounts in three states to challenge Trump's win. The recounts ultimately did not change anything, and there was a lot of discussion during and after as to whether the recounts were worth it. I had been of the opinion that they were, but now... I'm not so sure.

Looking back on the weeks following Election Day, it's not a stretch to say that many of us were in a state of shock. So on Thanksgiving weekend, there was a sudden glimmer of hope as Stein launched her recount effort — maybe it was all a bad dream! Our hope translated into cold hard cash, as Stein raised over $7 million to support the recounts. There was a lot of talk in the media about whether the recounts were fair or folly. I argued that it was an important part of the process, while others said it was a waste of time and money.

But then I saw a tweet from Sean McElwee, a research associate at New York-based liberal think tank Demos, which turned me around.

On a sheer numbers level, McElwee's observation is staggering. According to his calculation, the $7.3 million Stein raised could have paid for 137 state legislator races, and made a serious impact on electing progressive candidates to statehouses across the country. It seems to be finally sinking into the wider collective consciousness that, as unsexy as it may be, state-level politics is where some of the most important governing happens. And if we're going to see the end of the Electoral College, it will most likely happen at the hand of state lawmakers.

The Jacobin piece by Sean Ackerman that McElwee pulls his stats from advocates for moving past the party system altogether. While I think sounds nice, I'm uncertain that what Ackerman is proposing won't itself just turn into a political party. But the important takeaway is that local-level politicians win and lose on modest amounts of cash, especially when compared with their federal counterparts. If Stein can raise substantial cash in just a few days to support a long-shot recount, shouldn't Democrats be able to generate enough to win over some state legislatures?

As always, the answer is not as simple as the question makes it out to be, but I think that part of the problem is motivation: there was intense motivation to try and undo the Nov. 8 result that helped Stein's efforts. We need to feel similarly motivated to support local liberal legislators in their campaigns as well. Because if liberal ideas can't get a foothold on the local and state level, we're going to have a much harder time regaining power at the federal level.