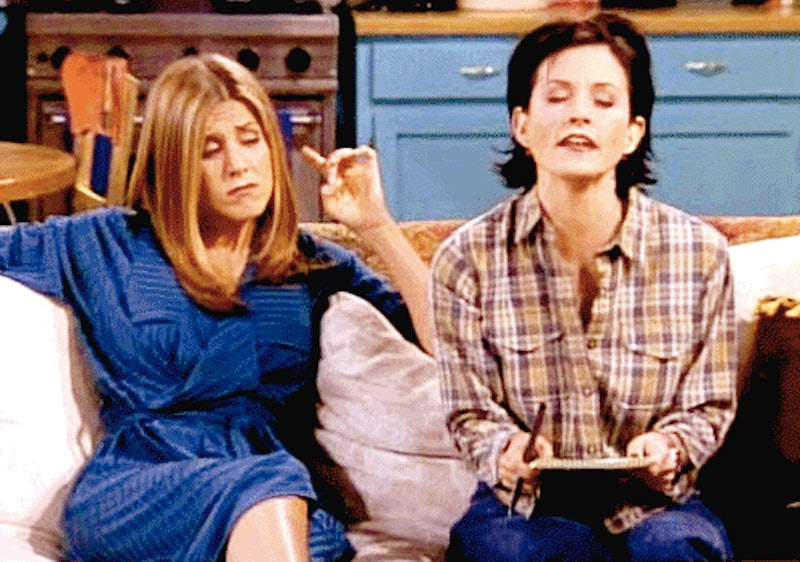 We think we've got feminism on lock right now, but the '90s were pretty damn inspiring too, and the following feminist sayings from the '90s should prove that. Digital feminism is in full swing, with the internet giving voice to this (fourth?) wave of feminist expression — but even without the hundreds of amazing feminist websites promoting women's voices, fierce women were still making themselves heard. And not only were they heard, we were repeating their words in our every day lives and adopting them as our own '90s feminist catchphrases. In my humble opinion, it's high time we revived some of these too.

From Riot Grrrl feminism to the more girly-girl but no less important dictum of Cher Horowitz, the '90s are a treasure trove of feminist wisdom. Whether it's rejecting mansplaining with a few simple words, standing up for yourself as a woman or just having your voice heard despite the blaring patriarchy, the '90s had feminism covered. And the feminist awakening started early back then. Some of your favorite '90s feminist quotes came from some pretty tiny ladies, from teens to tots. Here are 12 awesome feminist sayings from the '90s, because you can never really get too much feminism for your girl power arsenal.

Probably the most instantly recognizable saying from the '90s, which was made super famous by the Spice Girls, who were basically girl power personified.

The most glorious exclamation for pushing off anyone or anything that isn't good enough for your time. Often for Cher it was the advances of an lecherous male. Two simple words when put together say, "Are you kidding me with your bullsh*t right now?"

Also made famous by Clueless but generally ubiquitous in the '90s, "Whatever" was a saying for girls who just did not care to be party to anything society would foist upon them. It was about showing indifference to the things you were told you were supposed to care about.

TLC sang it, and the rest of us adopted it as a catchphrase for rejecting f***boys — only back then, we called them scrubs.

For young girls in the '90s, Stephanie Tanner made it OK to have an opinion, and to voice it. As a little girl I'd often tell people "How rude!" when they'd acted poorly towards me. I guess now that's why some would describe me as "demanding" or "opinionated". I'm sure the same goes for a whole battalion of '90s feminists.

6. Anything To Do With The "Seven Basic Erogenous Zones"

Seven was every feminist's magic number in the '90s. It's the number Monica used to school Chandler on female erogenous zones in Friends, and the moment we all realized male desire could sod off, we were going to get ours.

7. "I’m The Thing That Monsters Have Nightmares About"

Buffy was the quippiest vampire slayer ever to quip, and she gave us some favorite feminist sayings in the '90s. It was the kind of speech that made us all wish vampires were real, so that we could go out and slay too. See also: "The Hardest Thing In This World Is To Live In It".

For every girl that felt like she wasn't a cookie cutter of what patriarchal norms said she should be, this quote from The Craft was an essential '90s feminist saying.

I mean, we were a little immature (if we were kids) in the '90s, so we'd say this a lot through giggles. But as silly as we could be, having a catchphrase so brazen thanks to Salt N Pepa was also empowering. Women talking about sex? Even now that's something of a taboo.

An icon for smart girls in the '90s, Hermoine Granger's correction, it's "LeviOsa, not LeviosAR," is something we all quip from time to time when someone is mansplaining to us. '90s girls get it.

This was a big part of trash TV culture, but it also meant "Stop mansplaining to me" before mansplaining was even a word. It was also useful when anyone was employing any kind of latent or aggressive sexism. I vote we bring this one back. I'd love to tell a lot of people to talk to my hand, 'cause the face certainly don't want to hear it.

12. "I Guess In Our Society Being Male And An Asshole Makes You Worthy Of Our Time"

10 Things I Hate About You's surly Kat had a wonderful point that is just as relevant (or maybe even more relevant in Trump's America) today as it was in the '90s. Kat taught us about the pitfalls of patriarchal privilege, and her quote became one of the '90s' most iconic feminist sayings.

More like this
Remember These Ancient Pieces Of '90s Tech?
By Lucia Peters and Emma Carey
11 Trends From The ‘90s That Made You Feel So Cool
By Julie Sprankles
Starbucks’ Chocolate Cream Cold Brew Tastes Like This Retro Candy
By Emma Garza
Is TikTok’s “Villain Era” Trend Just An Excuse For Bad Behaviour?
By Chanté Joseph
Get Even More From Bustle — Sign Up For The Newsletter