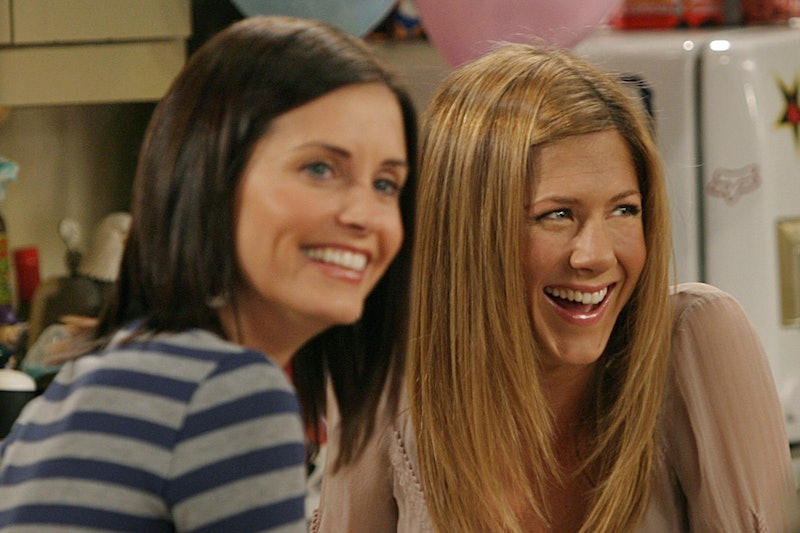 Everyone had a favorite pair of BFFs in the '90s, and you can tell a lot about a person from the couple they chose. I was all about Friends, which I suppose makes me a little bit of loser, but really sentimental and loyal (but more on that later). Friendships in the '90s, as always, came in all shapes and sizes. The '90s were special because between Sex and the City and the Spice Girls, every friend in every group was trying to pick a persona for themselves. You often adapted your friendship circle to fit pop culture's prescribed ones, always knowing that you were all secretly far more dynamic than the characters you related yourselves to, but believing that in relating yourself to them, your real life friendships were steadfast. Ah, to be an innocent '90s kid again!

From Cher and Dionne to Daria and Jane, there was a pair of friends to suit every kind of '90s friendship. Whether your favorite activity was going to the mall and shopping together or going to the mall and sneering at people from a corner in the food court, you and your BFF could find your doppelgängers in popular culture. Here's what your favorite pair of '90s BFFs says about you.

You and your bestie were Fun (yes, with a capital "F"). You're a decisive person, and you choose your friends based on their loyalty and good-heartedness, and because of that you wind up with lifelong pals. You're a natural leader, and also don't shy away from being honest with the people you love.

You're a goofball, and generally pretty uncool (which weirdly makes you cool). You appreciate a good sense of humor in your friends and love people regardless of how annoying other people might find them. You're always able to look past the superficial stuff and know who is really there for you.

You seem pretty together from the outside, but underneath you're just as neurotic as anyone, and you've got unimaginable quirks that people who don't know you wouldn't believe. You don't stop at one BFF and probably have two or three (or five!), and the friends you keep are like family to you, maybe even more so than your actual family.

You don't have a lot of friends. You don't need them. Plus, most people are stupid anyway. You're a true cynic, and genuinely don't care what other people think of you.

You like to party, and are loud, bold, and totally unafraid of your body or sexuality. You're always looking for a good time, and love your bestie with an awesome ferocity. You're really into holding hands and hugs too, and always have the best lipstick.

Friendship is so valuable for you, you're the kind of person that's dating/married to your best friend. You're pragmatic, and have learned to be an open communicator because of your deep friendships, both platonic and in relationships.

You believe in the power of platonic love. You're able to be best friends with members of the sex you're attracted to, and can move past literally anything with someone you love. You're sentimental, and grow so close to the people you love you basically speak your own language with them.

You're a "cool girl", but also a little bit duplicitous. You might have good friends, but you're also no stranger to the frenemy. You're sweet, fun, and giggly, but you also hide a judgmental, harsher side as well.

You're terrifying. An overachiever in every way, you're also super glamorous and always on top of your game. On the rare occasion that you're caught having an off day, you don't even care; you're such a Queen on an every day basis that a little slip doesn't shake you.

Your family is your best friend. Whether it's a cousin, parent, or sibling (or all of them!), family comes first. You've got strong values, try to be ethical at all times, and have unstoppable confidence. You know who's got your back, and as a result, you're fearless about facing the world.

You're adorable, and have a real taste for nostalgia. You keep friends for life, rarely adding new ones. That's not to say you'e not up for adventure: you're always trying something new, whether it's baking or hiking, and doing it surrounded by the laughter of your loved ones because you believe life is sweeter when it's shared.