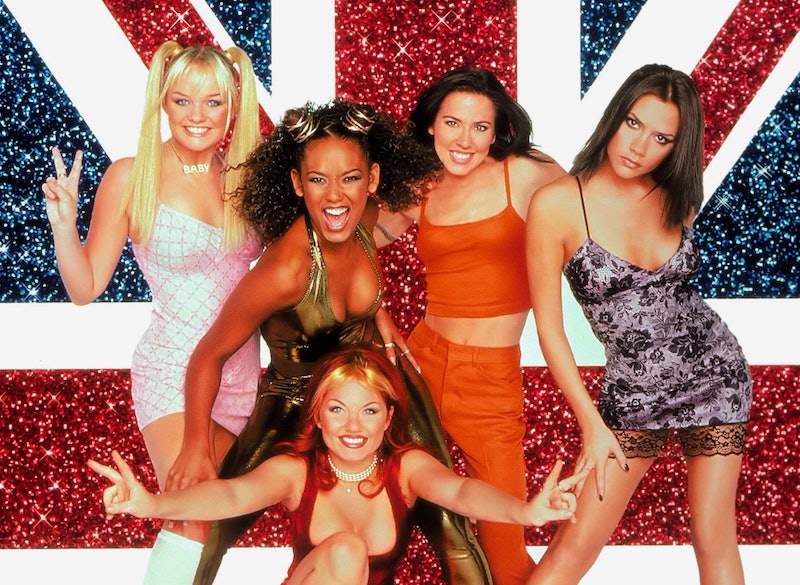 Unless you had one rough childhood, in the ‘90s, you had a BFF. She was your right-hand lady. Your sidekick. She was always there for you: When you’d eaten a popsicle too quickly and feared your brain would never function the same way again, when the new Spice Girls album was sold out at Tower records, and when the only thing on TV was Salute Your Shorts .

See, in the ‘90s, we didn’t really have much in the way of Internet. We didn’t have text messaging, Gchat, Instagram, or Facebook. We just had our home phone numbers — and man did we use them (secret three-way dial to your crush much?). Since our best friends were only a phone call away, we still felt connected. We discussed growing up and living in houses right next door to each other, and how things would never change, never ever.

Unfortunately, sometimes things do change. Some of us grew apart. Some of us physically moved across the country. But that doesn’t mean we shouldn’t wax nostalgic and honor our old childhood friendships. After all, the ‘90s were filled with forms of caffeine which are now banned or discontinued, a Blockbuster on every corner, and enough imagination and enthusiasm to make anything and everything absolutely epic. So let’s take some time to give our old ‘90s BFF some love.

The perfect summer day with you was spent together, jumping through old-fashioned sprinklers...

Forget Slip 'n Slide. You could spend hours jumping through the fountain your sprinkler made. How many times could you jump through the water before it touched the ground?

...then splitting one of those double popsicles with two sticks

These are so awkward to eat by yourself, I'm not really sure what the creator was thinking. Like, if you want two popsicles, just eat them separately. But whatever. When you had a BFF to share these with, this silly problem was solved.

Spending hours coloring in Disney princesses with crayons was an unbearably good time...

I guess coloring was for "little kids," but you didn't care at all. Instead, you guys whipped out the 96 Crayola Crayon pack (sharpener included!) and got your inner-artist on. Cinderella usually ended up with purple hair, and Snow White definitely wore a silver-neon dress like a true fashionista.

...and diplomats could have learned from our lip smacker trade negotiations

We all had vanilla and strawberry, but sometimes one of you would end up with a rare scent, like "Amethyst Sour Grape," and that's when shit got complicated.

We had to ask our parents to take us to Blockbuster so we could pick out a movie...

Once you two were dropped off at Blockbuster, the possibilities were endless. You could browse through the "family" section and pick out a classic, like Homeward Bound. Or you could sneak a raunchy movie, like Night at the Roxbury and hope your parents wouldn't notice.

...Oh, and we definitely bought those sour watermelon candy tubes while we were there

Because those were the best.

We walked to the nearest gas station to buy watermelon Laffy Taffy and Surge...

The important part was that you had sugar. A lot of sugar.

...and we traded Pokemon cards, but gave up because it made no sense

An integral part of the Pokemon card game was using your energy cards, but what did those mean, anyway? Mostly, we just sat around and marveled at your beautiful, holographic Charizards and Mews.

We collected Wet ‘n Wild nail polishes and gave each other manicures...

Thanks to countless birthday parties and goody bags, you each had more nail polish than a nail salon. This made it difficult to choose colors, so we just used them all. Rainbow fingers!

... and then pretended to be the Spice Girls while choreographing dances

Baby Spice was the most coveted position, but if you were nice, you let your bestie be her for this round of "Wannabe" while you twirled your bangs into Scary Spice's signature 'do.

You were the first one there at my birthday party

Of course, it was always (and still is!) nerve-racking being the Birthday Girl, so having your BFF there for you before anyone showed up was very, very crucial.

Using an apple, an ice-cube, and your mom’s threading needle, you tried to pierce my ears.

Your parents were going to absolutely kill you, but it was whatever. Plus, LiLo didn't even make it look THAT bad in The Parent Trap.

Making jewelry from those bead kits you’d get for your birthday was the most fun, ever...

Every. Single. Birthday. You ended up with a pile of these bead kits that was so ridiculously huge that your mom insisted on re-gifting. But with the kits you did keep, you had an A+ time making friendship necklaces and ghetto earrings.

... and we made some damn fine art out of Perler Beads

We had an entire tub of these vibrant mini beads, and could spend hours creating the perfect owl, Hello Kitty, or star. Yeah, you needed wax paper and your mom or dad so they could iron the beads until they slightly melted, but the end result was priceless! (Until they took over your room and you had to throw them out.)

we read those Scary Stories and freaked ourselves out at sleepovers...

Those scribbly pictures of corpses and rotting houses were scarier than Goosebumps and Are You Afraid of the Dark? combined. But we read them aloud anyway.

...and we definitely tried to summon ghosts and spirits with your Ouija board

Even if you suspected I was moving the part around to spell out "BEWARE," you still got the chills. Was that a flickering candle? Did you just see the door move? OHMYGOD.

remember how we watched Titanic and giggled at the sex scene?

Somehow, we got ahold of the VHS tape, and we watched all the way through, even the boring parts, JUST so that we could watch Jack and Rose do it.

and how we flipped through The Care and Keeping of You and freaked out about tampons?

Shaving tips, checking for breast cancer, and more terrifying changes our bodies would go through kept us up at night. At least we had each other.

yes, you were always the best person to switch snacks with at lunch...

I know my mom packed the exact same thing week after week, so it was a refreshing change to try out someone else's mom's culinary creation.

...and though we wished we were already grown-up, man, were we wrong

Yeah, you wished you had boobs, or that you were allowed to wear lipstick, drive a car, or at the very least go to the movies by yourself. But ultimately, you liked being a kid. It was especially fun with you as my BFF.

at least our pinky-swear sealed the deal: once a BFF, always a BFF

More like this
8 Creepy Things You Probably Did In The '90s
By Julie Sprankles
11 Trends From The ‘90s That Made You Feel So Cool
By Julie Sprankles
Remember These Ancient Pieces Of '90s Tech?
By Lucia Peters and Emma Carey
Starbucks’ Chocolate Cream Cold Brew Tastes Like This Retro Candy
By Emma Garza
Get Even More From Bustle — Sign Up For The Newsletter