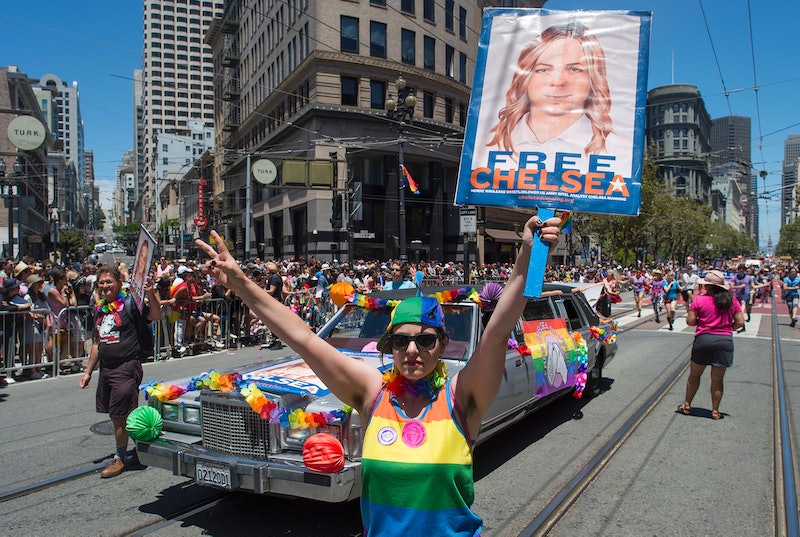 On Tuesday, in the waning days of his time in the White House, President Obama signed an order commuting the sentence of Chelsea Manning, the army whistleblower. In 2013, Manning was sentenced to 21-to-45 years in prison by court-martial for passing a trove of classified documents to Wikileaks, but with Obama's action, she will be released in May of this year. Manning has remained a lightning rod for political discourse both because of the acts she committed, and the ways the U.S. officials have handled her and her gender identity while she has been in custody.

On social media, trans people have been celebrating the news that Manning will be released in just a few months. Last year, Manning tried to take her own life on two separate occasions. In a press release after Manning first attempt at suicide, her attorney Chase Strangio referred to Manning as "suffering the darkest depression she has experienced since her arrest," and cited "Chelsea's distress associated with the denial of medical care related to her gender transition." By commuting Manning's sentence, it's certainly possible that President Obama has saved her life.

I've followed Manning's case closely since it first made the news. While Manning did not come out publicly as transgender until after her sentencing, the fact that she had struggled extensively with her gender identity came to light during her hearings in 2011. At that point, I was in the process of coming out as a trans and starting the first steps of transition, and I felt a certain kind of kinship with her. One of the things that always struck me about her case is how easily I could be been exactly in her shoes. I spent most of my twenties struggling to understand and accept who I am, living in fear of sharing my authentic self, feeling trapped in a life that did not feel like my own. Being able to live as who I truly am has done wonders for my emotional well-being, and access to hormone therapy has been literally life-saving for me.

The fact is, I could have just as easily ended up in Manning's situation, in a miserable environment, involved in a war I morally objected to, and feeling pretty damn powerless and stuck.

While we have had some gains in the social acceptance of trans people in recent years, stigma and internalized transphobia is still a tremendous barrier for trans people living authentic lives. Many trans women attempt to cope with our discomfort with our assigned sex and gender by pursuing stereotypically masculine careers, hoping it will "fix us." For some that means the joining the military, as it did for Manning. For others it's law enforcement, firefighting, or in my case, crewing a tugboat. But the fact is, I could have just as easily ended up in Manning's situation, in a miserable environment, involved in a war I morally objected to, and feeling pretty damn powerless and stuck. I can't say that if I had seen the kinds of things that she did during her service that I wouldn't have done the same thing she did.

While it's exciting to see that Manning will soon walk free, her ordeal serves to highlight the significant problems that still exist with trans women and the criminal justice system in the U.S. It's been horrifying to watch how Manning has struggled to access (medically necessary) hormone replacement therapy even after court orders, to present herself in a way that she feels comfortable, to be addressed by the correct name and pronouns, and to survive as a woman stuck inside a men's prison. It's a struggle that nearly all trans women who find themselves in the criminal justice system share: Prisons often deny trans women access to medically-necessary hormone therapy. We are most often housed with men, where we face harassment, assault, and rape from prison officials and inmates alike. Far too often, we don't make it out alive.

For most trans women, I'd dare say that being locked up in a men's prison ranks among our worst nightmares. Suicide is also a major risk for huge swaths of the trans community, and reporting on Manning's suicide attempts, her deteriorating mental health, and the government's attempts to punish for them made me seriously concerned that she would not survive until she is eligible for parole.

As we inch ever closer to the beginning of the Trump administration, seeing Manning go free may be one of the very last victories trans people see at a federal level, which may also be why we've been so eager to celebrate it.

Since President-Elect Donald Trump's election, trans people have been scrambling to update our passports and other federal documents before Trump has the opportunity to rescind the executive actions from President Obama that significantly simplified those processes. We've already seen hostility to trans rights from nearly all of Trump cabinet appointments. At the end of 2016, a federal judge blocked the provision of the Affordable Care Act that protected trans people from healthcare discrimination, and a full-scale repeal of that law as proposed by the GOP would almost certainly eliminate that protection entirely. Empowered by the rising anti-transgender sentiment from the Right, we are seeing a new wave of pro-discrimination bills being introduced in states across the country that would deeply erode what little safety and protection trans folks have managed to scrape together in the last few years.

Unfortunately, while we can celebrate that Manning will soon finally escape the torment that she has been subjected to, we must keep in mind that there's still so much more work to do. We also must continue to remind ourselves that so many more trans women, especially black trans women, remain incarcerated and lack the devoted legal team and public outcry that helped to get Manning's sentence commuted. We must fight just as hard for them to have access to transition-related care, to ensure that they are not housed with men. We also must continue to push back against the systemic racism and transmisogyny that creates monumental barriers for trans women of color to obtain even basic levels of economic stability that puts them in those jails and prisons in the first place.

The degree to which race is important here cannot be overstated. Manning undertook a hunger strike to force prison officials to provide her with gender-affirming surgery, and was successful after just five days. Meanwhile, Athena Cadence, a trans woman of color, did not eat for 64 days in protest of housing policies in San Francisco jails to very little effect. Black trans women are incarcerated at absurdly high rates and face levels of violence in jails and prisons that stretch well beyond unacceptable. Trans women held in immigration detention— who are overwhelmingly latinx — have similarly terrifying risks for sexual assault and violence from the men they are far-too-often housed with. Manning's experiences during her incarceration are absolutely unacceptable, but they are emblematic of the problems trans people face in our punitive criminal justice system built on deeply harmful, inaccurate conceptions of sex and gender.

As someone who saw so much of myself in Manning, I will be elated on May 17 when she steps out of the military prison, a free woman. I will cheer for her — but I will also continue to fight for the rights of the thousands of other trans women in custody who face tremendous violence and discrimination, simply for wanting to be themselves. This fight is far from over.