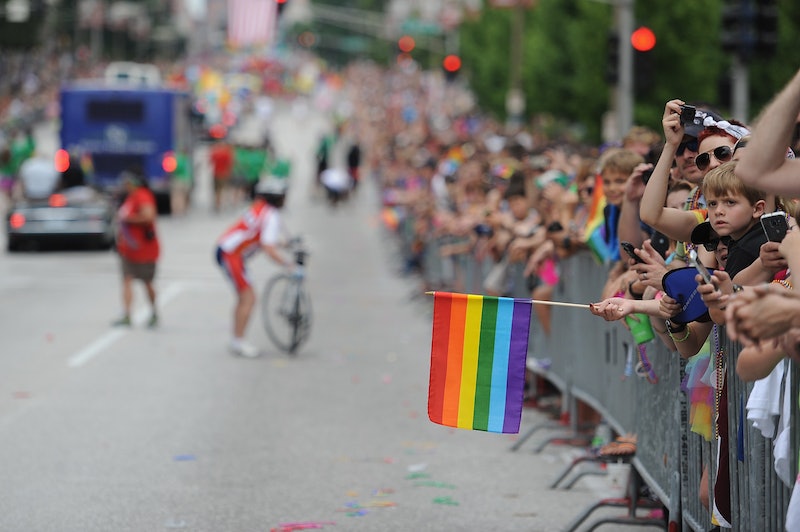 The Supreme Court made history on Friday when SCOTUS ruled in favor of marriage equality, but the fight for equality is far from over. For many people, marriage equality is seen as the pinnacle of their involvement in LGBTQ advocacy, but LGBTQ folks are disproportionately impacted by homelessness, poverty, imprisonment, and immigration policies, as undocumented transgender activist Jennicet Gutiérrez explained in the aftermath of President Obama's pride reception last week. When it comes to imprisonment in particular, LGBTQ individuals — especially those of color — are much more likely to be unfairly imprisoned and then face higher rates of abuse, with limited access to resources, while in prison.

Marriage equality is an important stride in the battle for equality, but as trans South Asian artist collaboration Darkmatter explained, it can also mask the increasing violence against queer and trans people of color and be used as a pinkwashing mechanism to make the U.S. seem more LGBTQ-friendly than it actually is. It is important and valuable that people are able to love who they want to and not be criminalized for it, but it is also important that people are allowed to exist without being criminalized for it.

Prisons, as the National Center for Transgender Equality states, are "an LGBT issue," because LGBTQ folks are subject to disproportionately high rates of incarceration and also face a lot more abuse and humiliation when they are behind bars. According to the National Transgender Discrimination Survey, 16 percent of transgender adults have been in a prison or jail for any reason, compared to 2.7 percent of all adults who have ever been in prison. Additionally, one study found that even though 4 to 8 percent of youth identify as LGBT, as many as 13 to 15 percent of youth in juvenile detention are LGBT.

A federal survey found that individuals in prison who identified as "non-heterosexual" were three times more likely to report sexual abuse, and a study of California prisons revealed that trans women in men's prisons were 13 times more likely to be sexually abused than other prisoners. The numbers, while hard to find, are out there, and they demonstrate that marriage is certainly not the only issue we should be advocating for.

It is hypocritical to celebrate the triumph of marriage equality and at the same time dismiss Gutiérrez as a heckler. It is hypocritical to claim that "love wins" when transgender people are still denied access to hormones, misgendered, and abused behind bars. But there are many activists who continue to do the challenging work of applying intersectionality to the LGBTQ movement, and slowly but surely, progress is being made. U.S. immigration officials released a guide for interacting with transgender immigrants Monday morning, and one crucial point it made was that trans women may now be held in women's detention facilities.

The fight for racial, gender, economic, and other forms of equality does not begin and end with marriage, but rather with the understanding that certain people currently have more privilege and power than other people, and we must work to dismantle oppressive structures — like prisons — before we can declare victory.