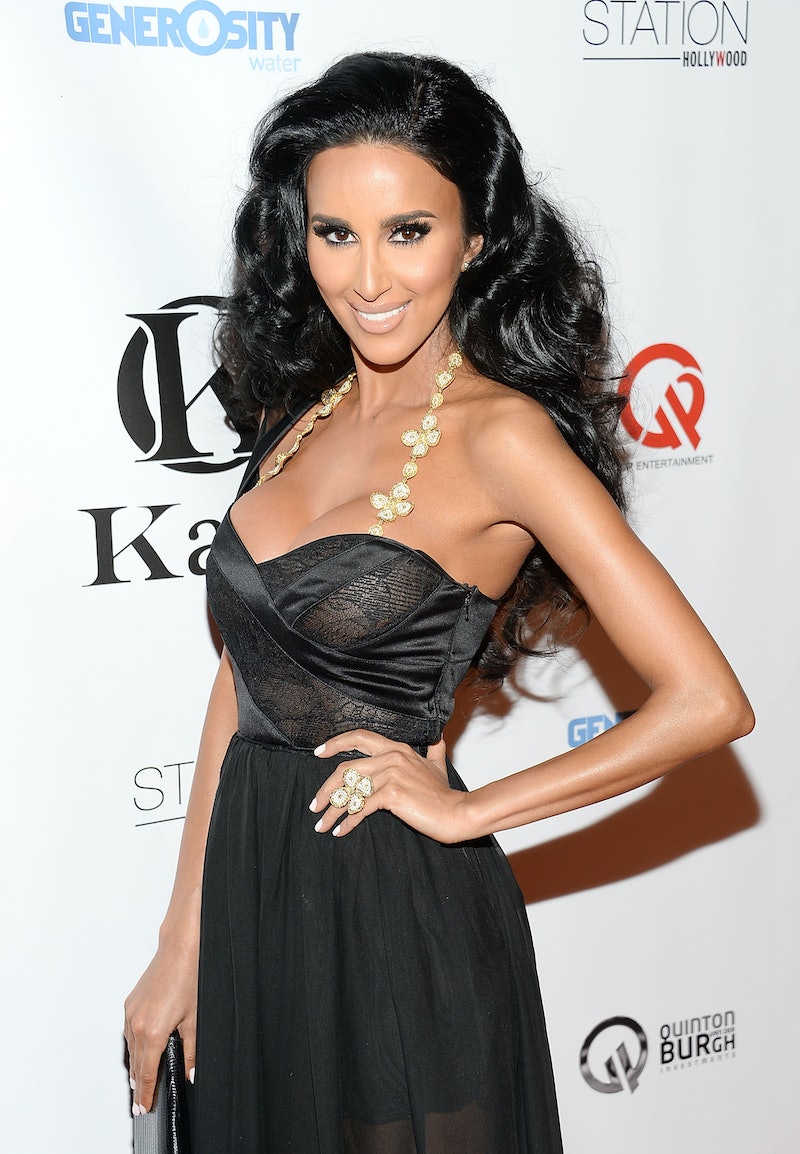 If you've haven't seen Shahs of Sunset, I suggest putting it on when you're feeling lazy. It will really jump-start your motivation. After five minutes of this cast yelling at each other, you won't be able to take it anymore and you'll be in your gym shoes and headed out for a jog. Even with how unbearable I (and everyone else..?) find this show, it's still possible to feel some happiness for Shahs of Sunset star Lilly Ghalichi who just got engaged. Love is great for everyone! Even those who contribute to my urge to throw a shoe at my cable box.

Ghalichi announced that she was engaged on April Fools' Day as part of an elaborate joke started by her fiancé, entrepreneur Dhar Mann. Except the engagement wasn't part of the joke because they'd already gotten engaged two weeks earlier. It's confusing. I'll let Ghalichi explain,

My boyfriend, Dhar, actually proposed to me two weeks ago when we were on vacation in the Maldives. He rented this tiny island for us to have dinner at. There was a chef and a waiter and the only thing on this island is a little table for two. It was super romantic. He proposed to me there, but he didn't have a ring. I was like, 'Then it doesn't count. I want a ring.'

Ah! The classic, "You're love isn't real unless you give me expensive jewelry" excuse. Ghalichi goes on to say that she and Mann didn't tell anyone about the "engagement" until Mann suggested that they announce it on Instagram on April Fools' Day as a way to mess with people even though they actually were engaged. Sort of.

We posted our 'engagement' news with an old photo of me wearing this diamond ring I had borrowed while doing press in New York City a few months ago. It's a 12-carat ring I wore on Watch What Happens Live and Wendy Williams and it's just stunning. It was valued at around $750,000 and I had to have two bodyguards with me when I wore it.

With about two minutes left on Apr. 1, Dhar gets down on one knee and proposes again in his apartment. I'm laughing but he was like, 'No, I mean it. And this time, I got you the ring you wanted.'

Mann got the borrowed, super-expensive ring recreated by the same jeweler, but did not have it at this engagement either. "It's supposed to arrive Tuesday or Wednesday," she says. "So what started out as an engagement joke turned into a real engagement. It's confusing, I know!"

Not only that, Ghalichi is not sure if she even wants the ring. "The only thing is, now I'm not sure that's the ring I want! It's so big — where am I going to wear something like that? After it arrives, I have seven days to decide if I want to keep it."

Dude, just keep the ring. You had two engagements, the first of which you basically said didn't count because there was no ring, then you "faked" your engagement using a picture of a giant ring that you borrowed and obviously liked, then you got proposed to again with no ring again, and now that you actually can have the big ring, you're not sure." Just keep the ring. It doesn't have to be this hard.

I mean... Congrats! Yay for weddings and love and giant rings!