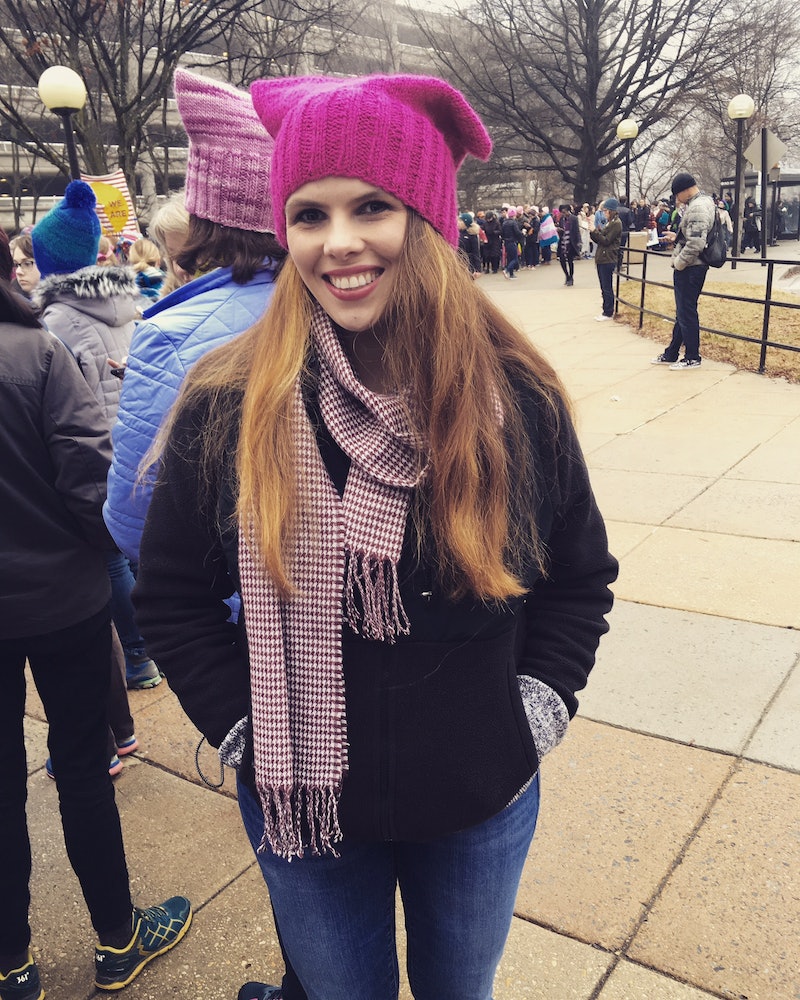 On “A Day Without A Woman” I wore red and marched into to my office at Phoenix House, a nonprofit organization that helps people recover from drug and alcohol addiction. I could have taken a paid vacation day without risk of being fired, but since Donald Trump was elected President, I’ve found myself working much harder in a field that was already pretty tough to begin with. Taking the day off to strike would put me one day behind in my goal of changing the way people think about mental health and substance abuse.

Unlike the Women’s March in D.C., which I proudly attended, I don't believe the International Women’s Strike represented me or was respectful of the work I do. I am far from alone. There are millions of women who work in health care, education, and social services who are already focused on helping women and other marginalized populations every day. If we strike, it will only hurt more women (and men and children) who will have to wait another day to get health care and other social services.

The “A Day Without a Woman” backlash, which began almost immediately, was mostly about how the day was really for privileged women. The organizers wisely recognized that some women couldn’t afford to lose a day of pay or would be fired if they participated in the strike. They accounted for women who aren’t financially compensated for their work by encouraging them to refrain from unpaid work (though hopefully not caregiving, the most laborious of all.) It is indeed a privilege to take a day off, paid or unpaid, but many women whose work contributes towards the greater good couldn’t do that without hurting the populations they serve.

What would a day without women like us really be like? I don’t think America can afford it — even for one day. And, perhaps the very point of the strike was to call attention to that fact. But I was not willing to strike if it meant disadvantaging the people I serve.

Women are vastly overrepresented in helping professions, education, health care, and social work. “A Day Without A Women” is a school without teachers, a hospital without nurses, and a city without social workers. What would a day without women like us really be like? I don’t think America can afford it — even for one day. And, perhaps the very point of the strike was to call attention to that fact. But I was not personally willing to strike if it meant disadvantaging the people I serve.

It’s great that Americans are recognizing the value of organizations that serve and protect vulnerable populations. Since the election, Planned Parenthood has received an unprecedented number of donations and ACLU has raised more than $20 million. But it is work of the people behind the ribbons that are taken for granted.

The day after the election, another day that some women went on strike, calls to the National Suicide Prevention Lifeline, the Trevor Project, and Crisis Text Line surged. In schools across the country, bullying incidents skyrocketed and teachers struggled with how to handle questions about immigration. Those of us in health care faced the reality that 30 million Americans may lose their insurance coverage if the ACA is repealed. To say the least, it is has been tough 120 days at the office.

I applaud Bustle for encouraging their staff to take the day to volunteer, donate to women in need, and write to their congresspeople about issues that affect women, like paid leave, access to health services, and equal pay. But here’s the dirty secret about volunteer jobs: many times they are created just to make the volunteer feel good. With a few exceptions like working in a soup kitchen or taking caring of shelter animals, volunteers need to have some level of expertise in order to truly be helpful. Women who work towards the greater good are just as educated and experienced, though usually not as well compensated, as our sisters in the private sector. Many organizations, such as Crisis Text Line and The Trevor Project, are willing to train volunteers who can commit to donating their time on a regular basis. There are also low-cost or free programs such as Mental Health First Aid and the Family Caregiving Alliance that allows to people to build their social good skill set. People who want to be able to volunteer effectively in the future should start building those skills now.

It would be hard to find a nonprofit or school who couldn’t use an extra pair of hands, but we need those hands to belong to someone who is experienced, educated, and often licensed to do the work. We need you to do more than volunteer. We need more women to lead. You do not have to run for office to change the direction of our country — you can do it by working at all levels of the government, by launching social service start-ups, by joining a board, or taking on pro bono clients. I understand that the point of “A Day Without A Woman” was to call attention to the workplace inequalities, including shortage of women in leadership positions, in the private, public, and government sectors. But for many of my peers in the helping professions, striking would have further disadvantaged our female clients and patients that day.

This is not to shame women who participated in the strike. Fighting each other will get us nowhere. If you found meaning by taking part of the strike by protesting, donating, or volunteering on Wednesday, good for you. You may find even more meaning in rolling up your sleeves and going to work. If one person can make a difference, than the 3.5 billion of us that make up half of the population, can actually heal the world.