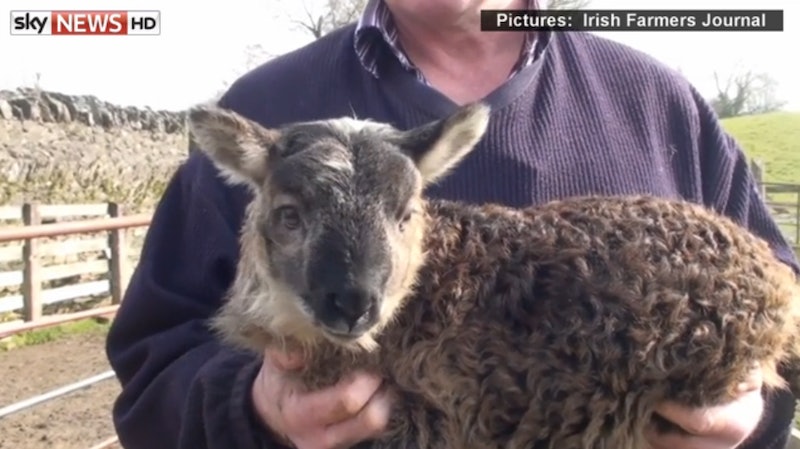 Squee! On a farm in Ireland, a rare sheep-goat mix has been born, and you should immediately stop whatever you're doing right now to marvel at how predictably cute it is. Owner Pat Murphy is raising the week-old "geep" like a lamb, and its mother is taking good care of her baby, he says. Murphy says his family has been farming for generations, and they've never witnessed anything like it before.

Murphy said he actually saw a goat mating with his sheep on a nearby hill, but he didn't put a stop to it. But he obviously underestimated the power of forbidden barnyard love when he delivered the geep about five months later.

I only have white-faced Cheviot sheep, and when this one came out it was black. That sometimes happens. But the next morning I said to myself this isn’t a lamb at all, it’s more like a goat. It was moving a bit too quickly for a lamb, its legs were very long and he even has horns like a goat.

Murphy says the geep is healthy and nimble, and he plans to keep it as long as possible.

The cross between a goat and a sheep is quite rare, and it's definitely a first for Ireland, according to the BBC. If geeps are conceived, they usually die during pregnancy or are stillborn. There have been a few other instances of such cross-breeding in Chile, Jamaica, Malta, and Botswana.

The Irish Farmers Journal interviewed Murphy and posted a video of the geep to You Tube Thursday, and the clip already garnered about 25,000 views. Murphy says he wants to hold a naming contest for the geep to raise money for a sick child in his village.