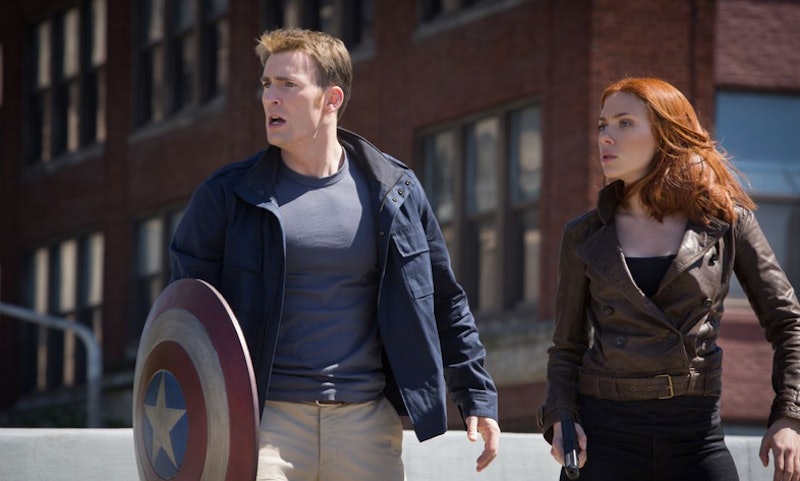 All the reports were correct: Captain America: The Winter Soldier killed it at the box office, raking in over 300 million worldwide so far . Critics were already implying that it might even be a better movie than The Avengers was, which seemed like a pretty big promise considering it didn't have Tony Stark in it (well, at least not as anything more than a dot on a screen). So why was the return of the Cap the most highly anticipated film of the year? Probably because the movie was a game changer. The big revelations of Captain America will have longstanding effect on every single film that comes in the universe after it, just like how we're still hearing about that time a bunch of aliens trashed New York before they were stopped by a couple of spies, a billionaire in an iron suit, a man in star spangled kevlar, a giant green rage monster, and an actual god.

But the two big bomb shells (you know which two I mean) weren't the only twist that Captain America had in store for the viewing audience. No, I'm not talking about the post-credit scenes either, although they did serve to prove that The Avengers: Age of Ultron can't come fast enough. There were at least four unexpected plot twists that Captain America was hiding, both good and bad.

1. Captain America and the Black Widow Aren't a Thing

Admit it: When you saw the photos from set way back when, especially the ones of the pair locking lips, you got worried that the Black Widow was taking on a different role in The Avengers film universe than you originally hoped for. Or that she and Hawkeye broke up. Or that people would start thinking about her love life at all rather than the fact that she can take down a grown man with her thighs. Captain America put all those nagging fears to rest by showing us that between The Avengers and The Winter Soldier, Nastaha and Steve have developed a close partnership and deep friendship — and nothing else. She even spends the movie wearing an arrow necklace as she tries to set Steve up with basically every woman they work with.

If you were looking forward to the addition to Agent 13 aka Sharon Carter to the super (human) woman team of Maria Hill and Nastasha Romanoff, prepare to be disappointed. Agent 13 gets about as much screen time as the sneakers Natasha and Steve wear in their civilian disguises. In fact, it's possible that the sneakers got more focus. That's not too much of a surprise, as Emily VanCamp admitted that The Winter Soldier was just planting seeds for Agent 13's future appearances in the Marvel Cinematic Universe. It's just that there's a difference between planting seeds and holding them in your hand and expecting them to grow in your palm. Then again, maybe I'm just bitter that there was no Charlie's Angels-esque back-to-back-to-back takedown featuring Maria, Natasha, Sharon, and the poor thugs who thought they looked easy.

3. It's Really Easy to Sneak into the Smithsonian

No, really, it is. Steve and Bucky both pay a visit to the Smithsonian "disguised" as ordinary people, as if anyone's not going to notice two broad-shoulder six-foot heavily-muscled Grecian gods wandering around staring at their own faces in an exhibit. And they were mostly right. Even if you want to argue that they both went in the daytime when anyone can get into the Smithsonian, there was the part where Steve breaks in and steals his suit straight off the statue version of himself. Because apparently it's that easy. No alarms. No guards rushing in. Just Stan Lee as the security guard correctly fearing that his job will be in jeopardy over this shockingly easy theft.

The mission? Hunt down HYDRA's enemies. The method? Attack them in the middle of the street with your giant gun and metal arm. It seems like the Winter Soldier has a definite M.O. and that M.O. appears to be causing immense traffic jams in Washington DC. It makes sense. As mobile as your car allows you to be, you're still trapped inside a metal container that is subject to the whims of the road. If you hit traffic, you're not going anywhere. If you hit really bad traffic, you may as well put your car in park and wait. It just seems like the heroes would have had an easier time evading the Winter Soldier if they'd just run everywhere. How many laps can Captain America do without tiring again?