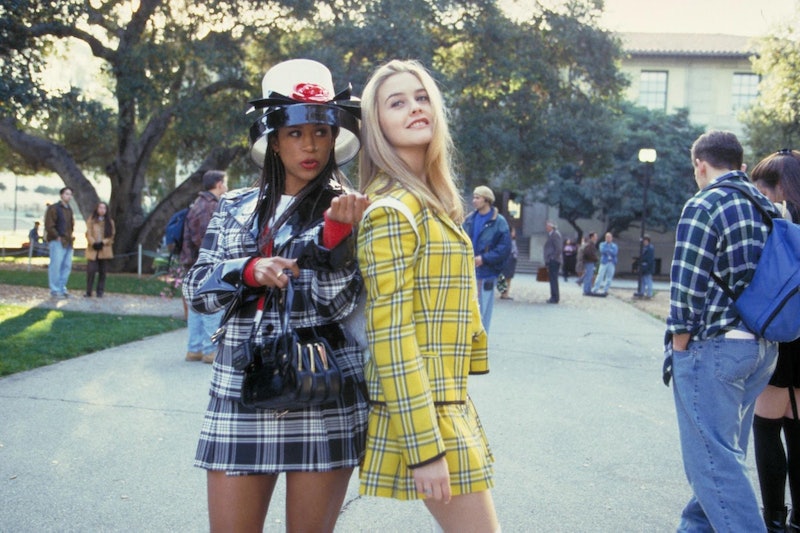 Whether you adore it or find it a symbol of all things hipster, plaid is one of the most ubiquitous patterns in modern fashion. From Alexander McQueen to Vivienne Westwood, designers adore the cross-hatched pattern and its simultaneously preppy and punk connotations. Considering its current popularity, plaid's history may surprise you — after all, it hasn't always been our country's pattern of the choice. Let's take a look at how plaid got so damn popular.

Most of us don't know the difference between plaid and tartan. Tartan refers to the unique cloth patterns which distinguish one Scottish clan or geographical region from another. By the original Scottish definition, a "plaid" was a Celtic kilt or blanket which served as an outer layer to battle the Highland elements.

Plaid, as we know it, was later appropriated by British and American manufacturers, who created patterned fabric which resembled tartan. Written records from 1538 place the fabric in high esteem amongst royalty including King James V, who gifted his wife with several bolts of the material.

Though many of us may want to impose a plaid embargo on our most hipster-adjacent friends, tartan was actually literally forbidden in Britain during the 18th century. The fabric's rebel uniform association with the Scottish Rebellion of 1745 against the union of Scotland and England, making tartan prohibited in the country for nearly half a century under the Dress Act. The print didn't really resurface again until 1782, when plaid became legal, and it became in vogue to wear plaid gowns to formal occasions.

During the 19th century, the pattern made the leap from Europe to the U.S., where it became known by the moniker we know today: plaid. Midwest company Woolrich Woolen Mills gave plaid's popularity a boost when they originated Buffalo plaid in the 1850s. Buffalo plaid's distinctive red and black checkered pattern became a staple amongst those in outdoor professions — most notably, lumberjacks.

Clothing company Pendleton debuted a mass-produced plaid shirt for men in 1924, which became an instant casual wear hit. In 1936, flannel caught its next big break: During a particularly bitter winter snowstorm, the little town of Cedar Springs began to produce its own red flannel, and the print began to take root as a winter staple. Pendleton responded to the upswing in interest by debuting a female version of the shirt in 1949.

After several decades of developing into one of the United State's favored patterns, plaid returned to its insurgent origins as a form of liberated, devil-may-care style. Plaid became ubiquitous in the 1970s, adorning everything from suits to interior design elements. Though originally imbued with sweet, rustic connotations, the plaid shirt became part of a more sexualized look when The Dukes of Hazard's Daisy knotted hers above the waist and wore it with daring hot pants.

Across the pond, Queen Elizabeth II's Royal Stewart Tartan was appropriated by the punk movement in the form of ripped layers and shredded shirts. The look was famously intended to give the fabric, associated with the monarchy, an anarchic spin. Spurred by the cultural phenomenon, Vivienne Westwood began to popularize her famously punk-inspired plaid on the coattails of the movement. Plaid was about to become a symbol of rebellion once more.

The 1980s proved a pivotal decade for plaid. Movies from The Heathers to St. Elmo's Fire had plaid in a preppy stronghold, and public figures including Princess Diana exhibited the fabric's more pristine potential. But meanwhile, the grunge movement was starting to take form in the Pacific Northwest, spurring what would become plaid's most notorious decade yet.

The plaid flannel shirt became the unofficial symbol of the grunge movement in the early 1990s. Bands like Nirvana, The Breeders, and Pearl Jam rocked plaids in their signature, grungy fashion. Newcomer to the fashion scene Marc Jacobs appropriated the style with his line in his notoriously grunge-inspired Spring 1993 collection, and has continued his love affair with plaid ever since.

But despite plaid's counterculture reputation, popular culture seemed determined to make plaid both mainstream and idiosyncratic, culminating with Cher's style in 1995's Clueless.

In 1995, couture designer Alexander McQueen took up Jacobs and Westwood's gauntlet by infusing his collection with tartan, naming the collection "Highland Rape" in reference to Scotland's mistreatment by the English in 1800s.

Today, plaid is a bit of a maverick pattern. While J. Crew models pair perfect red lips, slightly mussed buns, and pearls with their popped-collar plaid shirts, couture designers have taken the style on a more rebellious ride over the past several years. Fall 2013 became the autumn of insouciant plaid, and when Hedi Slimane designed Saint Laurent's Fall 2014 line, critics were aghast at his blatant channeling of grunge.

Plaid has also of course become associated with Hipsters, who are both referencing the '90s and lumberjacks with their nostalgic style.

What we glean from plaid's historical roller coaster is this: no matter the decade, plaid will always carry with it the faintest hint of irreverence, whether it's paired with pressed khaki's or a pair of baggy jean overalls.

Either way, we doubt this trend will ever go out of style.