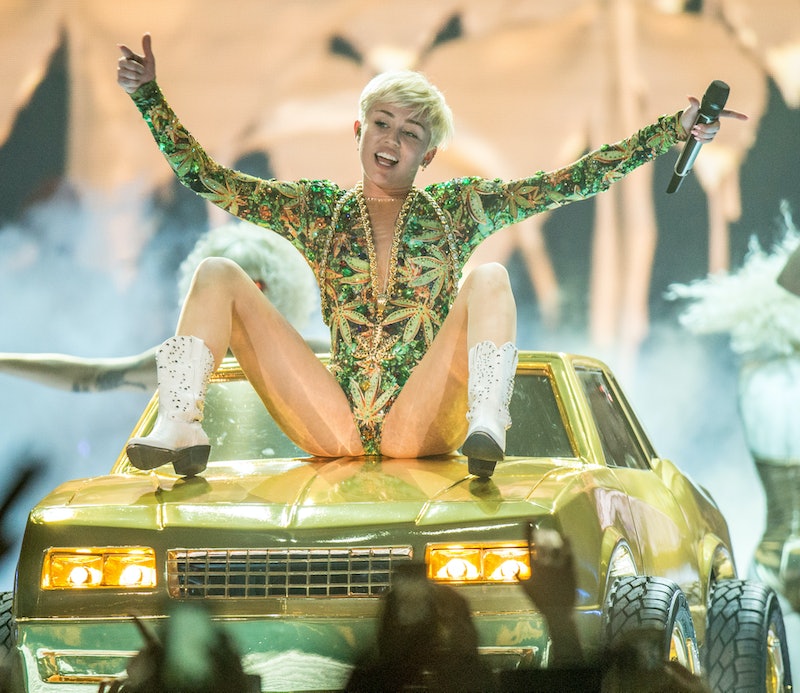 In Elle magazine's May cover story, Miley Cyrus commented on feminism again, but don't worry. It's good news, I promise. It was just a few months ago back in 2013 when Cyrus declared herself "one of the biggest feminists in the world", but judging by this recent interview, Cyrus has since then realized how her influence can benefit the conversation about what it means to be a feminist — even if her language is a little off-putting.

When Cyrus first announced that she identified as a feminist, she faced criticism over her hyper-sexualized image, mostly because people couldn't quite pinpoint whether or not her behavior was the result of "the Man" and the mantra that "sex sells" or a genuine desire to feel liberated and comfortable in her own skin. We still haven't quite figured that out, but it might not even matter anymore. Cyrus has more to contribute than just her image.

I'm just about equality, period. It's not like, I'm a woman, women should be in charge! I just want there to be equality for everybody.

And hey, that's what feminism is all about, right people? The "Wrecking Ball" singer continued:

I still don't think we're there 100 percent. I mean, guy rappers grab their crotch all fucking day and have hos around them, but no one talks about it. But if I grab my crotch and I have hot model bitches around me, I'm degrading women? I'm a woman—I should be able to have girls around me! But I'm part of the evolution of that. I hope.

I know, your first reaction to this is probably something like, "She's talking about feminism and using terms like 'hos' and 'hot bitches; to describe women?" And you're right — the language here is neither a shining nor empowering moment for Cyrus, but when we look past her poor choice of words, she's actually saying something important here. We have to acknowledge the fact that there's something extremely positive about Cyrus continuing to engage in the feminist conversation.

Unlike her previous declarations of feminism, it seems like Cyrus' opinions have matured in Elle. She's not just calling herself a feminist, she's telling us what feminism means to her and she's providing a valuable commentary on its progress. As an extremely newsworthy public figure, it's great that she's addressing her views in a way in which her young, mostly female fans can understand. She's not making it a bad word like Kelly Clarkson kind of did, or like Kirsten Dunst did; she's making it about equality, a word these days that everyone can rally around.

Say what you will about her tongue, her nakedness, and her twerking, but at least Cyrus isn't making "feminism" something to be afraid of.