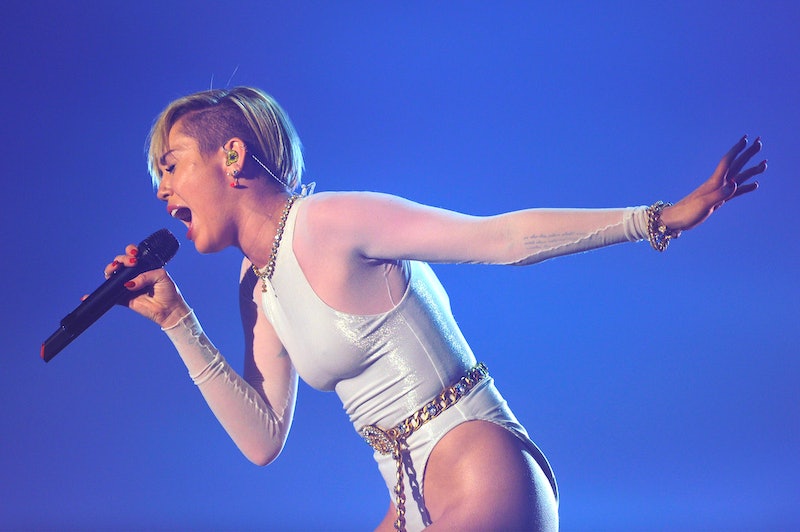 Over the past few months, practically everything Miley Cyrus has said or done has gotten the media's attention, whether it's as extreme as smoking a joint onstage or as innocuous as covering Lana Del Ray. Love her or hate her, at this point, most people just want the fanfare to die down. Judging from the latest interview given by the 20-year-old star, though, it doesn't seem like that's likely to happen anytime soon.

In a recent interview with BBC Radio 1's Newsbeat, Cyrus said she feels like "one of the biggest feminists in the world." She continued:

I tell women to not be scared of anything. There’s absolutely no contradiction at all between being a feminist and taking your clothes off and being comfortable about displaying your sexuality. I’m for anybody and anything, I don’t care what you want to do, what you want to look like.

Most people's first reaction to the quote is probably something like this: say what?! Whether or not Cyrus's twerking and frequent nudity exhibit feminist behavior is an issue that's been up for debate ever since the antics began, but even those who say that it is have to take issue with the singer declaring herself one of the biggest feminists in the world. Surely she's not comparing her "Wrecking Ball" video to the work done by feminists like Malala Yousafzai or Hillary Clinton, women whose ideas of women's rights revolve around education and civil liberties, not taking one's clothes off and singing about drugs?

Yet when it comes down to it, Cyrus is not technically wrong. She's a hugely popular star with an enormous global fan base. If she considers herself to be a feminist, then, numbers alone, she is one of the biggest feminists in the world. Sure, her feminism may not fit the typical mold, but her words and actions do reach millions, if not billions, across the globe. Chances are, more people have heard of her than Gloria Steinem, and as unsettling as that fact may be, it's the truth. Cyrus is a worldwide force, and if she's a feminist like she says she is, then she's one of the most widely-known feminists of this era.

Of course, one could argue that Cyrus isn't feminist at all, and many have. Her constant nudity is more beneficial to male studio execs and audiences than to Cyrus, critics say, and while she may be aware of everything she's doing, she's misled about who is actually in control of her sexuality. In actuality, they argue, she's helping to promote the long-known fact that sex sells, rather than the idea that women have power over their own bodies. Yet many others disagree, saying that while Cyrus's actions aren't traditionally feminist, they are her own versions of female empowerment. And feminism, they argue, is not about fitting into one mold, but rather, each woman having the opportunity to decide how she wants to live her own life. If Cyrus's version of feminism means dancing scandalously and appearing half-nude, then that's her choice, and no less feminist than anyone else's lifestyle decisions.

Regardless of what you believe, the important thing to note is that Cyrus, like so many other well-known individuals over the past few weeks, is talking about feminism in the first place. For so long, feminism has been a dirty word that many people, especially celebrities, are afraid to discuss, for fear of appearing as the angry, man-hating stereotype that's perpetuated our culture for decades.

Yet recently, several stars have decided that feminism is a topic worth discussing. For some like Cyrus and Lorde, that's meant talking about and embracing their own feminism. For others, like Kelly Clarkson and Lady Gaga, that's meant explaining why they're not feminists and what the word means to them.

While the former is obviously preferable, the fact that feminism is being talked about at all is a huge deal. Hopefully, Cyrus's quote will encourage critics and other artists to continue the discussion and contribute their own thoughts on feminism, because it's high time that the topic receives worldwide attention. And if that means Cyrus gets to be "one of the biggest feminists in the world," then so be it; she's helping to bring feminism to the masses, and that's all that really matters.

More like this
Sandra Bullock, Girlboss Extraordinaire
By Matt Harkins & Viviana Olen
The 'Hocus Pocus' Sequel Finally Has A Release Date & It Makes Total Sense
By Shannon Barbour and Radhika Menon
On TikTok, Miley Cyrus’ “Malibu” Is The Soundtrack Of Growth
By Courtney Young
Kendall Jenner Isn’t Ready To Have A Baby Amid Her Mom’s Wishes
By Jake Viswanath
Get Even More From Bustle — Sign Up For The Newsletter