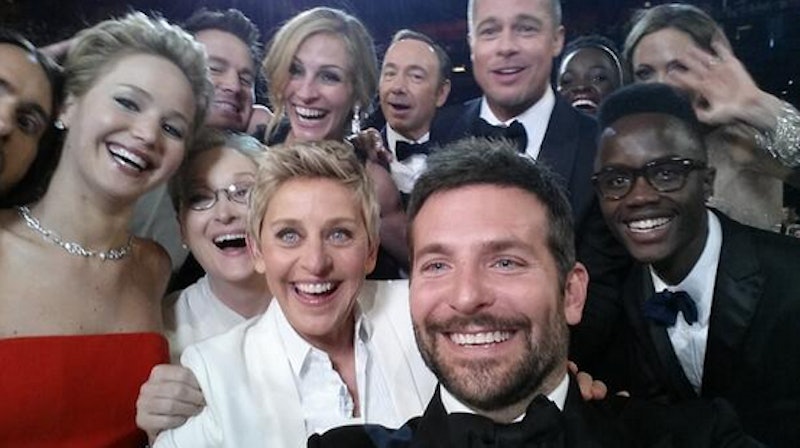 It's been a little over a month since Ellen DeGeneres posted her famous Oscar selfie on Twitter and broke the record for most retweets ever, but now the monetary value of the Oscar selfie has been determined. Maurice Levy, head of the advertising company Publicis Groupe, says DeGeneres' Oscar selfie is worth between $800 million and $1 billion. Levy is the CEO for Publicis which handles international advertising for Samsung, the brand of cell phone DeGeneres used to take the photo. Levy, who spoke about the selfie at a marketing event, got his estimates based on the selfie's large amount of social media presence.

According to Twitter's numbers, the selfie has been seen by 37 million people and 43 million tuned into the Oscars and saw DeGeneres actually take the photo. In addition to declaring the selfie's worth, Levy said that his company was in charge of the product placement.

It wasn't always clear that this was pre-planned; although it always seemed very suspicious. Soon after the Oscars, the Wall Street Journal reported that according to two sources, "As part of its sponsorship and ad pact for the Oscars with ABC, the TV network airing the show, Samsung and its media buying firm Starcom MediaVest negotiated to have its Galaxy smartphone integrated into the show." At that time, managing director for branding firm Landor Associates, Allen Adamson told WJS, "It was a great plug for the Samsung brand. Ellen's selfie is going to be more impactful than their commercials. You can't buy that magic of going viral."

It's hard to imagine the selfie really being worth that much money in terms of cell phone sales for Samsung, but it makes more sense if you think of this in terms of how much an equal amount of ad space would have cost. This is similar to the reports that DeGeneres ordering pizza for A-listers during the awards show got Big Mama's and Papa's Pizzeria over a million dollars worth of advertising for free simply because the amount of airtime the pizza received could have been sold to advertisers willing to pay a big bill. But hey, the picture probably sold a few phones too. It obviously takes a clear selfie.

More like this
100 Clever Gifts Under $25 When You Have No Idea What To Get
By Maria Cassano
Using Your Pet’s Name As A Password? Here’s Why You Might Want To Change It
By Cristina Sanza
The 10 Best Waterproof Watches For Swimming
By Lauren Moison
Pete Davidson Mentioned Kanye West & Ariana Grande In His Last 'SNL' Sketch
By Grace Wehniainen
Get Even More From Bustle — Sign Up For The Newsletter