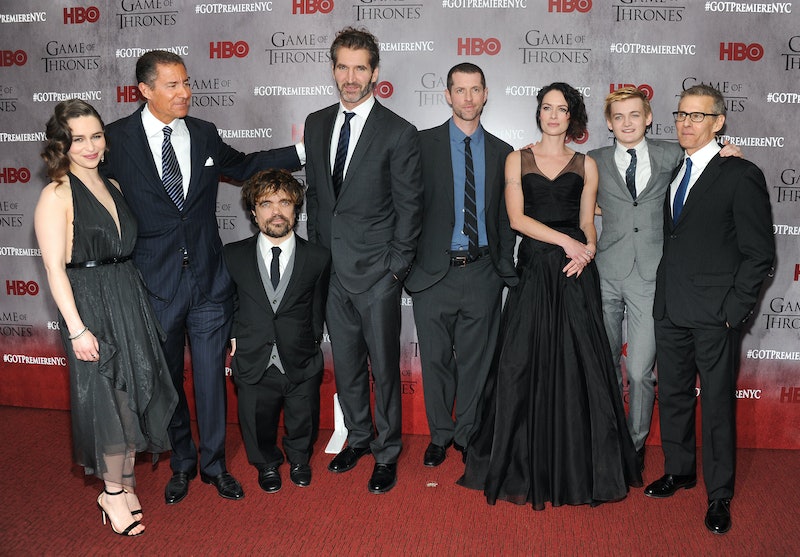 Not too surprisingly, Game of Thrones Season 4 premiered to record ratings on Sunday, and to rampant speculation as to what the season holds for each of its characters. And though fans who have read George R.R. Martin's books may already know the answers, the rest of us are left to wonder whether the Westerosi (and Dothraki and Dornish) people we've grown to love (and certainly to hate) will even make it to Season 5.

We're all well aware by now that this is not a show that shies away from killing beloved characters. In fact, hoping that any one character will survive even past the next episode is a bit like Jorah hoping Daenerys will ever return his obvious affection- it's a futile effort that only ends in heartbreak. The best we can do is hope that before the God of Death comes for whichever character we've grown most attached to, they'll get their moment to do something really, really awesome.

Here are the absolute coolest possible things these Game of Thrones characters could do in Season 4.

There's very little Arya could do in Season 4 that WOULDN'T be considered epically cool. She's a 13-year-old spitfire with an equally sharp tongue and sword, and she's not afraid to use either. I'd love to see Arya turn into Game of Thrones' O-ren Ishii, and use the need for vengeance instilled in her as a child to become the most powerful and feared outlaw in all of Westeros, with The Hound as her personal bodyguard. Not that she needs one.

Another character who exudes Barney Stinson -esque levels of awesome, although I've got the distinct feeling that with Daenerys, Arya, Oberyn, Stannis, and maybe even his wife Sansa all out for Lannister blood, he may not be long for this earth. The only un-awesome thing about him right now is his treatment of Shae. I hope in Season 4, we see Tyrion really go to the mattresses for the woman he loves— preferably in the form of a balls-to-the-wall throwdown with Tywin.

Dany's got a massive army that only seems to be growing in number and loyalty, plus her dragons are getting bigger and bigger, so she's in a pretty good position to take the Iron Throne. But let's be real, the coolest thing Daenerys could do this season has absolutely nothing to do with politics, or even with her noble slave-freeing efforts. We just want to see her learn how to ride her dragons. God that would be cool.

Jon Snow just lost himself the best woman north of the wall, and whether or not he was in the right to betray Ygritte, turning his back on the Night's Watch is the probably only way to make things right. I want to see Jon put his life on the line for what he believes in- and if that means dying for the things he wants, all the better.

Cersei used to care about two things, her children and Jaime. Now, she appears to care about only one, wine, which means Cersei is a bit of a loose cannon. We know what, say, Kingslayer Jaime is capable of, but Cersei's hair-trigger temper is only the tip of the iceburg. The coolest thing Cersei could do in Season 4 would be to let it all go— which, for some reason, I don't think will end too well for Margaery.

Cersei is rejecting his advances, his sword hand is gone, he can't go back to Casterly Rock, and he's barely able to rejoin the King's Guard. If I were Jaime, and I wanted to do something awesome in Season 4, I'd reveal my status as the true father of the king and let the chips fall where they may. Preferably at some sort of large gathering— a royal wedding, perhaps? In the ensuing chaos he can grab Brienne and run off; being ostracized seems to help bring those two together.

A lot of people are clamoring for Joffrey's head on a platter, but no one has more right to it than Sansa. Beyond that, no one has more access to it. After all, she lives in King's Landing with full access to the royal court. If she has been secretly plotting revenge, as has been suggested, it would seem that being the king's sister-in-law is a pretty advantageous position for her to be in. The coolest thing of all would be if Season 4 has Sansa taking the revenge she so rightfully deserves.

He can die. Slowly. At Sansa's hand.

My wishlist for everything cool Bran could do in Season 4 is just a list of animals it would be stellar for him to warg into. Topping that list is Hodor, who I think is going to be a key player in Season 4— Bran can't walk, but Hodor can, and if Hodor becomes the little lord's avatar, Bran might just be the dark horse to restore the Stark family to its former glory.

A fight to the death for the hand of the Khaleesi. Of course, Jorah wins.

Unless Tyrion turns his act around, DTMFA.

Just by looking at her you know that Margaery would kiss you in order to stab you in the back, so it's surprising she's been so passive for so long. I'm sure she's plotting her way to the throne, and I would love to see her there (at least, until Daenerys and her army reach King's Landing). Can you imagine all the fun to be had with Lady Olenna as the Queen's Hand? Speaking of whom...

We're one episode in and already the fantastic Diana Riggs has Lady Olenna casually tossing expensive necklaces over her shoulder. She's just the best, it's hard to imagine what she could possibly do that would be more fun to watch— except, maybe Tywin. I'm not going to lie, I think they'd make a cute couple.