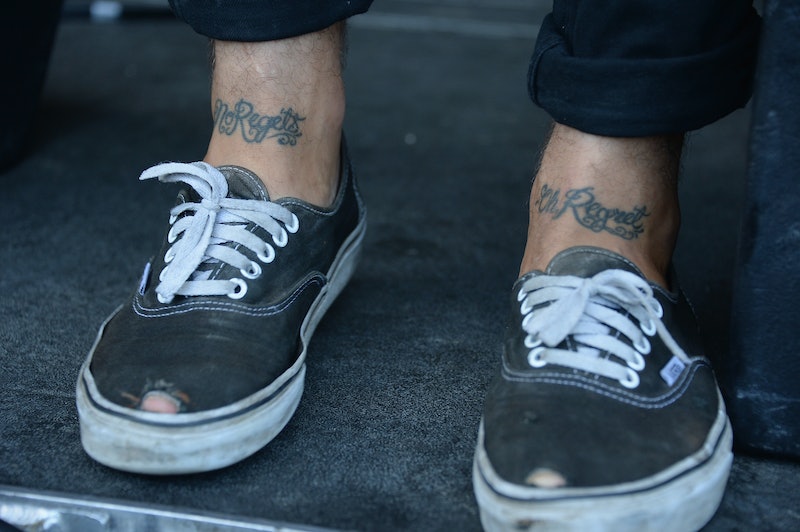 Now that we're "adults," going to music festivals tends to involve more craft beer tastings than it does moshing. But back in high school, many of us could be found with our rubber bracelet-clad arms and Chuck Taylor-covered feet marching into the Vans Warped Tour. Oh, be still, my teenage pop-punk heart.

Us pop-punk fans in high school weren't exactly "punk," and weren't exaclty the stoner "sk8er" kids — we were somewhere in the middle. We had just enough angst that whatever color our hair was that month was totally valid. There was as much eyeliner as there were tears. In short, we had a lot of feelings in high school and we etched it all over our notebooks and playlists. Music, the mall, shows, spelling confusion with a "K", and mid-level trouble-making was our calling.

Anyone else still wistfully looking at their CD collection of The Ataris, Blink-182, Taking Back Sunday, Thursday, New Found Glory, The Starting Line, and Brand New and still wondering why you cared so much about the difference between pop-punk, emo, and screamo?

If you were a lover of Manic Panic and studded belts in the early 2000s, then this is for you. Because there are some things only us former pop punk kids can truly understand.

THESE were the places where you wasted your summer job money

T-shirts, UFO pants, Dickies shorts, bumper stickers for cars you didn't own, dumb key chains, and glitter. All of which were over-priced.

and This was your Bible:

The Vans Warped Tour was the Pinnacle of your summer

The acoustic encores were the ultimate bragging right.

No chain wallet could save you from everything falling out of your pants when crowd-surfing.

There was a MAJOR difference to you between "Shows" and "Concerts"

And yet, you still own all of the albums.

And you also know all about the "Is that what you call tact? You're as subtle as a brick in the small of my back. So let's end this call, and end this conversation" lyric controversy.

Sunny Day Real Estate, Lifetime, and Joy Division were required reading for you

These pens were for your Jansport ONLY

and This was on most things you owned

The titles of the albums you listened to basically described your emotional state at all times:

Most of the bands you loved came from New Jersey

And you debated it endlessly with your friends. (Everyone hated Home Grown.)

You shelled out a lot to see the Pop Disaster tour

And all you remember is Travis Barker's rotating drum kit.

Your AIM screenname probably involved the words "monkey" or "penguin"

...you listened to Dashboard Confessional

And cried into your Taco Bell.

And you were judged. Hard.

And you mastered the art of making out with lip rings

You know the album start-to-finish and can sing the whole thing without any accompaniment.

still, You hated being called "emo"

yes, NO ONE UNDERSTOOD YOU

Except the thousands of friends you made at shows, the people who gaving a nod of approval to your black Ataris tee, and everyone else in high school who just needed to work out their emotions with a little screaming, and a lot of sing-a-longs.