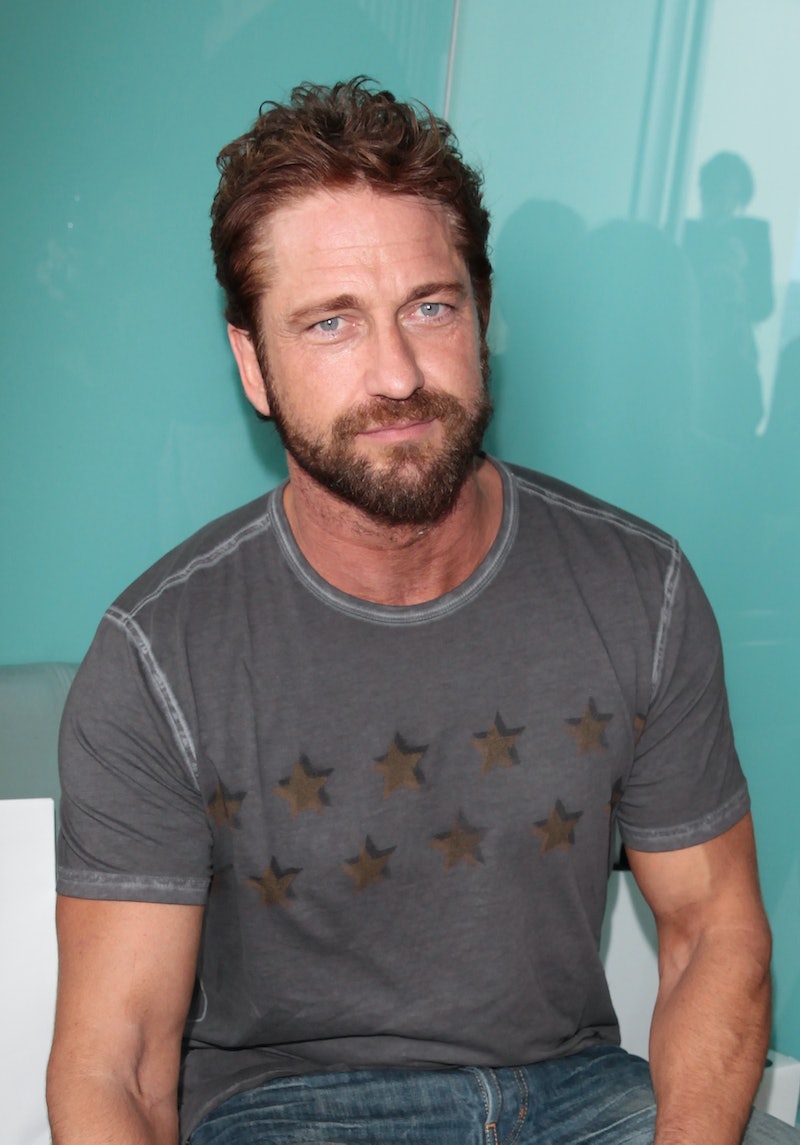 With temperatures rising, it can only mean one thing: cheesy disaster movie season is well on its way. Every year Hollywood delivers a bevy of films perfect for watching with friends during a thunderstorm or escaping to an air-conditioned theater during a heat wave. And an upcoming project that Gerard Butler is going to star in just might take the cake for the best/worst natural disaster movie of all time. Geostorm, according to The Hollywood Reporter, has Butler playing "a stubborn but charming satellite designer who, when the world’s climate-controlling satellites malfunction, has to work together with his estranged brother to save the world from a man-made storm of epic proportions. A trip into space follows, while on Earth a plot to assassinate the president begins to unfold.”

Family feuds, Butler’s signature smarmy charm, a mega-storm, space travel, AND an assassination plot!? Who let SNL's Stefon write movie treatments? This has the makings of a contender for the most far-fetched disaster film of all time. It has the trappings of every cheesy natural catastrophe film motif ever made. You could almost call it a... a... a perfect storm.

As wonderfully bad as Geostorm sounds, were it not for the phenomenal summer blockbusters before it, this film might have never been dreamed. Here is the ranking of Hollywood’s finest disasters:

Plot: The granddaddy of disaster films. A rag-tag team of storm-chasers are off to track down the tornado of the century in order to release their ground-breaking storm tracking technology device known as Dorothy. They’re up against rivals, the elements, and LOVE.

Most insane moment: “WE GOT COWS!”

How bad is this movie: Not at all. This is actually a great film, mostly due to the performances of a truly stellar cast including the late Philip Seymour Hoffman.

Plot: An asteroid is careening toward Earth and the president enlists a rag-tag team of oil drillers to go into space, land on the Asteroid, and blow it up before it destroys the planet. They’re up against a mega space-rock, time, and LOVE.

How bad is this movie: I don’t wanna close my eeeeeeeyes, from watching just how bad this movie is. It’s terrible. Genuinely horrendous. But also one of the best bad action blockbuster cheese-fests ever.

Plot: A dormant volcano is discovered to be active by a rag-tag team of meteorologists. It’s up to Pierce Brosnan, some kids, and a truck that can survive ALL of the elements to save this sleepy mountain town. They’re up against lava, ash, and LOVE.

Most insane moment: When grandma jumps into the burning acid lake to push a rowboat roughly 10 feet.

How bad is this movie: It’s the definition of “It’s so bad, it’s good.”

The Day After Tomorrow

Plot: A mega-storm strikes Earth and it’s up to a rag-tag team of paleoclimatologists (it’s a thing!) to save the planet from another Ice Age. A father must reach his son who is trapped in New York. To get there, he must go up against fire, ice, and LOVE.

Most insane moment: When the tsnunami strikes Manhattan. It is a bit eerie to watch in the aftermath of Hurricane Sandy.

How bad is this movie: It’s actually not THAT bad. Sure it’s way melodramatic and epic beyond measure. But hey, Jake Gyllenhaal.

Most Insane Moment: When it was Armageddon.

How bad is this movie: Armageddon was bad, and this is a bad rip-off of that movie. Not even Morgan Freeman could save it.

More like this
You Can Finally Stream 'Ticket To Paradise' At Home
By Chloe Foussianes
Jodie Turner-Smith & Joshua Jackson's Relationship Timeline Includes Her Proposing
By Jake Viswanath
J.Lo Wants To Make A Sequel To This Movie With Ben Affleck
By Jake Viswanath
This James Bond Event At Abbey Road Studios Was A 007 Fan's Dream
By Samantha Rollins
Get Even More From Bustle — Sign Up For The Newsletter