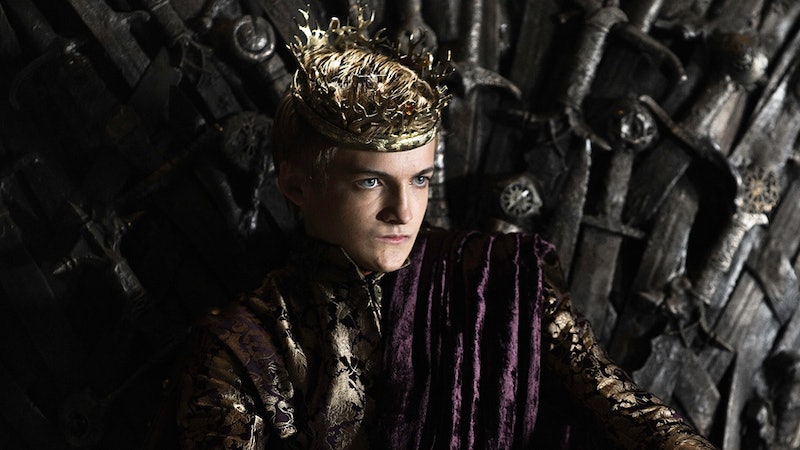 HBO's preview of Sunday’s episode of Game of Thrones , "The Lion and the Rose," has ensured us plenty of Joffrey at his worst: dressed up, probably drunk, and with all eyes on him at his royal wedding to Margaery Tyrell. If history has taught Game of Thrones viewers anything, it’s that no good comes of weddings. Or marriage. Or being in the vicinity of other people, really. So, it’s reasonable to expect King Joffrey, His Royal Suckness to get up to some mischief; and by mischief I could mean anything from general taunting, to sexual sadism, to chopping his fiancee’s head off. The boy kinf runs the gamut.

No bit of evil is too minimal, no opportunity to ruin (or end) someone’s day (or life) too small. Let’s take a look at the timeline of King Joffrey's worst offenses in preparation for Sunday night's big nuptials (or as the log line attempts to tease, "breakfast," but we know better). Somehow, he's got a willing human to legally tie herself to him forever (I support you, Margaery):

No “I’m sorries” for the Starks

In one of his least lethal evil acts — it was his Uncle Father who did the dirty work in his stead — Joffrey refused to offer the Starks his condolences after Brann’s near fatal injury in Winterfell. It's still an important bit of Joffrey’s budding psychopathy though, as it resulted in everyone's favorite Slap Heard ‘Round Westeros.

The Deaths of Mycah and Summer

It would have been easy to write off Joffrey as an awful but harmless kid after his multiple Stark snubs at the beginning of the series — but not in George R. R. Martin's house. After an afternoon spent convincing Sansa he was the Justin Bieber of King's Landing (I guess that should have been our first sign), he gets in a little tussle with Arya, loses (because, duh, Arya), blames his injuries on Sansa's direwolf Lady, and the loss of his sword on the butcher's boy Mycah, resulting in both of their deaths.

The Beheading of Ned Stark

Ned was all we had. The one force of good in this twisted race for power we watch every week. With the order to chop the former Hand of the King's head off (just after telling Sansa, his fiancee, that he would spare her father, and against all of his advisors' advice, mind you), Joffrey effectively ignited the War of Five Kings and ensured that he was the most hated character on television... ever.

After rumors started flying that Joffrey was the icky, icky incest spawn of Cersei and Uncle Jamie — meaning there were a whole a heap of Robert's children out there with a more legitimate claim to the Iron Throne then him — Joffrey ordered all of the bastards to be killed by Janos Slynt. Killing babies was a new low, even for Joffrey. (Plus, you missed one, asshole!)

The Degradation of Sansa Stark

Killing Sansa' father, banishing her family and holding her hostage via engagement ring just wasn't enough mental torture to fulfill Joffrey's needs. After he went full Queen of Hearts on Ned, Joffrey really turned a corner, showing his evil off like a shiny new toy. When Cersei told him he shouldn't harm his betrothed, he simply made his bigger, stronger bodyguards do it for him. And when it seemed like maybe Sansa hadn't wanted to die for about two seconds too long, he dragged her up to the top of the castle and forced her to stare at her father's tarred head. Of course with Full Evil Joffrey came the first glimpse of Strong(ish) Sansa. "Or maybe he will give me yours." YES!!! (But also, no.)

Letting Mommy Call Him in From Battle

Joffrey didn't directly cut anybody's head off when he left the Battle of Blackwater; but he did start a war that would cost the lives of tens of thousands, tear families apart all over his land, and then run away from battle the moment Cersei got nervous someone might helpfully rid the world of her crazy ass son. Thank goodness for Tyrion.

Joffrey first showed us his particular brand of sexual sadism when his uncle gave him two prostitutes for his name day and he proceeded to hold them at crossbow-point while forcing them to abuse each other. But it wasn't until Season 3 that he really came into his own, tying King's Landing's most ambitious prostitute, Ros, to a bedpost and shooting her up with arrows. Sick, sick, sick.

Something must be done about this boy.