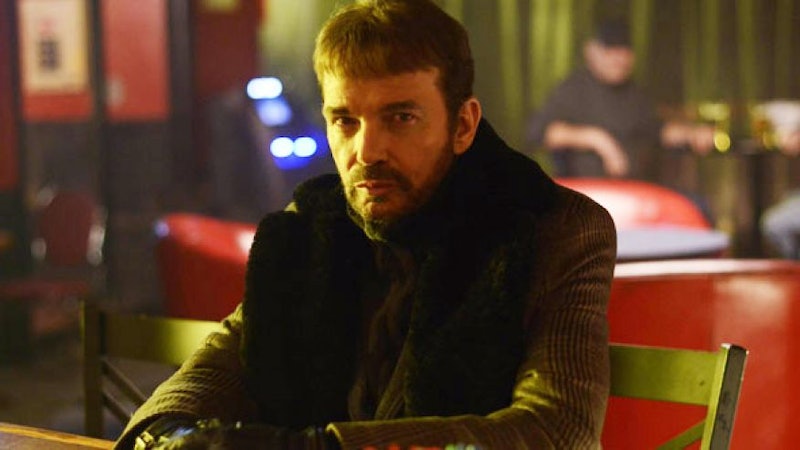 When FX's newest drama Fargo premieres Tuesday night, expect lots of murder and many "You betcha"s, but perhaps less Steve Buscemi and fewer woodchippers. It's also got a whole lot of Billy Bob Thorton. You see, the TV show is not a remake of or sequel to the beloved Coen Brothers' film. In a unique creative decision, this adaptation will take place in the same universe as the film, while containing none of the same characters or plots. The two properties will be tied together by their location, murderous themes, and oddball sense of humor — but otherwise they'll be completely separate entities. This allows the writers the freedom to craft their own stories, and it also means that the audience will have no idea what to expect, especially when it comes to Thorton's Lorne Malvo.

Creator Noah Hawley has filled his cast with A-list talent, including familiar faces like Martin Freeman (The Hobbit, BBC's Sherlock), Colin Hanks (Dexter), Bob Odenkirk (Breaking Bad), Oliver Platt (The Big C), Kate Walsh (Private Practice), and Glenn Howerton (It's Always Sunny in Philadelphia). The biggest name on board is undoubtedly Thornton, who's appearing in his first major television role in over two decades. But since we don't have the plot of the movie to guide us, the identity of his character is something of a mystery.

We know that Thornton (who previously worked with the Coens on their 2001 film The Man Who Wasn't There) will be playing a man with the strange name of Lorne Malvo. But who exactly is Mr. Malvo, and what's he doing in snowy Minnesota? FX's website describes the character ambiguously as, "a rootless, manipulative man who meets and forever changes the life of small town insurance salesman Lester Nygaard." Lester is the character played by Freeman, so we know that Bilbo and Bad Santa will be spending quite a bit of time together.

What is this "rootless and manipulative" man going to be up to? FX released the first 7 minutes of the premiere to whet our appetites, and it contains our biggest clue so far. The episode opens with Lorne driving down a dark highway, with muffled thuds coming from the trunk of his car. When a deer causes him to swerve off the road, a man clad only in his underwear bursts out of the trunk and runs off across a snowy field, as Lorne stares forlornly at the dying deer.

So Lorne is a rootless manipulator with a naked man in his trunk. Clearly not everything's on the level with this guy. What does Thornton himself have to say about his character?

He's also fond of using animal metaphors to make a point. When Lorne explains his life philosophy to Lester, he says, "We used to be gorillas. All we have is what we can take and defend." And when someone tries to sell him a crossbow to defend himself when a zombie apocalypse turns Earth into a dog-eat-dog world, he tells him, "It’s already a dog-eat-dog world, friend. I don’t know how much worse zombies could make it."

Tune in to the Fargo premiere on FX at 10 PM ET to meet Lorne and the rest of the cast of eclectic characters.