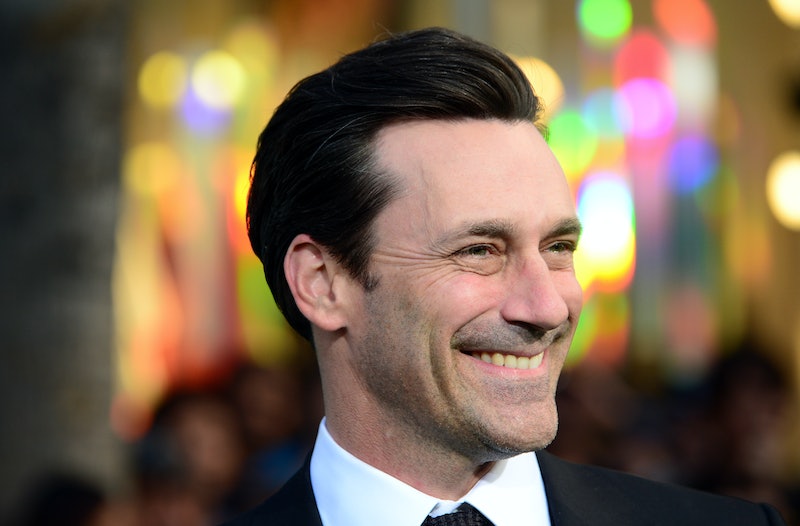 Jon Hamm is continuing to make big strides when it comes to being The Best. In the past couple of weeks, he's returned as Don Draper on Mad Men, been outed as a contestant on a 90s dating show, and admitted that Budweiser commercials make him cry. Now he's added yet another triumph. Jon Hamm was a guest on Sesame Street for a second time and it's is even better than the first because he's teaching a Muppet about emotions. Yes, this means Jon Hamm is capable of expressing emotions other than Don's constant looks of skepticism.

In Hamm's first appearance on the Street , he taught Elmo about sculptures. (Sculptures?! Well that explains why this country is so far behind the rest of the world in math and science!) That clip was good, but this one wins because has Hamm gets to explain the word "frustrated" and show us why he should have taken home an Emmy long ago.

My research has found that Hamm doesn't seem to be making a second appearance on the show, but instead filmed a bunch of these at once that Sesame Street has released slowly. In fact, the first clip was released almost exactly a year ago. In both videos he's wearing the same clothes and the same beard that let's you know he's in Hamm mode rather than Draper mode.

If you're not sure about watching the entire thing, just skip to 1:18 to see him describe being amazed. "It's this feeling that you get when you see something that you've never seen before." Like an awesome pitch for an women's pantyhose ad, Jon?

In a second, but less awesome, clip Hamm gets quizzed on the letter "O" and, in case you were wondering, he knows all of his letters.

More like this
Kim Kardashian’s “Gym Time” Video Features A Bikini & Thigh-High Boots
By Grace Wehniainen
Kylie Jenner Was Almost Named After *Another* Iconic American Family
By Grace Wehniainen
It’s Official: 'The Bachelorette' Is No Longer A Fairy Tale
By Samantha Allen
What's New On Netflix: A Third '365 Days' Movie & Lili Reinhart’s New Film
By Arya Roshanian
Get Even More From Bustle — Sign Up For The Newsletter