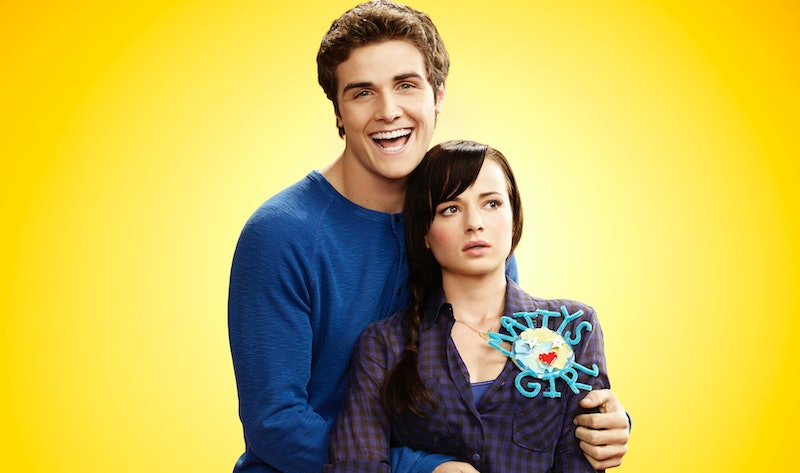 It's that time again, people. MTV's Awkward is returning for Season 4 and questions about Matty and Jenna appear to be in the air. Last season, Jenna decided that she was happy on her own (a "you go, girl" moment if there ever was one), but this is a melodramatic comedy about high school, so of course this season can't go down with the out the big romantic question mark looming over everything. So, where do Matty and Jenna stand in Season 4?

Well, as the Season 4 trailer showed us, these two are headed for a friends with benefits situation for now. Naturally, however, that doesn't appear to be enough for Jenna and memories of being Matty's shameful secret in Season 1 start to creep back in. From there, guest star Evan Williams (yes, he shares a name with cheap bourbon, but no, he is not related to said cheap bourbon's creator) shows up as college guy Luke, the less sleazy answer to last year's "more adult" romantic option, Collin. We're guessing, since the show has always had Matty and Jenna as its center, our heroine will be sandwiched smack dab in the middle of another love triangle.

In fact, when the showrunners spoke to TVLine, they confirmed just that. "It’s very easy to make a grand declaration about who you want to be, but it’s very hard to actually implement that," said Mike Chessler, adding that Matty and Jenna's fate will always be a question for viewers. But in the year that Jenna is supposed to discover college, would it be so bad to let the girl lay off the boy drama for a second?

Of course, that's not to say allowing her to explore the idea of sexual interaction without attachment is a terrible idea, but perhaps having her take on that new territory with her longtime love probably isn't the greatest idea: it's just prime for a messy situation. I'm all about young women understanding their sexual freedom and detaching themselves from the double standards that often come with it, but doing said experimentation with Matty is a surefire disaster.

And that's before Jenna even gets to Luke, who we saw kissing her in the trailer for Season 4. We get that this is a teen drama and teens thrive on romantic issues, but for once, can't Awkward — the show that dared to be a little different — dictate a stronger change? Even Gilmore Girls' transition from high school to college couldn't manage to get out out from under the Dean/Jess (and later Logan) drama until the final episode, but here's Awkward, primed and ready to put a stake in the ground for young womankind and really give us a dose of great campy drama that doesn't involve a guy, and yet, we're looking at a double dose of teen show hunks once more.

Sure, it makes for far more titularly relevant situations, but the jury's out on whether or not it's actually good for our once fearless heroine.