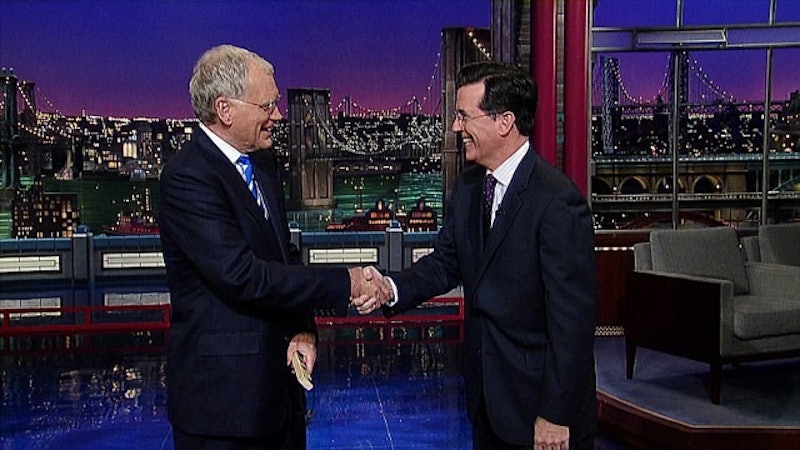 Psst...it's starting. The torch-handing has begun. Stephen Colbert, heir to The Late Show with David Letterman empire over on CBS, will be heading to the Ed Sullivan theater one more time as a guest before his takeover in 2015. That's right: he's going to square off against David Letterman on Letterman's home turf and it's all going to be on our screens very soon. April 22nd, in fact. Hey wait a second: that's next Tuesday!

It makes sense that Colbert's first interview since the announcement of his impending takeover of the house that Dave built, would be with Letterman himself. Colbert has always been a man of deference, and his admiration for the late night icon knows no bounds. It seems only fair that he would make his first non- Colbert Report -Colbert appearance on the show he's set to make his own when retirement rears catches up with Letterman's reality. It's also likely safe to assume that the duo will end up talking about the upcoming switcheroo, likely with great candor and more than a few diggy, witty jabs for good measure. After all, Colbert did recently joke on his Comedy Central show that he doesn't envy the man taking over, so, y'know — we're sure they'll have plenty to talk about.

More like this
David Tennant Will Have A New Villain To Battle In His 'Doctor Who' Return
By Frances Stewart
John Mulaney & Olivia Munn's Relationship Timeline Features The Comedian's First Father's Day
By Jordyn Tilchen
'The Undeclared War' Took Inspiration From This Gavin & Stacey Location
By Maxine Harrison
Here’s How Lizzo Is Supporting Abortion Rights After The Roe v. Wade Reversal
By Brad Witter
Get Even More From Bustle — Sign Up For The Newsletter