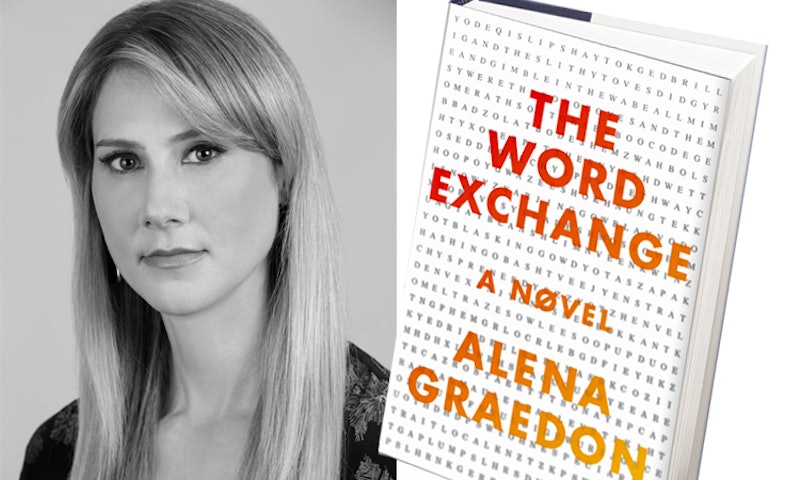 There are lots of things we take for granted — things like walking and breathing and, of course, talking. In Alena Graedon’s debut The Word Exchange (Doubleday), talking — and the existence of communication itself — is at stake in a dystopian not-too-distant future: a “word flu” threatens to wipe out the population and fundamentally destroy language as we know it.

Set in New York, The Word Exchange paints a world in which citizens are reliant entirely on smartphones-on-speed called “Memes” — they’re ordering up auto-piloted taxis, doling out details on women of interest, and doing all the things you've wished your smartphone would do in moments of desperation. Memes also have an app called the Word Exchange, which allows you to look up definitions of unknown words for a fee — an ease that’s allowed people to become lazy with language, and even more dependent on the device. This is the dependence that allows the spread of the word flu: an aphasia that prevents people from forming coherent sentences and, eventually, can kill them.

Twentysomething Anana Johnson, the book’s protagonist, works at the NADEL — the North American Dictionary of the English Language — at which her father, Douglas, is the editor. When The Word Exchange begins, just before the third and final publication of the Dictionary’s printed edition, Doug disappears, leaving behind a cryptic message. Frantic, Ana tries to place together clues to locate her father, but along the way uncovers a conspiracy wherein a group is trying to destroy language. Around her, the population is becoming infected with the word flu, leaving them aphasic, unable to speak.

Among the many tensions Gradeon creates, there are two distinct divisions in the novel: those who have word flu, and those who don’t. Then there’s the old school versus the new — readers of print versus users of tech. Essentially, they’re one in the same, as those who use Memes are the ones who are infected. Ana is torn right down the center; she’s often fighting both interacting with those who have word flu and resisting using technology to stay healthy and loyal to her father, the ultimate written word purist. Ana’s struggle seems representational of the modern-day friction many of us experience between feeling some obligation to show allegiance to print, yet still desiring the convenience and social acceptance of using modern technology. As readers, we’re often caught in the middle with her.

The Word Exchange is indeed a literary thriller — the book is nervous through and through. It's a tense read finding out what those behind the Word Exchange are up to, or what the word flu has done to communication around the country, or, most importantly, seeing how it manifests in Gradeon’s prose. A substantial portion of the book is written in the voices of characters afflicted with the flu. Here, Bart, one of Ana’s closest friends and coworkers at the Dictionary writes in a journal entry:

(Everyone’s been acting really gwosh lately—avoiding me. Maybe that sounds paranoid. But even Ana won’t return my calls—dazh last night and today, after all that’s happened—and it’s making me feel kind of crazy. I mean, I guess I’ve been slipping a bit, with language. And I’ve felt a little vyalo, mentally. But clearly if at one point I was infected with the virus—or, I mean, my Meme was—I’ve recovered. I think it must be like the real flu, with people who are immune, other who get sick but ooloochbu, and then those like Johnny. Who get worse.)

Unsurprisingly, Gradeon’s own language is essential to the success of The Word Exchange — it’s erudite, ruminative, and complex. Even if, at times, her themes are a bit heavy-handed and somewhat self-serving for a novelist — beware diving too deep into the digital wave and read, read, read (though, hey, who can blame her; I’ve got stake in her camp, too) — Graedon proves skilled with words, flexing her pen-wielding muscle consistently on each page.

An ambitious debut, The Word Exchange is a cautionary tale with sophistication. "Words, I've come to learn, are pulleys through time," Gradeon writes as the book opens. "Portals into other minds. Without words, what remains? Indeciperable customs. Strange rites. Blighted hearts. Without words, we're history's orphans. Our lives and thoughts erased."

A word to the wise, though: You just might feel a little weird reading this one on anything besides paper. Trust me.