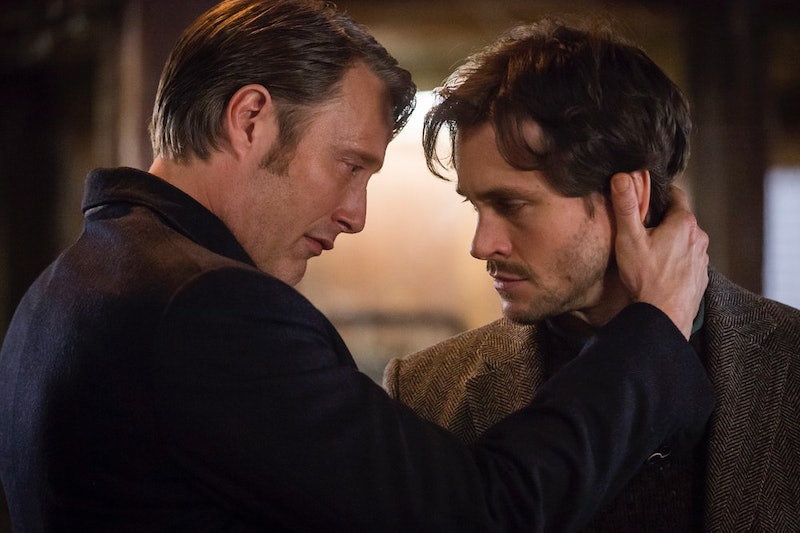 For my money, NBC and Bryan Singer's Hannibal is one of the best shows on television. And Season 2 has been ridiculously addicting. From the surprising deaths (RIP Beverly) to the intriguing plot twists to the haunting yet somehow beautiful murders, it's no wonder people can't stop singing this show's praises. But what has me the most intrigued is that brutal fight scene from between Hannibal Lector and Jack Crawford in the Season 2 premiere. Clearly Jack finds out that Hannibal is the Chesapeake Ripper, but how on Earth does Jack discover this fact?

More than any other character on pretty much any other show on television, Hannibal is the most calculating, careful and creative. He's created elaborate crime scenes without leaving a shred of evidence, he somehow got Miriam Lass to not point the finger at him when she was trying to remember the identity of her captor, and he has successfully seduced a fellow psychologist to not only believe he could never commit any crimes but also to slowly fall in love with him. The only major thing that could stand in his way is Will Graham, and yet he has freed Will from any charges of murder brought against him. Perhaps the tables are finally starting to turn because based on that fight scene, Jack has no doubt in his mind that Hannibal is a monster. Let's come up with some possible ways for Jack to discover Hannibal's secret, shall we?

The real question is what makes Jack so angry in that epic fight from the season premiere that he goes to Hannibal's home with the intention of killing him rather than arresting him? Something terrible must have happened, right? It's possible that Hannibal hurts Will in some way and Jack finds out. Consider this official synopsis of the tenth episode, where Hannibal and Will embark on a new stage in their relationship that may become to dangerous for Will to handle:

"A disturbing partnership emerges as Hannibal Lecter assists Will Graham through a dark transformation."

Theory 2: Will Finds Evidence Against Hannibal Secretly During Therapy

Or possibly, I'm reading too much into the future and Jack is just upset that he's had the Ripper under his nose this whole time and feeding him human filet mignon. Pretty sure that would make anyone angry.

As hinted by the promo for tonight's episode, it seems as though Jack is starting to open his mind to the possibility that Hannibal is the Ripper. And it seems as though he's in cahoots with Will. It could be possible that while Will restarts his therapy sessions with Hannibal, he collects evidence that somehow open Jack's eyes all the way. Perhaps they find the bullet that Beverly tried to shoot at Hannibal but missed and hit the floorboards of his dining room. Now because Hannibal is extremely careful, there's no way he'd leave a giant piece of evidence for Will to find. It's not like Hannibal will keep a marinating foot out on the kitchen counter for all to see. But Will is the expert sleuth and is starting to remember hidden memories from his old therapy sessions, so it is very possible he will come to know where the bodies are buried, literally and figuratively.

To all Boardwalk Empire fans, it's time to rejoice: Michael Pitt is coming back to television. He will show up in Hannibal's tenth episode this season as Mason Verger who, in the books, eventually becomes a horribly sadistic pedophile that swears revenge on Hannibal after getting disfigured during a therapy session gone wrong. His involvement with Hannibal is described as a "cat and mouse game". It's very possible Mason causes Hannibal to slip up during his therapy session or even possibly during a kill which could then lead Jack, Will and the FBI to some pretty damning evidence. Or perhaps Will and Mason team up and mess with Hannibal during sessions and even outside the walls of his office, shaking his concentration and causing him to make a misstep.

At the end of last week's episode, we were all left with quite a shock when Miriam Lass shot Dr. Frederick Chilton in the face after thinking he was the one who kidnapped her. Now we're all waiting on baited breath to see if the creepy yet ultimately non-serial killer-y doctor is still alive (after all people can survive a gunshot to the cheek, ahem, Fight Club anyone?). But what if Miriam realizes her mistake? Now how she would do that is a good question, she's already tried to recall her memories with the help of Hannibal and Jack, but it's possible that somehow Hannibal brainwashed Miriam into thinking Chilton was the Ripper. It's not so far-fetched when you think of all the planning Hannibal has done to cover up so many of his murders.

There's a pretty strange theory circulating the Internet at the moment and while this seems a bit too difficult to believe even to me, it had to be stated. The theory is that when Beverly Katz found Hannibal's kill room before she died, she stumbled across the still alive body of Abigail Hobbs. We still have never seen Abigail dead on the autopsy table at the FBI so it stands to reason that she could still be alive. I mean, Miriam Lass is and that was a bit surprising. It's entirely plausible that Jack, or more likely Will, discovers Abigail somehow. Perhaps after Beverly able to find the kill room so quickly, Hannibal decides to move his operation to a new location?

Oh, how I wish this would happen. I desperately want Alana to realize that her new lover is a serial killer, but I don't want her life to be in jeopardy when she makes this discovery. That would mean the last female series regular on the show would die, I don't need to be watching a show with just a bunch of serial killer-y testosterone. It would make a lot of sense for Alana to be the one who finds Hannibal out since he is finally allowing himself to be both physically and emotionally intimate with her. If there was ever a time to screw and a person to screw up around, it's Alana. Plus, her change of heart towards Hannibal would be a huge step in the guilty direction in Jack's eyes since she's been so adamantly against this theory for so long.

Doctor-patient-confidentiality maybe shouldn't apply when your patient is a mass murderer who sautés and eats his victims.