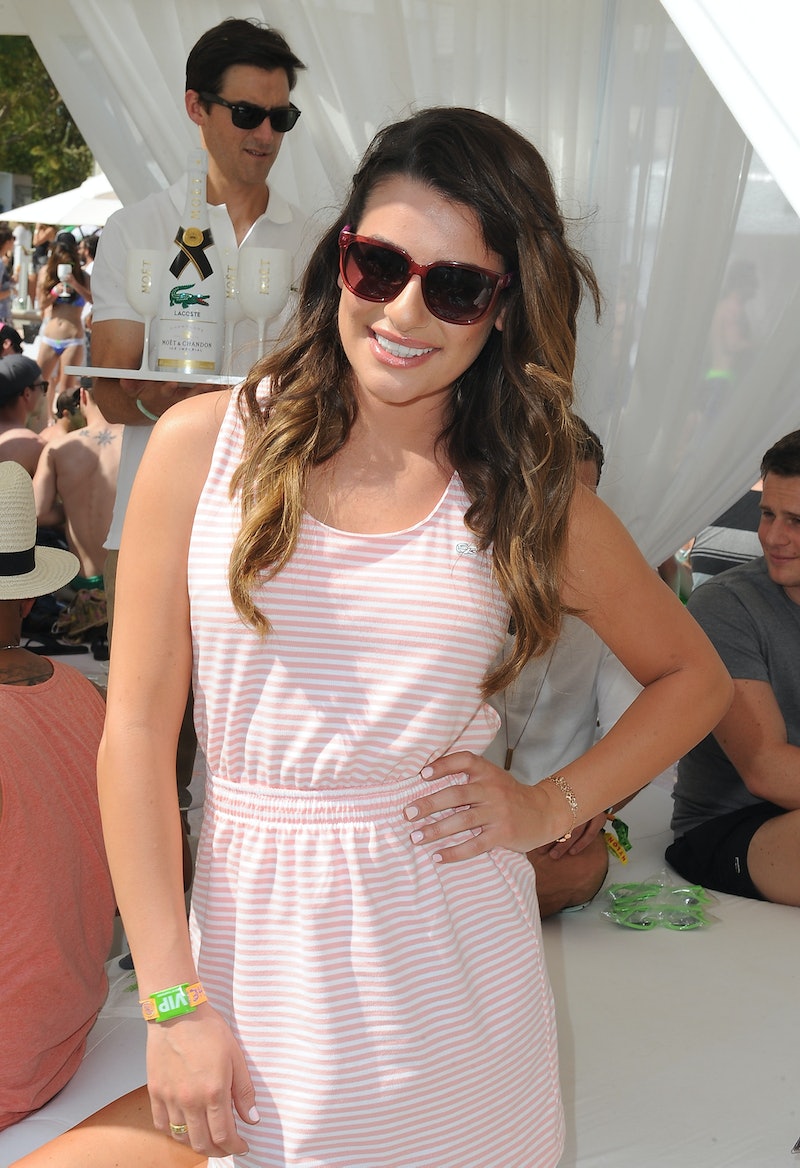 All aboard the melodramatic headline train! What ever happened to tactfulness and sensitivity? Yesterday, heading into the California desert, Lea Michele shot a music video for On My Way , her second single off of her debut album Louder. In what was supposed to be a fun and flirty video component to an already upbeat and awesome (If I do say so myself) song, Michele appears in tropical attire and an apparently "scandalous" one piece bathing suit (for real, is this 1950?). Of course, in Michele's first real "sexy" project since her beau's death, people are inevitably hyper aware of goings on and it's pretty damn ridiculous.

First off, let's acknowledge the fact that a twenty-seven year old woman is making headlines for wearing clothes. She must have forgotten her signed letter of permission from the man of the house before she left along with her frock embroidered with the scarlet lettered "A." Let's get real here, people. Yes, she wore an outfit. Yes, it was sorta revealing. Yes, she looked hot. (Work it, Lea!) No, this should NOT be a big deal. The dilemma here is that her costume (yes, this is a shoot and she is an actress) is causing this amount of talk. Michele for all intents and purposes is absolutely vanilla when it comes to scandal (save for the few diva rumors). She's a self professed "oatmeal" celebrity and now the media is just aching to find something detracting to her stellar image. You'd think that after the year she's had and with the exemplary way in which she handled herself, that it would cause the paparazzi and media hounds to lay off but no, that only eggs them on further. Nothing more frustrating than a strong, self-assured woman, right?

In addition to the rumblings about her get up, there was also mention of her "canoodling" with her male co-star and romantic interest in the music video. Again, it's certainly worth mentioning since no one can differentiate between real life and fiction, that she's an actress and she's doing that pesky thing called acting. It's. Not. Real. And you know what? Even if she did grind on some super decent dude in the middle of the desert wearing high waisted shorts and an adorable pink tank top, I don't think that warrants a public stoning. But then again, maybe that's just me.

It's time we stop obsessing over every minute detail about women in the industry and women in general. Michele more than ever has been under the microscope, scrutinized for every smile, frown, or indifferent look she makes whether she's shopping at Whole Foods or going for a walk with her friends. It's obsessive, crazy, and unfair. Eventually, someone is going to do something that is deemed uncouth, or displeasing, and yes, maybe they'll even experience a wardrobe malfunction (the horror!). That's just life and we need to give women the room to live it.

In the words of Chris Crocker, LEAVE LEA ALONE!