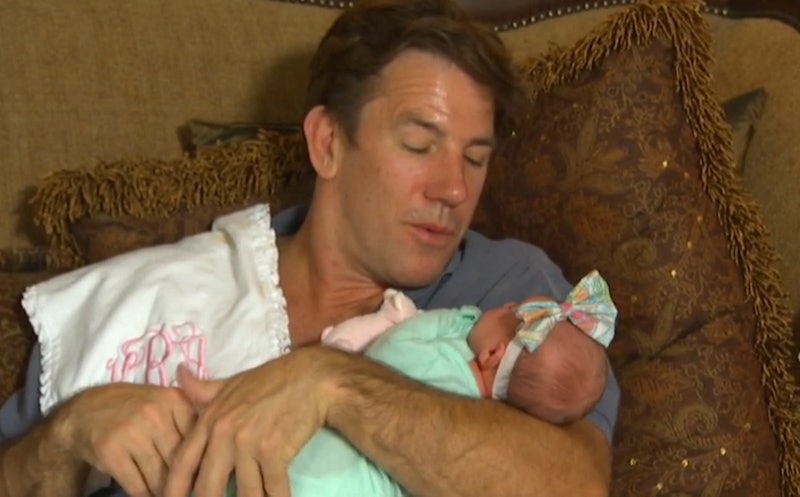 Before we could bat a false eyelash, Southern Charm Season 1 took its final bow. Monday night, the first season of the Bravo reality series reached its conclusion, and the ep was a veritable polo match-themed roller coaster. Shoes were tossed into a tree, Cameran Eubanks hit us with gemstones masquerading as quotes (“Hey, turds. Wake up” was a personal favorite of mine), and Patricia Altschul mocked her son's naugahyde couches (“To quote Bette Davis, what a dump”). But the true focus of the episode: Thomas Ravenel and Kathryn Dennis’s relationship. We know where they stand at the moment (they’re in love! They have a baby! They’ll probably get married!), but how did things play out on the show? Um, SO INTENSELY.

As we loyal viewers saw, the first seven episodes of the season/the first month of their relationship was all things dramatic (a love quadrangle, a pregnancy scare, a pair of fake eyelashes, many polo shirts) for the couple. But don't you worry your noggin, the final ep didn't switch up the vibe. As a matter of fact, the ep upped the drama dose. So much went down between T-Rav and Kathryn in just one hour! Here's a rundown of the ep's KatRav events (and my reactions, natch):

It seemed like the last of T-Rav and Kathryn, the nail in the KatRav coffin. We loyal viewers knew better! This is the end of the season, we thought. The end of KatRav it is not.

But that wasn't the end of the season. Just as this loyal viewer was about to turn off the TV, the show hit its audience with an adorable Kensington SC cameo:

Bye, Southern Charm. Don't be a stranger, ya hear?