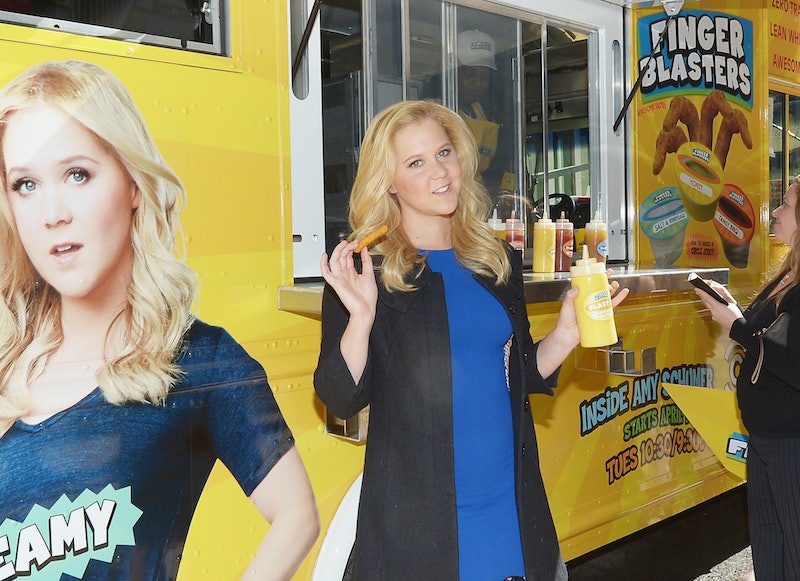 As you already know, Amy Schumer is a comedy goddess. While Jerry Lewis might have a problem with Schumer's ribald no-nonsense take on things like HPV and Plan B, we're absolutely in love with her Comedy Central sketch show Inside Amy Schumer . Season 2 has only just begun and we've already got some insta-classic clips littered across the web. It's no small task for Schumer to be leading the pack in terms of the dude-centric comedy channel's programming. In a 2013 comedy roundtable, fellow funny lady Kristen Schaal alluded to Comedy Central using Schumer's show as a "test run" for future female shows, citing that if it failed, they probably wouldn't buy another lady show for a few years.

At the time of Inside Amy's debut, the channel hadn't had a female comic helmed show since Sarah Silverman Program left the air in 2010. Pitting her head-to-head against on-again-off-again beau Anthony Jeselnik's talk show, Schumer's sketch series soared while Jeselnik's bro-tailored chat half-hour tanked, (something we bet network execs were not expecting). So if you needed another reason to love her, you can thank her for paving the way for Broad City , too.

While Schumer is an incredibly talented writer, performer, and all-around kickass trailblazer, it's clear she'd also totally be the best of besties. Here, we countdown the four reasons why we're friend-crushing on everyone's favorite comedy gal pal.

SHE COULD WRITE A BETTER STUDIO 60 THAN AARON SORKIN

As evidenced by her sketch " The Food Room," Schumer is crazy adept at mimicking Sorkin's style — prestigious, swelling title music, rapid walk-and-talk, implied romantic history between leads that work great as a team — while actually being funny, (something that was missing from Sorkin's drama about funny people). We'd totally watch a series-length version of the goings on of the Food Room gang.

SHE GIVES THE BEST COMPLIMENTS

She would never let you think you look like a homeless cow.

SHE UNDERSTANDS THE IMPORTANCE OF COMFORT

Which means you know homegirl is down to just binge watch Netflix with you all day.

SHE WON'T FOOD SHAME YOU

Sure, she might not chastise you for cyber-bullying your niece, but she definitely will never make you feel bad about eating a whole wheel of cheese by yourself.

You know you need that one non-judgmental friend you can gab with about emergency contraceptives, getting super wasted, and that hookup-you'd-rather-forget. Schumes, (we can call her Schumes, right?), would totally be that sort of pal.

More like this
Mindy Kaling Explains Why 'The Office' Would Be "Inappropriate" Today
By Jake Viswanath
Kim Cattrall Had A 'Sex And The City' Reunion With Creator Darren Star
By Grace Wehniainen
Is Blake Lively Or Penn Badgley The Richest 'Gossip Girl' Star From The OG Series?
By Hugh McIntyre
17 Photos Of The 'Wednesday' Cast Vs. The 1991 'Addams Family' Cast
By Grace Wehniainen
Get Even More From Bustle — Sign Up For The Newsletter