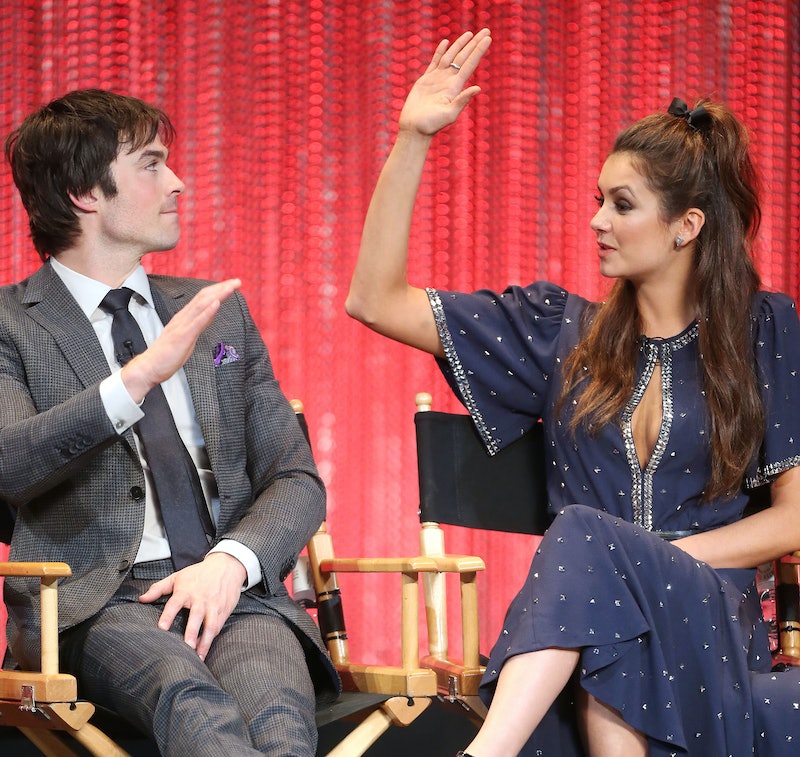 The rumor mill just keeps on churning: are Vampire Diaries stars Nina Dobrev and Ian Somerhalder dating again? Not exactly, but they don't seem to be dating anyone else either. Unfortunately for all Vampire Diaries-loving fans, Dobrev and Somerhalder seem almost as likely to get back together as the recently broken-up Elena and Damon. How do Delena and their real life counterparts keep up this on-again-off-again charade when they're so obviously destined to be together?

Last week, Somerhalder was linked to Molly Swenson, a former American Idol contestant who is now the COO of a site that links posts to philanthropic action sites, when they attended multiple events together in Los Angeles. Much like every time the Vampire Diaries' actor is linked to a new woman, we all just rolled our eyes because we're sure he and Dobrev are soulmates. But because Somerhalder serves on the advisory board for Swenson's company RYOT (along with Sophia Bush and new mom Olivia Wilde) we figured that they've probably got a decent amount in common, so maybe the actor really has moved on from his former love? Well, not so fast.

On April 21 — after getting wind of the rumors that she was dating the actor — Swenson allegedly denied the rumors on Twitter. (The supposed tweet has since been deleted.) But, according to People, the RYOT COO tweeted: ""I've been off the market for 2 yrs! <3 you @randizzie." Sorry, everyone — this girl's got a boyfriend and he his alter ego is not Damon Salvatore. So where does this leave us with Nina Dobrev's dating rumors?

In late March, Dobrev posted the below photo of Vampire Diaries costar Michael Trevino that spawned some serious relationship rumors.

The photo itself isn't really telling at all — considering it wouldn't be so random and doesn't necessarily imply romance for two longtime costars to go bowling together on a Sunday. But the Internet will be the Internet, I suppose. More or less, there seems to be little truth to the fact that Dobrev and Trevino are anything more than friends, but a quick Google search of who the actress is dating, pulls up a legion of articles claiming that the costars are sleeping together to claims that Dobrev dumped him because she was so jealous of Somerhalder and Swenson. (There are also posts claiming that Dobrev and Somerhalder hooked up at Coachella — so, make of that what you will.)

And so, here we are again — attempting to figure out whether or not this pair is moving on or just on the long road to the endgame. Clearly they've spent a lot of time on The Vampire Diaries because we're starting to feel the exact same way about them as we do about Elena and Damon: JUST GET BACK TOGETHER AND GET IT OVER WITH ALREADY.