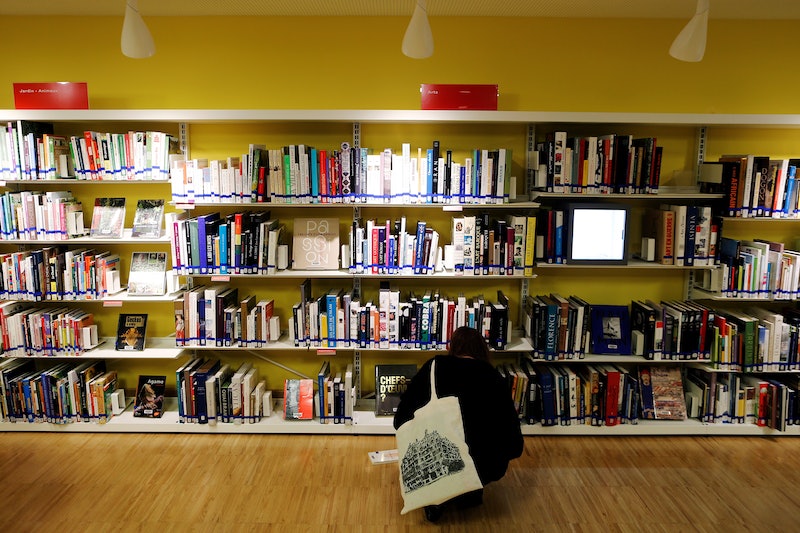 Apparently, libraries provide patrons with a happiness that money can’t buy. Or at least nothing less than almost two grand in cash. According to a recent study commissioned by the U.K.'s Department for Culture, Media, and Sport, the act of going to the library induces joy equivalent to that brought on by a £1,359 ($1,878) pay raise.

The study was conducted in an attempt to measure which activities have the most positive impact on an individual's wellbeing. Visiting a library scored among the top joy-generating activities, alongside dancing and swimming, giving us yet another reason to hang-out at our local library.

For all of us civic-minded literature lovers out there who’ve been crusading to save our dwindling number of libraries, this isn’t new news. Of course libraries bring great happiness to their pursuers! How couldn’t being surrounded by endless walls of books that you can read for free fill someone with joy? But this survey quantifies that happiness (if happiness is indeed quantifiable), spinning all that positive energy emitted by frequent library goers into analyzable data.

And this U.K. study adds even more to the proof already stacking up on the value of libraries, a value that was evidenced extensively in a Pew Research Study released last month. The rather pleasing results of this eye-opening Pew study showed that habitual library goers maintain stronger community ties, are more likely to socialize with friends and neighbors, and exhibit higher levels of technological engagement, in part thanks to master researcher librarians who are always around to help and pass along their wizardly skills.

Yet despite all this empirical evidence that suggests libraries are an invaluable cultural resource, the U.K. government continues to enact policies and budget cuts that have, since last year, resulted in an estimated 493 library being closed, passed on to volunteers, or facing an impending threat of closure around the country. Like the U.K., the U.S., too, has seen its number of public libraries dwindle over recent years, and many continue to face extensive budget cuts. Despite the economic strain, our libraries continue chugging along, though, striving to serve their growing number of users and devotees.

Clearly libraries are awesome—why else are elderly people leaving their fortunes to them? They give people access to a robust expanse of knowledge, serving a variety of educational needs, at little to no cost, they serve as engaging community centers, they enhance users social and technological skills, and they make people happier—and more should be done to keep them alive and thriving.

Hopefully the happiness study and others like it will help encourage their preservation. In the meantime, if you're ever turned down for a raise, head to the library. You'll get a jolt of joy that's at least as valuable as that extra cash would've been.

More like this
The Viral 'Little Miss' Franchise Is Focusing On Mental Health Next
By Darshita Goyal
Josh Peck Shows Love To Jennette McCurdy After Her Shocking 'iCarly' Revelations
By Radhika Menon
We’ve All Had Bad Sex. Nona Willis Aronowitz Is Talking About It.
By Sophia Benoit
Emma Mackey *Is* Emily Brontë In The First Trailer Of The Biopic
By L'Oréal Blackett and Sam Ramsden
Get Even More From Bustle — Sign Up For The Newsletter