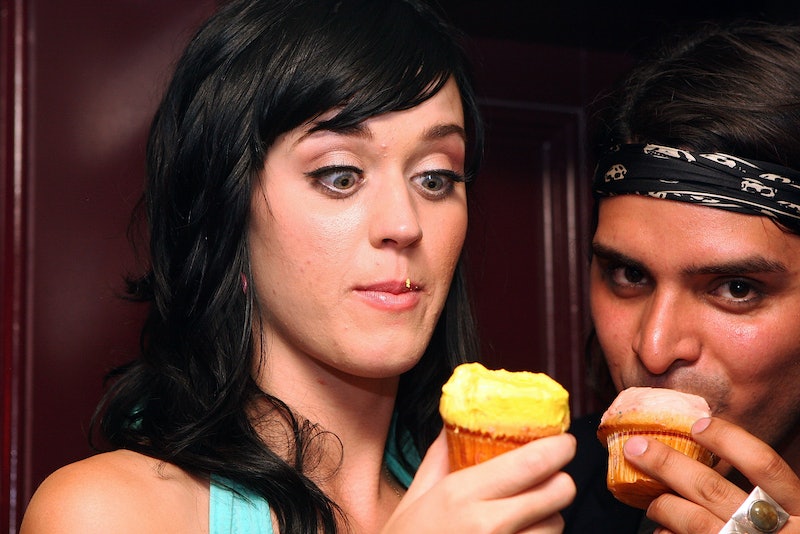 The music video for Katy Perry's "Birthday" has been the subject of a lot of interest, especially in the wake of Perry's "Birthday" lyric video. You know, the one that's impossible to watch without getting immediately hungry and/or diabetic? It's also been subject to a lot of dread ever since Perry's "Birthday" trailer featured a Jewish stereotype as one of the many characters she would be adopting in her self-played gang of World's Worst Birthday Entertainers. The "Birthday" music video debuted on Thursday and it's better or worse than we feared. Better because it is objectively a very good music video. Worse because it would be close to perfect if not for the cultural appropriation.

Perry appears as Goldie the Dancer, Yosef Shulem the MC, Kriss the Clown, Ace the Animal Trainer, and Princess Mandee (the face painter). After re-introducing them for the people who didn't watch the trailer, the music video starts in full, showing each of the characters at different birthday parties. The character of Yosef Shulem was, of course, created to attend a bar mitzvah and it's clear that Perry was aiming for something with him. Bar mitzvahs are Jewish coming-of-age ceremonies, which, as far as the song is concerned, is basically just one big birthday party. Perry might have been trying to be inclusive by showing more than one kind of party, but Yosef Shulem instead just makes those scenes stand out as "other".

Yosef Shulem is the only character in the Perry gang of a particular ethnic background (something for which, really, I'm profoundly grateful). Why Perry had to go "undercover" as a Jewish person in order to be the MC at the bar mitzvah is unclear. It could just as easily have been done by Princess Mandee for how necessary it felt to the overall composition of the video. The bar mitzvah scene was a great inclusion, but the World's Worst Birthday Entertainer that she disguised herself as was just awkward and kind of offensive.

If Yosef Shulem was removed and replaced with a less culturally insensitive character, the video would have been an ambitious work on par with One Direction's "Best Song Ever" or Kanye West's "Runaway". Well, all right, maybe not on par with "Runaway". That was basically a short film with a song attached. Perry shined as Goldie the Dancer, who accidentally knocks off an elderly customer's leg at the party and tries to cover it by playing air guitar with it. She shined as Kriss the Clown, who nearly ran out in front of a car trying to find and break a piñata, forcing one of the children from the party to run up and save her. She shined at the end when she revealed herself to all the children and they started freaking out that Katy Perry was at their birthday party.

The video as a whole was very light-hearted and hilarious, which made Yosef Shulem's scenes all the more jarring because of how uncomfortable they were. Since ignoring him is impossible, just focus on how much fun everyone else seems to be having at the bar mitzvah. That almost makes it a little better. Almost.