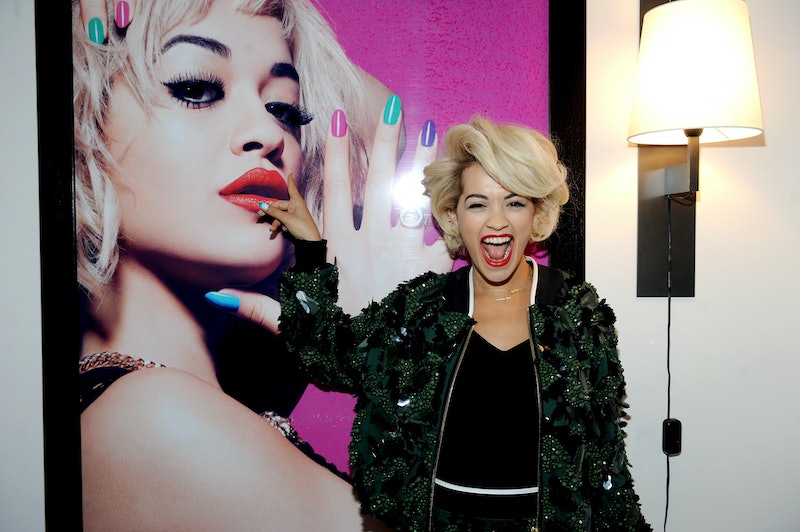 Has Rita Ora ever had an affair with Jay Z? If that's a question you've never thought of asking, then you're on Ora's good side. Jay Z is Beyoncé's man, after all, and they have a beautiful, oddly-named child together. Beyoncé and Jay Z might even be going on tour together later this year. How does Rita Ora even fit into that equation? If she's going to be illicitly connected to anyone, it should be Zac Efron considering Ora ripped his clothes off at the MTV Movie Awards. Maybe that's why Ora snapped at Power 105.1 for asking about her affair with Jay Z — except that instead of defending herself, Ora just said the entire subject was disrespectful to Beyoncé.

She's right, of course. Beyoncé is busy being TIME magazine's Most Influential Person so the last thing she has time for is to be embroiled in a love triangle. Those things might be cute in television, movies, and books (unless you're as incredibly sick of them as I am), but they're not so cool in real life. However, the fact that Ora chose to slam the rumors by pointing out that Queen Bey wouldn't want to hear about it is a bit suspect. When asked by Power 105.1's Breakfast Club about whether rumors about their relationship had any truth to them, Ora fired back with:

Don’t you dare disrespect Beyoncé like that ever again in your entire life. You should know better than that. That’s just straight up disrespect. You can’t even go there. That’s like not even a question.

On the one hand, it's not the first time that Ora has had to deal with rumors of that type. Back in early 2013, Holly Hagan tweeted that Ora was allegedly sleeping with Jay Z and Ora fired back with profanity-laced tweets of her own that have since been deleted: "I stayed silent on one bullshit rumour but this one I have to speak... that was just f***ing ridiculous." Having to hear that a rumor is still following you a year and a half later is understandably frustrating and there are only so many times you can fly off the handle about it.

On the other hand, Ora didn't actually deny the allegation. In fact, she was sort of smiling as she spoke, which either said that she found it too ridiculous to even get upset about anymore or that she was joking around. Somewhere, Queen Bey is counting her millions and appreciating Ora having her back, but Ora is giving more weight to the rumor than she actually meant to. Has Rita Ora ever had an affair with Jay Z? The answer is probably no and Ora is right about at least one thing: talking about it is disrespectful to Beyoncé.