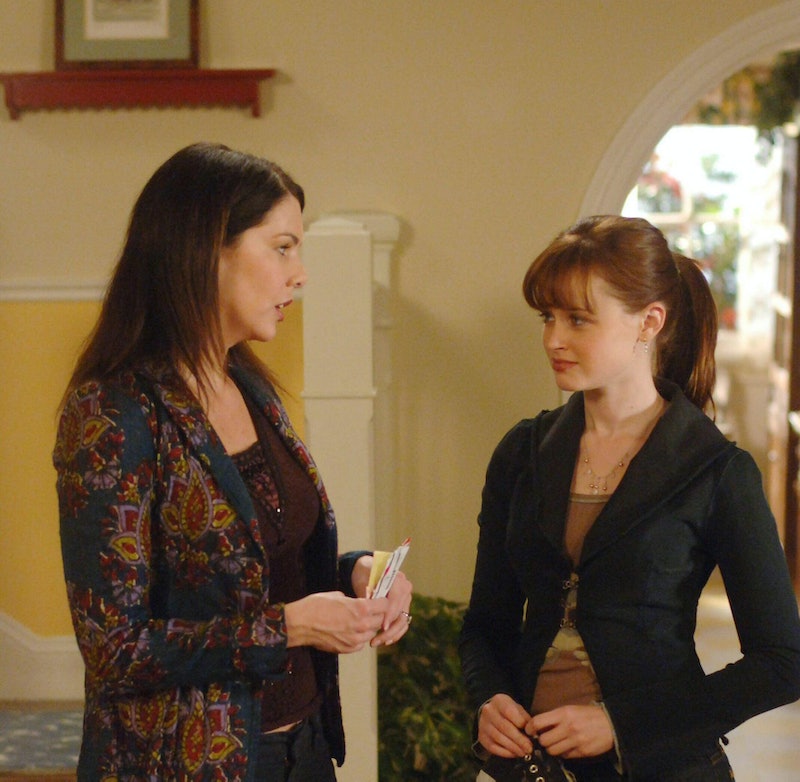 It is hard to believe that this Thursday marked seven years since Gilmore Girls aired its final episode. (And yes, we're still in mourning.) The show, though never a huge ratings hit, still has a devoted following — and rightly so. Gilmore Girls depicted some of the most dynamic female characters we have ever seen on television.

Created by Roseanne writer alum Amy Sherman-Palladino, Gilmore Girls presented the world with a relationship television hadn't seen before: a mother and a teenage daughter who actually got along. And not in the simplistic way Carol and Marcia Brady got along — these were serious, dynamic best friends who were smart as hell, addicted to caffeine, stubborn (which made for an epic fight in the sixth season as we all know), and could outtalk anyone. (Seriously, while scripts for most TV shows of that length are 40 – 50 pages long, Gilmore Girls scripts were known to hit 80 pages.)

Throw in-waspy-but-hilarious parents, a smoking hot diner owner to provide seasons of sexual tension, a bunch of eccentric townies, and voila! You've got yourself a show worth obsessing over.

If you wish Stars Hollow was real, would eat Chinese food from a pancake house, have a dog named Paul Anka, (and light a candle everyday in hopes of a Gilmore Girls movie), then you just may be a fellow diehard. Here's how you know you're a true GiImore Girls superfan.

when you visit small towns, you're disappointed if everyone doesn't know each other

(And if there aren't events involving baskets.)

(Probably best to hit play and listen while you read the rest of this.)

and that Adam Brody was adorable long before The O.C.

You freaked out when you saw Francie Jarvis on Shameless

And when Paris Gellar, Lane Kim, and Mitchum Huntzberger all appeared on Scandal

Most of us have a great friend that kinda annoys us all the time.

"Remind me to tell you about the time when my Mom wore a rhinestone penis on her shirt and my Grandma towed her car"...

Is always a good ice-breaker.

no, But, seriously, you love coffee

You've said thank you when someone kissed you

though this is pretty much your relationship mantra

But we all know Jess was the sexy one

That kiss was hot.

until Logan threw everyone a major curveball

And, oh, Max. Maaaax Medina. He can teach us English anytime.

oh, and Christopher was a total DILF

You watch Parenthood just because Lorelai Gilmore is on it

And Gypsy. Don't forget about Gypsy!

And then they went and got together in real life.

Oh! And remember that time Lorelai went on a date with Jon Hamm?!

You desperately wish your town had a dance-a-thon

you'd pick emily to have your back in any bar fight

That woman can put anyone in their place.

You're still mad about Season 7. Why did you leave us Amy?

just because it was close enough to get your fix

no Starbucks barista will ever fill your Luke Danes void

Despite your attempts at witty banter.

even though you have every season on DVD

and most of all, you know this much is true...

More like this
Who Is Murray Bartlett Dating? 'The Last Of Us' Star Is Extremely Private
By Alyssa Lapid
Ashton Kutcher Wants Danny Masterson “To Be Found Innocent” In Rape Retrial
By Jake Viswanath
The Banned 'Friends' Ad Shows Monica As You’ve Never Seen Her Before
By Sam Ramsden
This 'Gossip Girl' Wardrobe Error Has Gone Viral On TikTok
By Alyssa Lapid
Get Even More From Bustle — Sign Up For The Newsletter
From hair trends to relationship advice, our daily newsletter has everything you need to sound like a person who’s on TikTok, even if you aren’t.