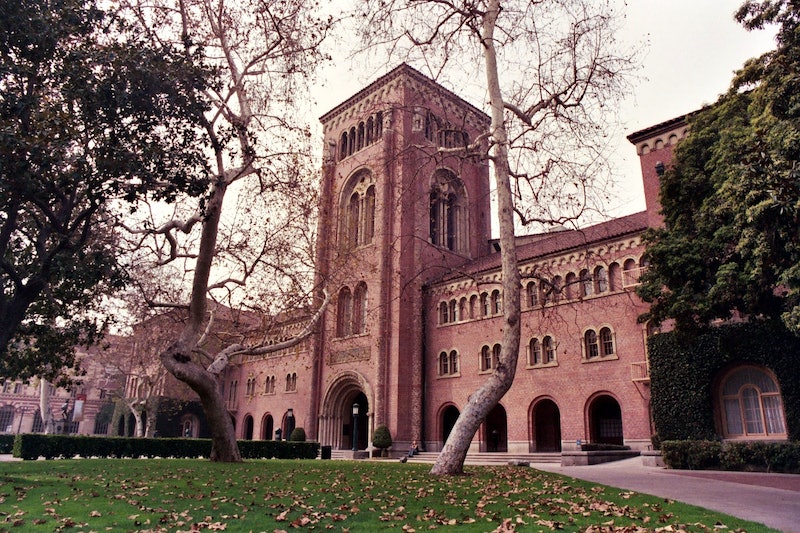 Let's face it: USC is the greatest college in the history of the universe, and yes, that is an undisputed FACT. The traditions! The city! The fountain run! There are so many things to love about going to a college that's minutes from the beach (pick a beach, any beach), Downtown LA, and pretty much anything else you'd ever want to do in this city. You could almost say there's too much to love. Almost.

But the best thing by far about going to USC is that most of us Trojans are pretty damn happy to be here. After all, it's hard not to get excited when everyone at 'SC is just so very, very good-looking.

USC may have earned itself a pretty solid reputation as a party school, but there's so much more to being an 'SC student than frat parties and roof sex. The Trojan Family isn't a cult — it's a very real connection you have to other students and alumni (who understand what I mean when I say ROOF SEX). 'SC has its own set of weird rituals and traditions that you can only really understand if you've spent time inside the "USC Bubble."

If you went to USC — or are lucky enough to be here now — you know what I'm talking about. There are some things only we in the Trojan Family can truly understand.

you've called this guy your boyfriend

Oh, Tommy Trojan. I mean, come on. The dude obviously works out.

and that THESE AREN'T CHEERLEADERS

They're the World Famous Song Girls.

HOW YOU FEEL ABOUT ANYONE WHO ACTUALLY GOES TO CLASS WHEN IT'S RAINING:

THIS ISN'T JUST A LIBRARY to you

It's a bottomless pit of unending despair without any cell service.

you've gone to STARBUCKS DURING YOUR FRIDAY MORNING WALK OF SHAME

It's ok, we feel your pain.

you know WE DON'T JUST HAVE "ALUMNI"

We have famous alumni...

did we mention this guy?

WHEN YOU'RE THE ONLY ONE OF YOUR FRIENDS WHO HAS CLASS ON FRIDAY MORNINGS:

WALKING OUT OF YOUR FINAL FOR THAT CATEGORY III GE YOU TOOK PASS/FAIL:

you know THIS ISN'T JUST A PARTY

It's a registered party.

...and you have no regrets. Ok, you have some regrets.

YOU DON'T TRUST THE LAPD

WHEN YOU GRADUATE AND TRY TO DATE SOMEONE WHO DIDN'T GO TO 'SC:

THIS ISN'T JUST A BAR to you

This is a bar where you will spend an embarrassing amount of time standing in line and complaining about the overpriced drinks while creating tons of memories you will never actually remember.

TRYING TO WORK OUT AT THE LYON CENTER feels like

Hope you're cool with those "freshman fifteen" pounds, because let's be real, they're not going anywhere.

you know THIS ISN'T JUST A MARCHING BAND

This is the Grammy Award-performing USC Marching Band.

EVERY TIME YOU ATE AT EVK AS A FRESHMAN:

THIS ISN'T JUST A RIVALRY

speaking of, What's that other school, I think it's somewhere in West LA?

and most of all, this isn't just football

yes, tHIS WILL DEFINITELY BE YOU ON GRADUATION DAY