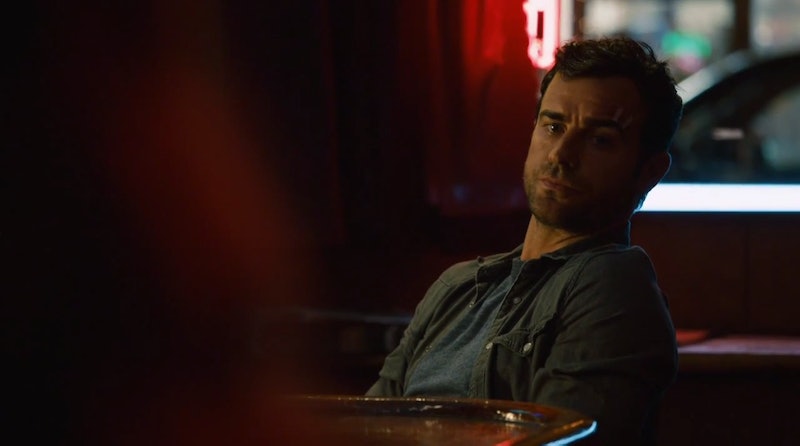 If you thought HBO's The Leftovers sounded creepy before, then prepare to spend the rest of your day completely unsettled. The extended trailer for The Leftovers takes everything that made the first trailer haunting and compelling and cranks it up to eleven. It starts with an extension of the scene of a mother who discovers her baby missing from its car seat. The child literally disappeared between one word and the next while the mother was talking to her husband. Her helpless screams are infused with the terror of a woman who literally has no idea what's going on and further fed by another child crying out for their missing father just across the way, making it clear that the events of the show don't really discriminate when it comes to devastating the people left behind.

The Leftovers is based off the 2011 novel by Tom Perrotta, following police chief Kevin Garvey, played by Mr. Jennifer Aniston himself Justin Theroux, as he attempts to keep everyone sane after the Rapture caused two percent of the world's population to disappear. The story focuses on Garvey's suburban community and the grief, anger, and confusion of the people left behind. The extended trailer shows the different ways that these people are starting to self-destruct as they come to terms with the disappearances in their own way.

And from the looks of it, that statement couldn't be any more accurate. There's an eerie cult of white-clad people protesting press conferences and stalking their neighbors. There are people trying to join their loved ones by jumping off rooftops in clear suicide attempts. There's anarchy threatening to break out. There's a lot of sex, drugs, and cursing. It's like The Walking Dead, except with a lot less zombies and a lot more religious undertones. If neighbors aren't stockpiling weapons less than half a season in, then those are the neighbors who probably won't survive to see season two.

If there's one thing to take from post-apocalyptic shows like The Leftovers or The Walking Dead, it's that the scariest thing about the end of the world as we know it is how it turns people against each other. When humanity is backed into a corner, we fight — even if that means fighting people we used to call our friends. But where The Walking Dead at least had the threat of becoming zombie chow to explain at least some of the infighting, the people in The Leftovers seem to just be ticking time bombs fueled by nothing but their own confusion and grief. It makes for the kind of fascinating study of human nature that will make The Leftovers a hit. Even if it doesn't have zombies in it.

More like this
Everything To Know About True Detective Season 4
By Brad Witter
Only Murders In The Building Introduces 4 Suspicious New Characters In Season 2
By Kadin Burnett
Where Was 'Only Murders In The Building' Filmed? The Arconia Has A Different Name IRL
By Radhika Menon
Winona Ryder’s Impact On The Set Of 'Stranger Things' Goes Beyond Just Her Acting
By Radhika Menon
Get Even More From Bustle — Sign Up For The Newsletter