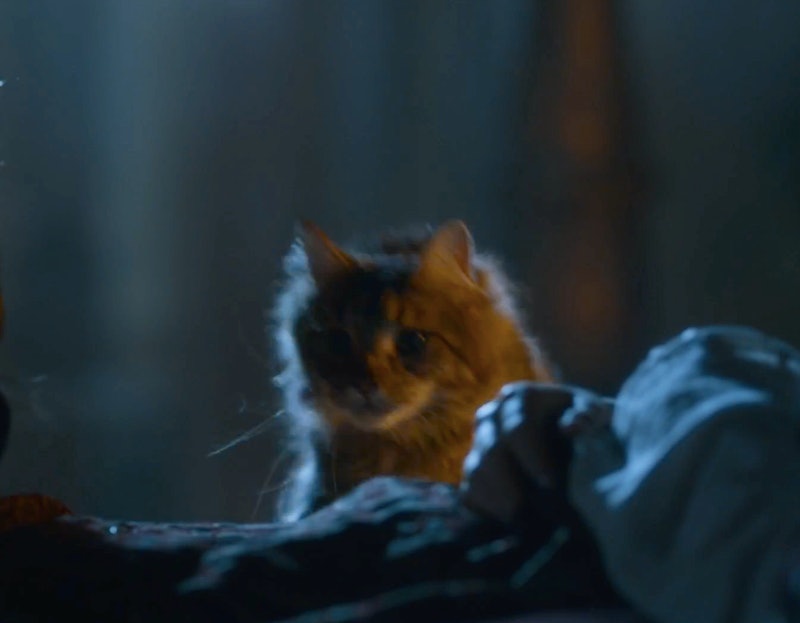 You guys — who doesn't love a cute cat on television? Literally no one except monsters (clearly), that's who. So when Ser Pounce bounced his way into our hearts on Sunday night's episode of Game of Thrones , we were instantly smitten. But not only that, the mere existence of Ser Pounce is enough to convince us that, like the Lannisters or not, Tommen will at least be a better king than his evil, no-good, super-psychopathic brother, the dead king Joffrey would've been.

Because not everyone can own a cat. But those folks who do own cats have certain traits that would prove handy to anyone ascending to a throne of royal rule, particularly a wee lad like Tommen who's surrounded by some truly terrible people. Between his motheraunt Cersei, his power-hungry grandfather Tywin, and the subtly manipulative bride-likely-to-be, Margaery, Tommen's got a lot of strong personalities to contend with. But with Ser Pounce standing fluffy sentry, we're sure the lad had potential to be just fine. Why?

Well, because cat owners — and animal lovers in general — are proven to have the capacity for many desirable traits that the brat king Joffrey ever had. I mean, no one who threatens to skin Ser Pounce for funsies is a leader we'd want to be led by. I MEAN JUST LOOK AT SER POUNCE. C'MON! He's too cute for that shit:

See what I mean? But outside of cuteness, there are more reasons that Ser Pounce is the harbinger of some kingly improvements. Like...

Cat Owners are Smarter Than Other People

It's true! Did you know that overall, cat owners are said to be more educated and intelligent than dog owners? Though, sure, there's the caveat that it's because cat owners work very long hours and need a pet that fits into that lifestyle. But that doesn't make the correlation any less true! And as we picked up during Tommen's talk with Tywin in "Breaker of Chains," Tommen already has a very thoughtful grasp on what it means to be king — and a good one at that. It's like Tommen already knew he'd need to make sure that his focus was on the throne's dealings.

According to two studies done by Dr. Nicola Taylor — titled "Empathy and Attitudes Toward Animals" and "Attitude to Animals and Empathy: Comparing Animal Protection and General Community Samples" — people who own cats are far more empathic and compassionate towards other humans. And, we don't know about you but that sounds like the greatest asset a king could have when it comes to ruling over an entire population. "There is definitely a link between human directed empathy and positive attitudes toward the treatment of animals. So if you are more animal welfare friendly, then you have more empathy toward humans ... Animals do make us more compassionate," Taylor stated.

After the seven hells Joffrey put the poor people of Westeros through, a kind, compassionate, and intelligent Lannister will do fine by us (for now).