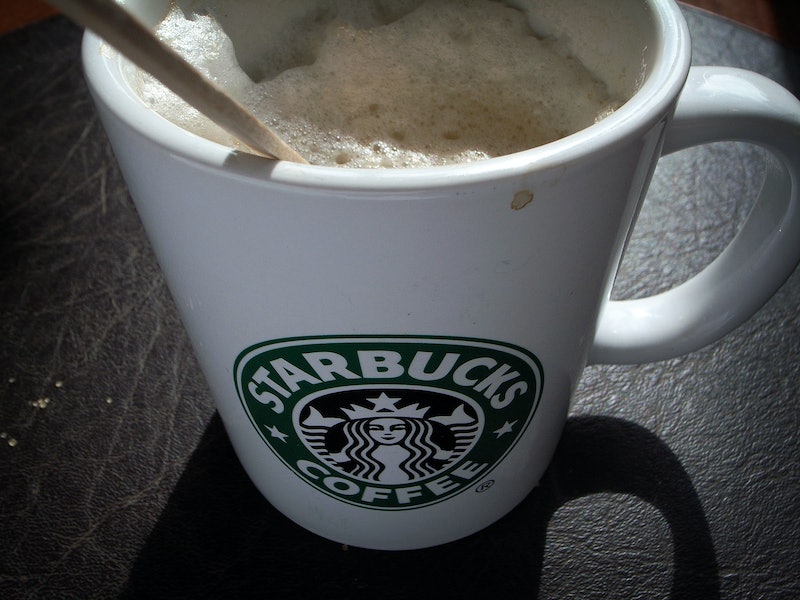 Wake up and smell the coffee. Unless the coffee comes from Starbucks, in which case we'll have to find a different scent to tickle our noses. Due to skyrocketing coffee prices, Starbucks has decided to stop buying coffee. Gasp. The silence you just heard is the sound of the world screeching to a halt as people are no longer able to get out of bed in the morning.

Starbucks, a company that is known for misspelling its patrons' names and really expensive coffee, might be facing a big problem if it has to continually sit out on buying more coffee for eager customers. But due to a 90 percent rise in arabica coffee bean prices, Starbucks is doing just that. As Craig Russell, the head of coffee at Starbucks, told The Wall Street Journal, their "strategy is stability. To have stability, you don’t chase the market.”

But with coffee prices showing no signs of slowing, it seems that Starbucks might have to start chasing the market pretty soon, which will mean that your over-priced cup of morning Joe is about to become even more expensive. And while Starbucks has said that it will try to keep prices stable, this may not be possible with the prices of milk and sugar on the rise as well.

But despite this news, Starbucks is continuing its expansion in North America, with CEO Howard Schultz saying last week that Starbucks is "significantly under-stored." Because apparently, until you're sleeping in a Starbucks, there just aren't enough in the world. This year alone, the company is planning on adding another 600 locations in North America. In New York City, where two Starbucks are often separated by less than a block, this seems a bit like overkill.

However, Starbucks is largely unfazed by the rising prices of coffee because their new gameplan seems to be food. The new expansion plan focuses on lunch and dinner options for customers who would rather go to a coffee chain than McDonalds for a quick bite to eat. As Starbucks chief financial officer Troy Alstead said to The Motley Fool , Starbucks "will increasingly be seen as a destination for a quick, delicious and high-quality lunch."

But even this idea may be ill-fated, as rises in pork prices accompany an epidemic killing millions of piglets, and dairy prices remain at an all-time high.

Given this unhappy news, it seems that Starbucks would do well to find alternative sources for its coffee beans. Unfortunately, Brazil grows about 40 percent of the world's arabica coffee beans, making it the largest coffee producer. Due to a severe drought, this year's harvest is expected to be less than ideal, causing prices to burgeon.

And it isn't just coffee. If you thought you could get your daily dosage of caffeine from other hot beverages, think again. Droughts in Asia are also threatening tea supplies, and with this year's impending El Niño bringing the potential of severe and unusual weather patterns, it seems that crops across the world might be vulnerable to nature's wrath.

So stock up while you can on your caffeine supply — who knows when you might get it again?