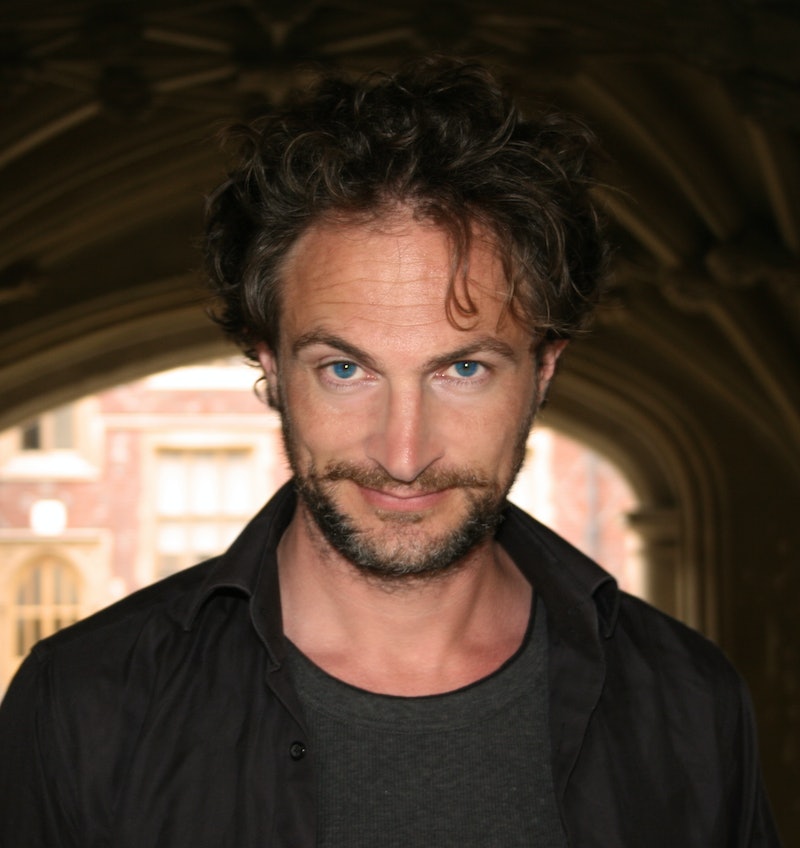 As a writer, Marcus Sedgwick is always up for a challenge. His critically acclaimed novels, children's books, and even illustrations are always tackling difficult subject matter and structures — such as with Midwinterblood , his Printz Award-winning YA novel told in seven parts with several point of views. It's no different in his latest release She Is Not Invisible (Roaring Brook). Though it's a slim book, it's a massive undertaking.

She Is Not Invisible follows a teenage girl, her younger brother, and a stuffed raven named Stan as they travel from England to New York City looking for their missing father. They encounter major hiccups along the way, some on account that Laureth, the main character, is blind.

Sedgwick talked with Bustle about this decision, his experience with coincidences, and what's hiding in the pages of his latest release.

BUSTLE: In She Is Not Invisible, Laureth talks about unrealistic pop culture portrayals of people who are blind. Did you have any concerns about being able to accurately portray the experience of someone who is blind?

MARCUS SEDGWICK: Absolutely. The idea to make Laureth blind was quite a late idea. Although this is a relatively short book, it's a book that took about seven years of planning and thinking, with a couple of false starts along the way. It was only about two years ago I thought it might be interesting to do this. I knew that was going to be a big challenge, especially because I decided to make it first-person narrative and because she's been blind since birth. If you have someone who has been able to see then they have some of those concepts of what sight means and what color means. So I knew it was going to be a challenge, but when I got into it, I realized I had those moments of, Oh, this is so much harder than I thought. Two or three times I thought, Well I can't, I can't do this.

But I got a lot of help with that from a specialist school in Britain called New College. It's really the only place of its kind for exactly what it does. It's for students who are blind and visually impaired, and so I spent a year going in and out of there and interviewing the children, asking them a lot of stupid questions. But they were so, so helpful and generous. And sitting there talking to them I began to think, Well maybe with their help, I can do it.

I did have my coincidence; it was a string of things that happened. Everyone has coincidences, so speaking to people about that, everyone seems to think they're cool when they happen. It doesn't have to be an enormous thing for you to get those chills and think, Oh, that was kind of spooky. That thing in the train [that Laureth's father experiences in the book], that really happened to me. And as I say in the book, that was so freaky, I thought, That's just too, too weird.

I spent a lot of time thinking about coincidences. I read a lot of what famous thinkers have to say about coincidences. And I came to the Robert Boyd conclusion that in fact it is all just chance; there is no great meaning to it. But I still think that, even now, when a little coincidence happens to you, the next thing you think is, Well what does that mean? It's this natural human reaction to try to work out what it means because it seems like it can't just be chance, it has to be some symbol or signal.

As a writer yourself, do you see any parallels between yourself and Laureth's father?

I tend to feel writers writing about writing is what they do when they run out of ideas. And, to me, it feels like you have that rock band and their first album is really edgy and revolutionary, and then three albums later they write about how tough it is to live in hotels. It just felt a bit devoid of inspiration.

But I thought this idea of writing about a writer meant I could discuss all this stuff to do with coincidences but not actually fall into the problem where coincidences are the main structure. Once you decide to write about a writer, it would be really weird if you didn't use some of your own experiences as a writer to flesh him out. So in one sense, yes he's me, but in another sense, no, he's not me at all.

For readers that come to the end of the book there's an Easter egg waiting for you. Without spoiling it, how did you come up with that idea and was it planned from the start?

It's just amusing to yourself to hide little things within your book if you're a writer or your song if you're a song writer. And I've done that with every book, but in this book, I decided to move it up a level. So while there's a message at the end, there are some very hidden and some less hidden references to the number 354. Because I kind of do feel like the number has been following me my whole life. And I've had a few coincidences occur around that number. [Editor's note: This number is also important to the character of Laureth's father in the novel.]

And I thought it also might be fun because in a way it makes it seem as if a coincidence has happened to you, reading it. Of course that coincidence is highly contrived by me, therefore that and the other hidden 354s needed a lot of planning ... It drove my editor crazy, so I'm not sure I'll be doing that again.

I ask this of many of the writers I talk to: There has been some controversy lately about YA, with people saying some books shouldn't be classified "YA" because they are better written or tackle difficult subjects. You often write about difficult human issues and have received obvious success in many age groups. Do you ever feel a stigma writing YA?

It's a big, big issue, isn't it? In Britain as well as America. When I get asked a question like this I feel like I can't reply with an answer less than 45 minutes, but I'll try.

The absolute bottom line — because you can have all those arguments about appropriate labels, what is included in YA, and when does a YA book become an adult book? ... But, as a writer, it's not how I set out to write a book. I don't set out to say, "I'm going to write a YA novel," I set out to write a story I think is interesting or has an idea that has gripped or obsessed me. ... And I don't think readers go around thinking, Is this book written for me? Was I the person this book was designed for? As a reader, you're just looking for something you love, or something you hope you'll fall in love with.

But of course, between the writer and the reader is the long and necessary chain — I'm not criticizing it — of the agent, the editor, the publishing house, the marketer, the sales department, the book seller, the librarian, etc. in that process who need to speak about categories for books to exchange hands. And that's when these labels start getting applied. ...

To compare: For example, an adult novel I've written, to me, is structurally and narratively much simpler than Midwinterblood, which is a YA novel.

I can't deny this adult novel is an adult novel, but if you ask me why, I can't put my hands on it...

The one thing that really drives me crazy is the perception that YA novels have to have teenage protagonists — and many, many do because that's a strong branch of YA, and I've done that with She Is Not Invisible. But Midwinterblood has almost no child characters at all. I think back to when I was 14, 15, and 16 and think about what books I was reading and it was anything and everything.

I'm doing the final, final drafts of a new YA novel — to use that label — and that will appear in January of next year, called The Ghosts of Heaven. It's a very different book than She Is Not Invisible, it's a bit more like Midwinterblood in that its a quartet of novellas that have a loose thematic link but are set in vastly different times and places. Short after that, an adult novel will come out. In 2016, I've got a graphic novel coming out, and it's a younger thing, more middle grade.