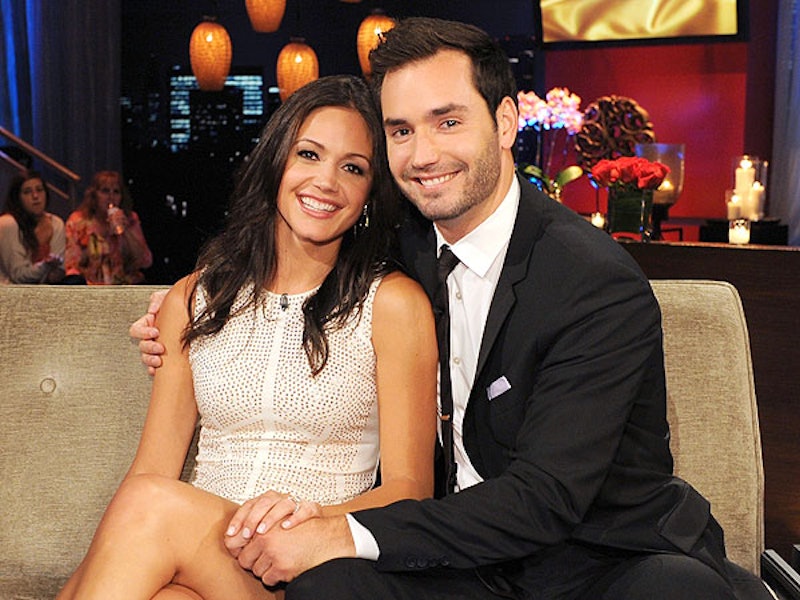 You can take a Bachelorette couple off of the show, but they apparently can't leave that mindset behind. Desiree Hartsock and Chris Siegfried debuted an engagement photo Sunday and they are the most Bachelor-ified things I've ever seen. When Sean Lowe and Catherine first showed off their engagement photos it gave everyone a lot of hope that maybe Sean wasn't so freaking boring after all. They were wearing bear heads and riding a bike. It was adorable! But Chris and Des took a different route and it's so Bachelor I can practically hear Chris Harrison's voiceover.

Clearly trying to prove they can beat the reality love curse and make it all the way down the probably-televised aisle, the happy couple went all out for their photos. They skipped a boring studio shoot and instead headed for Rattlesnake Ledge just outside Seattle. The shot is pretty, the valley stretches beyond the couple as they stand on a tiny ledge embracing each other. If it was just one of them in the shot it could totally be used for a Bachelorette promo poster. It's so scenic and romantic. Plus it brings to mind a lot of those super fun cliches the show loves like "our relationship is solid as a rock" and "falling in love is like falling off a cliff together."

But even the way the couple is distributing this photo reeks of reality show syndrome. Desiree announced the photo via Twitter and called it a "sneak peek." Yes, like she's doing a promo for next week's episode, Des is keeping us in suspense to see the rest of her photos.

Does she know that actual people don't usually promote themselves in stages like this? She's not trying to draw viewers for a show, this is real life. She could give us all of the photos or none of the photos but this sneak peek stuff seems a little silly. We already know which guy she picks. There's no more drama to unfold here, so we don't really get why she's being so self-promotional like this.

But hey, at least she didn't offer an inside look in exchange for a "like" on Facebook. That's what her photographer did which seems the opposite of classy. I guess we'll just have to wait and see if the rest of her pictures are as reality show-esque. Let's just hope she doesn't prolong this sneak peek stuff for a Bachelor-season length of time, we already had to suffer through Juan Pablo's show. Bachelor Nation doesn't need this right now.

More like this
'RHOSLC’s Heather & Whitney Are Still On A “Friendship Break” After Season 3 Reunion
By Jake Viswanath
Everything To Know About A Potential 'RHODubai' Season 2
By Kadin Burnett and Brad Witter
Everything To Know About 'RHOSLC' Season 4
By Jake Viswanath
Erika Jayne's Estranged Husband Tom Girardi Has Been Indicted On Fraud Charges
By Jake Viswanath
Get Even More From Bustle — Sign Up For The Newsletter
From hair trends to relationship advice, our daily newsletter has everything you need to sound like a person who’s on TikTok, even if you aren’t.